Cataclysmic Fires are Raging Across the Northern Hemisphere 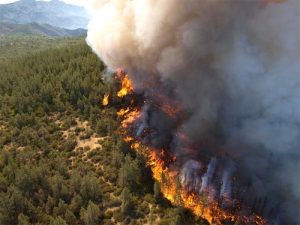 While many are still confused by the ongoing assault of climate disinformation, the planet is burning to the ground, literally. We are all now drifting in uncharted waters. An ever worsening climate hell is unfolding around us by the day while the vast majority of the population is completely oblivious. Denial is epidemic on all sides of the fence in one form or another. Some of the most deeply rooted denial is in the climate science community. Countless academicians are completely silent and blind to the ongoing geoengineering circus being conducted in skies around the globe day in and day out. The IPCC (Intergovernmental Panel on Climate Change) is the largest scientific panel on any subject in human history. Virtually all their modeling is essentially worthless. None of it even considers the horrific effects of geoengineering or the climate feedback loops that it helps to feed. Catastrophic ozone depletion, total disruption of the hydrological cycle, methane release, and a completely contaminated planet, all are connected to climate engineering. Many have been trained to think the climate modeling is “alarmist”, the truth is quite the opposite. The planetary meltdown is far worse than almost any modeling suggests. Though there are of course countless other sources of human activities wreaking havoc on the biosphere, global geoengineering programs are the greatest assault of all on our planet. The article below should be a wake up call, the forests of Earth are burning to the ground.
Dane Wigington
geoengineeringwatch.org

This year, the warm air invasion started early. A high amplitude ridge in the Jet Stream stretching for thousands of miles over the temperate Pacific and on up into Alaska and the Chukchi Sea slowly drifted eastward. Reinforced by a powerful bank of blocking high pressure systems over the northeastern Pacific, this ridge settled over Canada’s Northwest Territory in a zone from the Mackenzie Delta and over a broad region east and south. From mid June onward, temperatures in the 70s, 80s and even low 90s dominated sections of this Arctic region.

The heat built and built, drying the shallow soil zone over the thawing permafrost creating a tinder-dry bed layer waiting for the lightning strikes that were bound to follow in the abnormal Arctic heat.

By late June, major fire complexes had erupted over the region. Through early and mid July, these massive systems expanded even as the anomalous heat dome tightened its grip. Today, the fires in Northwestern Canada have reached a horrific intensity and one, the Birch Complex fire, alone has now consumed more than a quarter of a million acres.

According to reports from Canada’s Interagency Fire Center, total acres burned to date are more than six times that of a typical year. A rate of burning that, according to a recent scientific study, is unprecedented not just for this century, but for any period in Canada’s basement forest record over the last 10,000 years.

(Thunderstorm? No. Smoke from a major volcanic eruption injecting ash into the stratosphere? No. The upper frame shot is an aerial photo taken of the Birch Creek Fire Complex on July 14, 2014 from a distance of about 30 miles away. It is just one of the massive fires now raging in the Northwest Territory region of Canada. A closer picture, taken from a few miles out, reveals the flaming base of a massive smoke plume. Image source: NWT Fire Facebook.)

From helicopter and airplane, the volume of smoke pouring out of these massive tundra and boreal forest fires is amazing, appearing to mimic major thunderstorm complexes or volcanic eruptions. Closer shots reveal towering walls of flame casting billows of smoke thousands of feet into the air above.

The smoke from these fires, now numbering in excess of 186 separate blazes, is becoming entrained in the weakening circumpolar Jet Stream. The steely gray billows now trail in a massive cloud of heat-trapping black carbon that stretches more than 2000 miles south and east. Its southern-most reaches have left residents of the northwestern and north-central US smelling smoke for weeks, now. Meanwhile, the cloud’s eastern-most reaches approach Baffin Bay and the increasingly vulnerable ice sheets of Greenland.

Across the Arctic, Siberia Also Burns

As media attention focuses on the admittedly horrific fires of unprecedented magnitude raging over Canada, a second region of less well covered but possibly even more extensive blazes burns on the other side of the Arctic Ocean throughout the boreal forest and tundra zones of Central Siberia in Russia.

There, record heat that settled in during winter time never left, remaining in place throughout summer and peaking in the range of 80-90 degree Arctic temperatures over the past couple of weeks. Over the last seven days, massive fires have erupted which, from the satellite vantage, appear about as energetic as the very intense blazes that ripped through Siberia during the record summer fire year of 2012. It is a set of extreme conditions we’ve been warning could break out ever since March and April when intense early season fires ripped through the Lake Baikal and Southern Yedoma regions.

Now, what appears to be more than 200 fires are belching out very thick plumes of smoke stretching for more than 2000 miles over North-Central Siberia and on into the recently ice-free zone of the Laptev Sea:

(Massive sea of smoke and fire stretching from Lake Baikal and northeast over Central Siberia and on into the Arctic Ocean. Image source: NASA/LANCE-MODIS.)

As with the other set of fires in Canada, the smoke from these massive blazes is entraining in the Jet Stream and stretching across Arctic regions. An ominous blanket of steely gray for the roof of the world and yet one more potential amplifying heat feedback the Arctic certainly does not need.

During recent years, scientists have been concerned by what appears to be an increased waviness and northward retreat of the northern hemisphere Jet Stream. This retreat and proliferation of ridge and trough patterns is thought to be a result of a combined loss of snow and sea ice coverage over the past century and increasing over the past few decades. In 2012, sea ice coverage fell to as low as 55% below 1979 levels with volume dropping as low as 80% below previous values. Over the past seven years, not one day has seen sea ice at average levels for the late 20th Century in the north.

Meanwhile, northern polar temperatures have risen very rapidly under the rapidly rising human greenhouse gas heat forcing, increasing by 0.5 C per decade or about double the global average. It is this combination of conditions that set the stage for fixed ridges over both Russia and Canada creating extreme risk for extraordinary fires.

Should both the current sets of fires continue to rage under anomalous high amplitude jet stream waves setting off extreme heat in these Arctic regions, it is possible that large clouds of heat absorbing black carbon could ring the Arctic in a kind of hot halo. The dark smoke particles in the atmosphere would trap more heat locally even as they rained down to cover both sea ice and ice sheets. With the Canadian fires, deposition and snow darkening are a likely result, especially along the western regions of the Greenland Ice Sheet — zones that have already seen a multiplication of melt ponds and increasing glacial destabilization over recent years.

Recent scientific studies have also highlighted the possibility that human-caused climate change is increasing high amplitude jet stream ridge patterns that are transporting more and more heat into Arctic tundra and boreal forest regions. These regions are more vulnerable to fires due to the fact that trees in boreal forest have uniform characteristics that favor burning and tend to rapidly ignite and spread once the upper branches become involved. The unfrozen soil features a narrow basement layer above tundra which dries more rapidly than the soils of more temperate areas, providing tinder fuel to aid in the initial ignition by lightning strike. Thawing, deeper tundra, when dried, is a meters-deep pile of fuel that has accumulated for thousands of years — a kind of peat-like layer that can smolder and re-ignite fires that burn over very long periods. It is this volatile and expanding basement zone that is cause for serious concern and greatly increases the potential fire hazard for thousands of miles of thawing tundra going forward.

4 Responses to Cataclysmic Fires are Raging Across the Northern Hemisphere