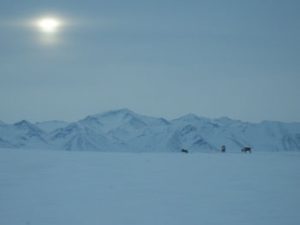 The Climate System Is Being Torn Apart

Climate Engineering is the most destructive single force ever released on planet Earth. Though countless forms of human activity have caused immense damage to our biosphere, and nuclear cataclysm may trump all at some point soon, for now the ongoing global geoengineering programs are mathematically the greatest assault on all life ever launched by the human race. Available evidence indicates that there are many agendas being carried out by the atmospheric spraying and ionosphere heater installations (HAARP facilities). Some of these objectives appear clear, other functions and goals of these programs are as of yet speculative. Based on all available evidence, there are no benevolent aspects of the climate engineering insanity. Rather, the programs are designed for the further enhancement of the “full spectrum dominance” of the global power structure. “Owning the weather” has long since been the stated goal of the US military. Though weather warfare is recognized by many as a verifiable and historically documented reality, the profound effect geoengineering is having on the overall climate system is still overlooked by many, even in the anti-geoengineering movement.

What does all this have to do with Arctic sea ice? Plenty. Unfortunately there is a large percentage of activists that are still inclined to accept without question any headline that goes against Al Gore and global warming. First, Al Gore the hypocrite does not belong in the equation at all. The power structure was quite successful at using Gore to polarize the public, its time to move on. Next, coming to conclusions without truly examining the facts in regard to the true state of the climate is no different than those that conclude climate engineering is a “hoax” with out any investigation. What is the real story on Arctic sea ice up to 2013? Even if we choose to ignore all other sources of damage to the climate system beside geoengineering, these global atmospheric programs are themselves warming the planet overall. (Though the climate engineers can and are temporarily and toxically cooling large regions at the cost of worsened overall planetary warming).

Has Arctic Ice Miraculously Recovered In The Last Year? Not exactly. 2014 will still go down as one of the lowest ice extents on record. As recently as February of 2014 Arctic ice extent was yet again back at record lows as indicated clearly by the chart below. 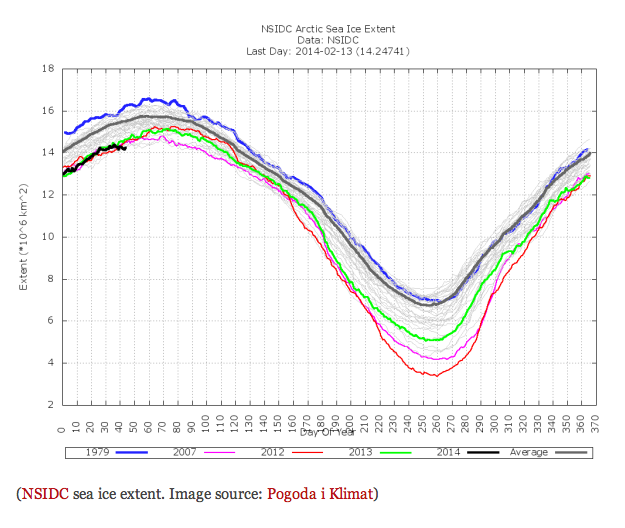 Ice “extent” (surface area of floating ice) is only one part of the equation. What about “ice volume”? This is the more important factor, is the volume going up? No. 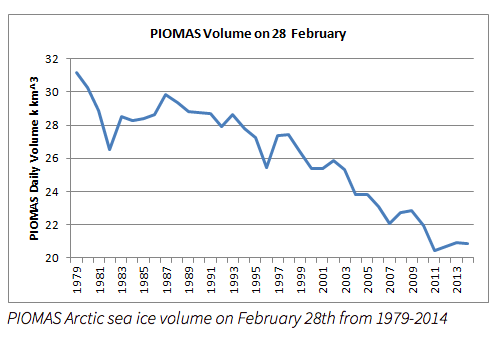 Lets add a few more questions to this. Last fall mainstream media headlines trumpeted the Arctic sea ice had recovered. Was the ice recovery so incredible? Was it just a natural occurrence? Or was it the result of the ongoing climate engineering manhattan project? First, the “50% recovery” was only in comparison to the previous year, 2012. In 2012 the Arctic sea ice nearly disappeared, reaching a record shattering low. The 2013 50% increase over the nearly ice free 2012 season still made 2013 one of the lowest ice extent years ever. In addition, the all out climate engineering assault is always completely omitted in this equation, even by those that claim to recognize the geoengineering reality. On the graph below, the “ice extent” shows extremely anomalous fluctuations in the last two years. As Already mentioned, Arctic ice has gone from a supposed miraculous recovery in the fall of 2013, to a new record low in February of 2014, back to a new miraculous recovery now. Its interesting that mainstream media did not mention a thing about the new record low in February, nothing. 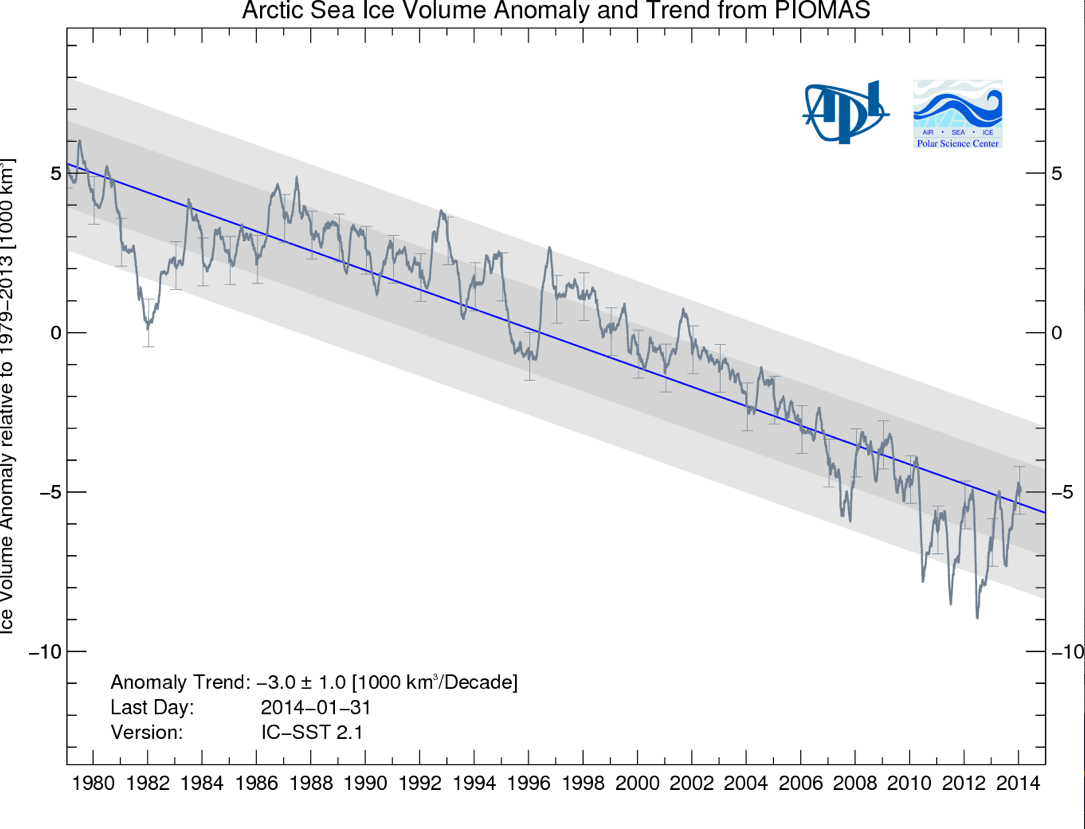 So how does Arctic sea ice recover at all given the fact that Arctic sea temperatures, global ocean temperatures, and land temperatures have continued to break all time highs in recent years? In fact, April 2014 was tied for the all time hottest April on record.   May 2014 was the all time warmest May on record. What about June? Also the hottest June on record globally. Perhaps the oceans are just extra cold, helping the sea ice to freeze? No again. Global ocean temperatures were at all time record highs in July of 2014. It is important to consider that a cubic meter of sea water holds 4000 times the thermal energy of a cubic meter of air, ocean temperatures are the bottom line and they are going off the charts to the warm side. Again, how can the Arctic sea ice not already be gone given these conditions and the fact that the ice already almost disappeared in 2012? Good question, welcome to geoengineering. 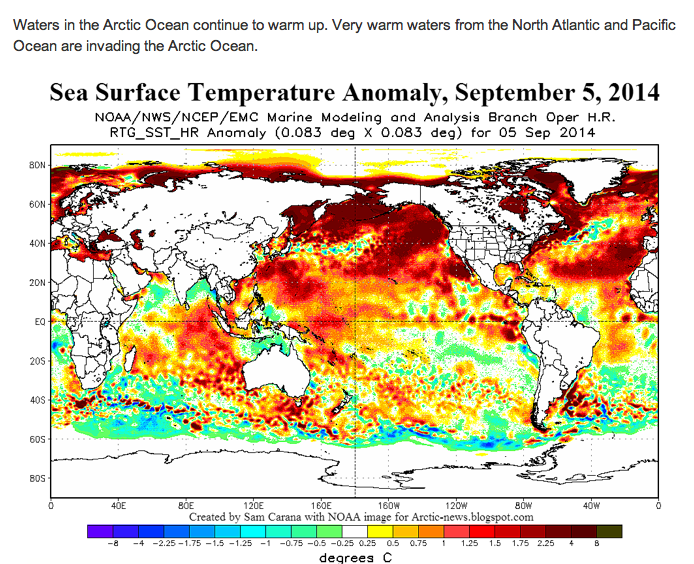 In addition to blotting out the sun with the light scattering particles used in the climate engineering programs, artificial/chemical ice nucleation  is certainly also playing a big role. At the start of the 2014 Arctic melt season all the “melt ponds” that routinely form on the surface of the ice (and speed melting of the ice pack due to reducing the ice reflectivity) miraculously froze over again. This event perplexed the scientific community as the temperatures were not believed to be anywhere near cold enough to cause this occurrence. “Artificial/chemical ice nucleation? Why would we believe otherwise when patents exist for this very process. Ice is now remaining at far above freezing temperatures in many locations. Remember the Great Lakes Ice in late May of this year that still remained in spite of record warm 85 degree temperatures? All the materials used in the climate manipulation programs are highly toxic, but that does not appear to be of concern to the geoengineers. In fact, for the power structure, the steady sickening of populations is likely considered another benefit of the atmospheric spraying. Aluminum is the primary element listed in geoengineering patents. The human health and cognitive affects of this toxic metal are well documented and yet it continues to be sprayed on us and the entire planet day in and day out.

SRM over the Arctic 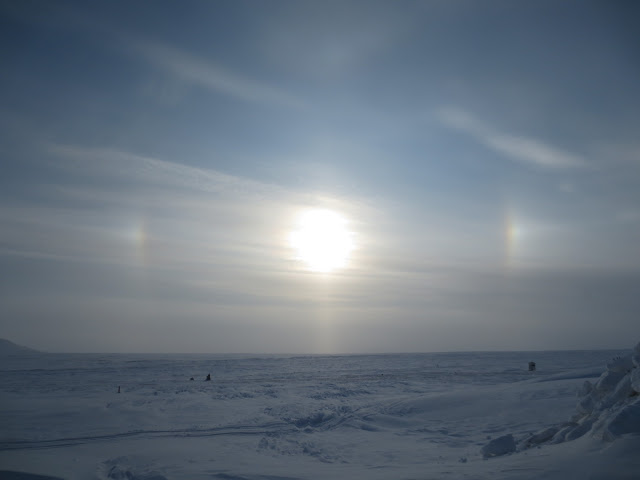 Skies In The Arctic (and Antarctica) are constantly completely obscured with the ever increasing toxic particulate canopy created by the out all out climate engineering. An “Arctic Haze” that included heavy metals was being reported by researchers as early as the 1950s.

So What Is The Bottom Line In The Arctic?

The military industrial complex and the climate engineers are trying desperately and destructively to maintain what is left of the ice in the Arctic. Ultimately they are doing this for their own purposes, not for the common good. Though the all out climate engineering assault has cooled the Arctic (temporarily and toxically), Arctic sea ice is still just whiplashing between record lows and slight expansions that still fall in near record low territory. Methane is already expelling on a massive scale all over the Arctic. Climate engineering is only making it worse in the long run and poisoning the entire planet in the process. Once Arctic ice finally blows apart, an endless list of lies will be exposed and the very paradigm we live in will be overturned forever. People need to do honest and thorough investigations of headlines. When personal bias compels us to swallow sensationalistic news stories that serve the power structure, this is not helping the cause of exposing and stopping climate engineering. This battle for truth is a responsibility that belongs to us all, not just a few. We must all make our stand on facts, not ideology and power structure funded propaganda (which always excludes the dire subject of global climate engineering).

AMEG calls for emergency geoengineering over the Arctic
http://ameg.me/index.php?start=4

April 2014 tied for hottest ever recorded on Earth
http://www.washingtonpost.com/blogs/capital-weather-gang/wp/2014/05/20/earth-matches-highest-april-temperature-on-record-in-2014/

Owning the weather as a force multiplier
http://csat.au.af.mil/2025/volume3/vol3ch15.pdf