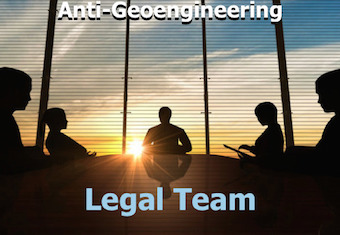 Air quality officials everywhere have failed to fulfill their legal obligation of informing the public about indisputable and verified health hazards relating directly to the toxic fallout from climate engineering. More and more facts are coming to light which further exposes what should be considered criminal complacency on the part of officials that have been entrusted with safeguarding public welfare. SInce at least 2008, volumes of test data proving the presence of toxic heavy metals in the environment has been presented to various California state and county officials who have to date done absolutely nothing to disclose the contamination let alone investigate it. The public is rapidly waking up to this situation and they are understandably extremely concerned  and upset.  A major event in Northern California on August 14th, 2015 will bring together numerous experts to give their testimonies on the climate engineering dangers. This event will bring much needed attention to this critical issue. Below is letter from a member of the anti-geoengineering legal team to air quality officials, it is an official invitation to the August 14th event.
Dane Wigington
geoengineeringwatch.org

Re: Meeting on August 14th at David Marr Auditorium, Redding

Re: CHEMICAL SPRAYING of BARIUM, STRONTIUM AND ALUMINUM FROM JETS ONTO THE AMERICAN PUBLIC FOR WEATHER MODIFICATION

I first wrote to your office on May 6, 2011 to discuss and inquire what your office was doing to investigate and report on the Geo-Engineering program of the US government by spraying the above referenced materials into the sky to reduce the impact of global warming and to implement weather modification programs.

We would like you to attend this meeting to discuss with the public the impacts of the Geo-engineering programs and the chemical residue left on the surface of our planet and which is frequently ingested by the public, with unknown long term physical effects.

Last year approximately 400 citizens met with the Shasta Board of Supervisors (BOS) to request the BOS investigate the chemical spraying in Shasta County.   The Shasta County Board of Supervisors after pressure from the public agreed to investigate the phenomenon known as Geo-engineering, sometimes called “chem-trails.”  To my understanding no report was done, and possibly, no investigation was ever implemented.

We would like to know about your agency’s involvement in investigating and reporting on the chemical spraying of the Shasta County population in what we believe is the federal government’s efforts to control or modify the weather. This is the spray emanating from jets flying overhead where the white plumes expand and drip and cover the sky, rather than evaporate like what were formerly called “condensation” trails.  This is frequently called “Chemtrails”.

There is a plethora of evidence gather by citizens of alarming levels of aluminum barium and strontium in the blood level of its citizens, and these chemicals are being traced to the abundant spraying of these chemicals from jets into the atmosphere in a campaign to modify or control the weather by the federal government.  The Air Force wrote a book where they quote on the cover page, that they “will control the weather by 2025”.

In 1991, a patent was issued to Hughes Aircraft, US Patent # 5,003,186, now held by Boeing called the “Welsbach patent”, where the exact chemicals patented for the program, (barium, strontium and aluminum) in this climate geo-engineering scheme are now being found on the ground in Shasta County in quantities vastly exceeding the allowable amounts by any regulatory standard, or by any naturally occurring levels.  This “Welsbach Patent” was designed to have these chemicals among others, to be placed into jet exhaust or merely sprayed from nozzles under the aircraft which is  separate from the exhaust trail, and which said chemicals would be sprayed into the atmosphere and then spread out widely to reflect back sunlight to reduce the impact of global warming.

HEALTH AND SAFETY CODE § 25570.  (a) The Legislature hereby finds and declares all of the following:

(1) The public has a low level of confidence in the ability of government or the private sector to ensure that manufacturers, users and disposers of hazardous substances comply fully with legal requirements for the management of these substances.

(2) Recent federal studies by Congress and executive agencies document that voluntary compliance with environmental regulations nationwide is at an all time low of 25 percent. Such factors as inadequate enforcement and inadequate understanding of complex requirements result in a level of compliance with environmental requirements which is lower than in the early 1970's.

Your agency is obligated to protect the public under several California statutes, among them, the following:

HEALTH AND SAFETY CODE § 39656.  “It is the intent of the Legislature that the state board and the districts implement a program to regulate toxic air contaminants that will enable the state to receive approval to implement and enforce emission standards and other requirements for air pollutants subject to Section 112 of the federal act (42 U.S.C. Sec. 7412).”

Under H&S § 39660, your agency is obligated to investigate and protect the safety of California citizens.   Section a states as follows: “(a) Upon the request of the state board, the office, in consultation with and with the participation of the state board, shall evaluate the health effects of and prepare recommendations regarding substances, other than pesticides in their pesticidal use, which may be or are emitted into the ambient air of California and that may be determined to be toxic air contaminants.

Subsection C goes on as follows: (c) (1) The evaluation shall assess the availability and quality of data on health effects, including potency, mode of action, and other relevant biological factors, of the substance, and shall, to the extent that information is available, assess all of the following:

(A) Exposure patterns among infants and children that are likely to result in disproportionately high exposure to ambient air pollutants in comparison to the general population.

(B) Special susceptibility of infants and children to ambient air pollutants in comparison to the general population.

(C) The effects on infants and children of exposure to toxic air contaminants and other substances that have a common mechanism of toxicity.

(A) The exposure level below which no adverse health effects are anticipated.

(B) An ample margin of safety that accounts for the variable effects that heterogeneous human populations exposed to the substance under evaluation may experience, the uncertainties associated with the applicability of the data to human beings, and the completeness and quality of the information available on potential human exposure to the substance.

Subsection (e) gives you the power to demand information from outside sources. “(e) (1) The state board or a district may request, and any person shall provide, information on any substance that is or may be under evaluation and that is manufactured, distributed, emitted, or used by the person of whom the request is made, in order to carry out its responsibilities pursuant to this chapter.  Subsection (e))3) provides that this should be public information, “(3) Any information not identified as a trade secret shall be available to the public unless exempted from disclosure by other provisions of law.

You are also obligated under HEALTH AND SAFETY CODE § 39602.5, to adopt rules to achieve ambient air quality standards as set for the by the Federal EPA.

See HEALTH AND SAFETY CODE § (a) The state board shall adopt rules and regulations pursuant to Section 43013 that, in conjunction with other measures adopted by the state board, the districts, and the United States Environmental Protection Agency, will achieve ambient air quality standards required by the federal Clean Air Act (42 U.S.C. Sec. 7401 et seq.)

In light of your obligations under HEALTH AND SAFETY CODE § 39604.  (a) The state board shall post on its Web site, at a minimum by January 1 of each odd-numbered year, information on air quality conditions and trends statewide and on the status and effectiveness of state and local air quality programs.

(b) The data shall include, but not be limited to, all of the following:

(1) A review of air quality trends in each air basin over the most recent five-calendar-year period for which a complete data record is available.

Continuing with this Code section, it states that you are also obligated to prepare the following:

(3) A listing of any changes in state ambient air quality standards adopted by the board over the previous two calendar years.

Thank you for your cooperation.  If you have any questions, please do not hesitate to contact me.