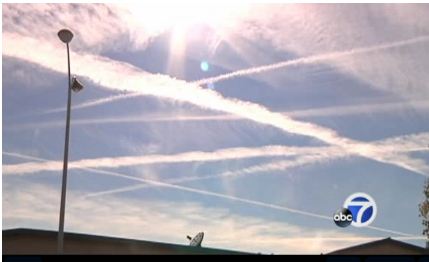 Now that the massive “elephant in the room” has become far too big to hide, ABC (and the rest of the corporate media), continues to reassure us that it’s all just fine. “They are just contrails” they say, virtual grid patterns of spreading, lingering, expanding haze that is now seen around the globe in most locations on a daily basis – often so thick that the entire sky is virtually covered with featureless, rainless, toxic cloud cover. Although very short lived contrails have occurred for decades at very high altitudes under certain extreme conditions, for some odd reason ABC news suddenly felt the need to address this issue.  In the example of San Francisco as provided by ABC, the trails reported and photographed are clearly quite low, and over a coastal region where the air temperatures, even aloft, would be far too warm for any naturally occurring “vapor trail”. According to the original NOAA (National Oceanic and Atmospheric Administration) data, conditions necessary for a “naturally occurring” condensation trail are 70 percent humidity and 70 degrees below zero. Do we really believe such conditions are present in the skies just above the Bay area at such a low elevation?

Surprisingly, NOAA has now changed some of their statements in recent years regarding the conditions under which a “contrail” can form. It appears that what is happening here is NOAA has been altering the data  to match what people have begun to take note of and rightfully become concerned about. The EPA followed the same tack after the Fukushima disaster by simply “raising” the “safe” limit for radiation exposure. Altering the truth in the attempt to hide dire realities from the public for the benefit of those in power will soon enough be seen by all as the crime against humanity that it is.

At this point there is no “natural” weather. The amount of particulate saturation in the atmosphere today is so high that the entire global weather system is being radically affected. Large regions are being droughted out while other areas are deluged. The rain that does fall on parched forests is laden with bioavailable toxins thus continuing to fuel the boreal forest die off. The ever increasing UV radiation levels, caused by the shredding of the ozone layer (also from the geoengineering/chemtrail programs), is taking its toll on all life forms.

Stations like ABC’s “KGO-TV need to be contacted and hounded for the blatant “cover up” service they are so willingly providing for those in power. Such corporate media outlets will never mention the term “geoengineering” for obvious reasons. If such a term was put on the table, the public might find their way to hard science information and terms like “SAG” (stratospheric aerosol geoengineering) and “SRM” (solar radiation manegement). Once such terms and accompanying science is found, the public might then begin to conclude that in fact what they are seeing in the skies is not just a “contrail”.

We can all help to shine the light on this “elephant in the room”. Locate people, groups, and organizations that would care if they only had a clue they were being sprayed like roaches as part of a colossal covert global experiment.  ADD, Alzheimer’s, autism, agriculture, environmental, and other groups all need to be reached out to. Passing on a credible article or two on geoengineering, along with a source of additional information, can all help to wake people up. Encouraging people to purchase, view, copy, and share Michael Murphy’s new documentary “Why In The World Are They Spraying” is also an effective way to wake others up to this dire issue. Its up to all of us.