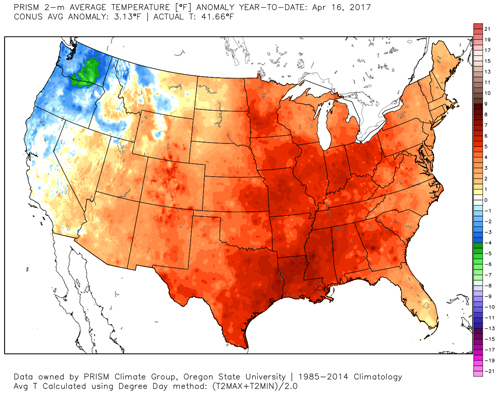 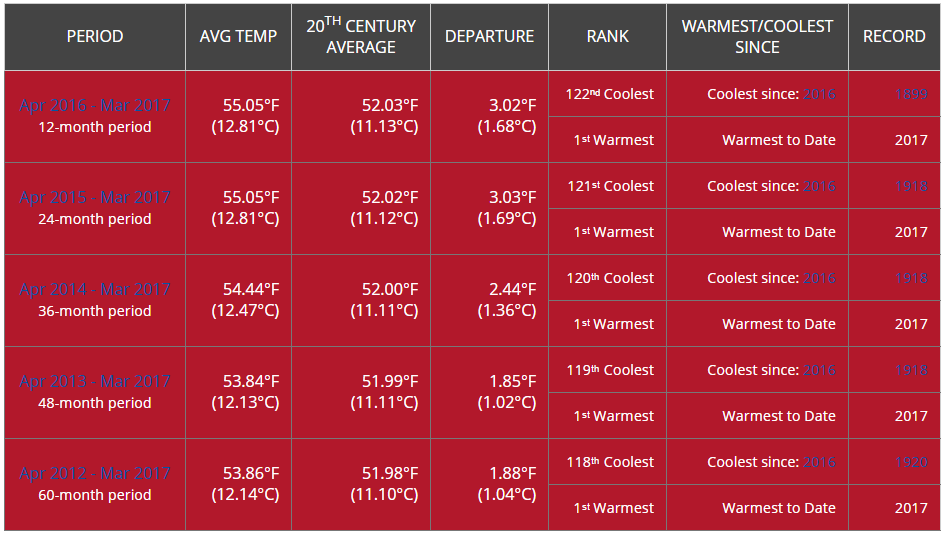 Start of Spring Anomaly based on index of early-leafing plants as of Feb. 15, 2017. 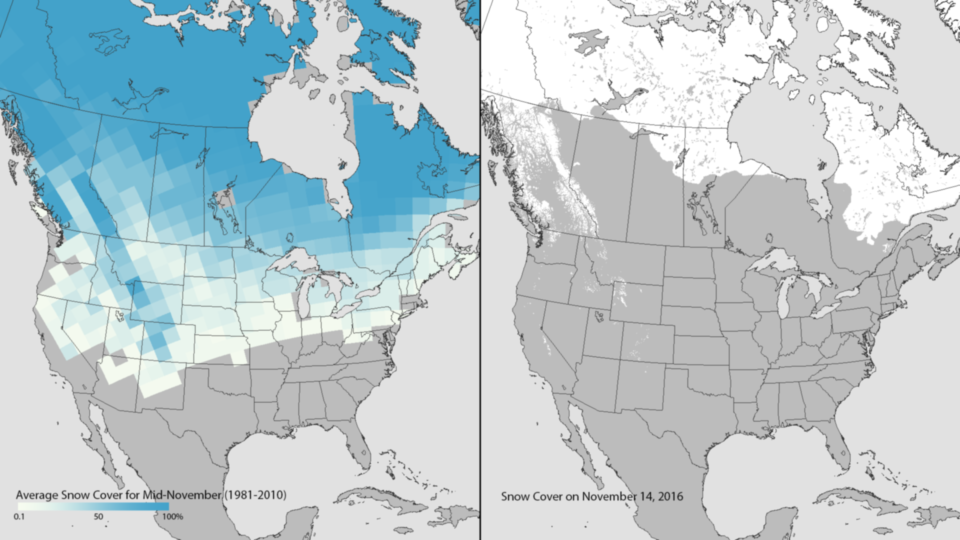 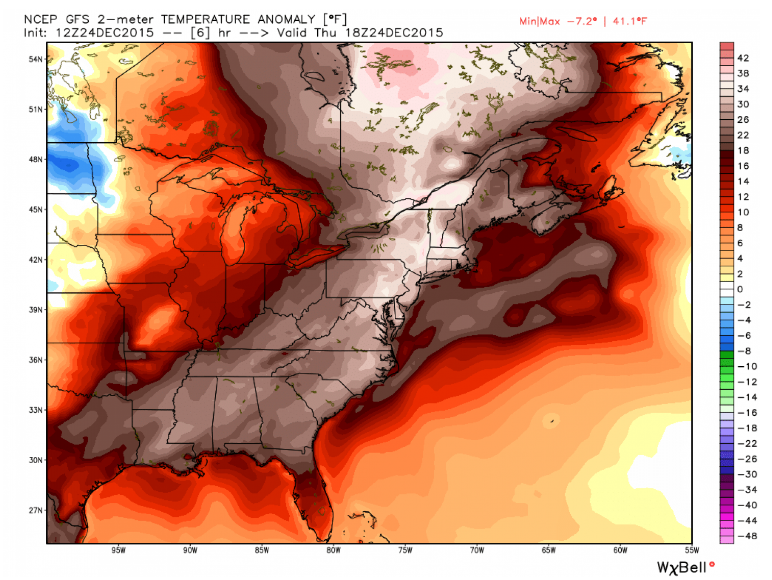 Temperature difference from normal analyzed by the GFS model Christmas Eve morning in 2015. 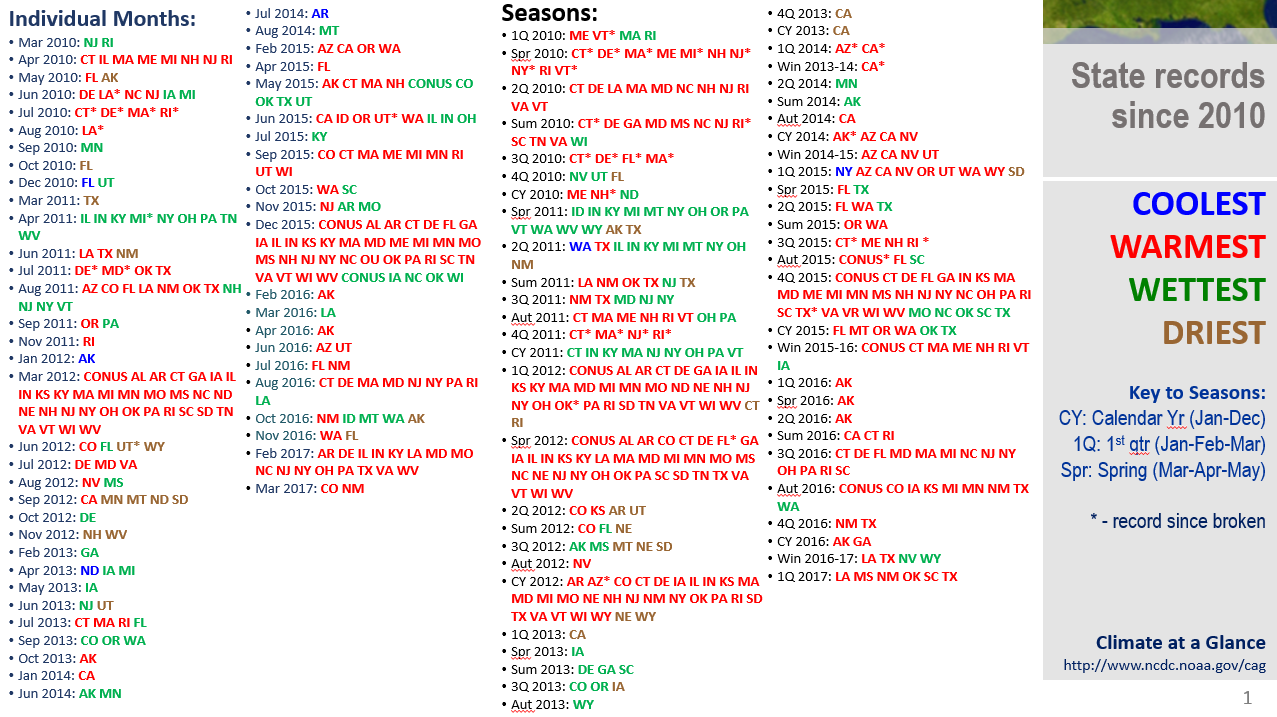 The U.S. is enduring a stretch of abnormally warm weather unsurpassed in the record books, and it shows no immediate sign of ending.

The latest one-, two-, three-, four- and five year periods — ending in March — rank as the warmest in 122 years of record-keeping for the Lower 48 states, according to data from the National Oceanic and Atmospheric Administration.

Freakish bouts of warm weather have accompanied this long period of historic warmth, unlike anything previously experienced.

In February of this year, Chicago witnessed multiple 70-degree days for the first time and a record snowless streak. Denver hit 80 degrees as early as it ever has (in a calendar year). Meanwhile, spring arrived as much as three weeks early in the South.

In November,  the nation was nearly snow-free in the middle of the month for the first time on record. Denver hit 80 degrees as late as it ever has.

In December 2015, 70-degree weather surged into Vermont on Christmas Eve, and 29 states experienced their warmest December on record.

If the climate in recent years was stable, the frequency and intensity of cold weather would balance the warm weather across the nation. But reality presents a much more lopsided situation, and cold extremes have been more scarce.

Deke Arndt, a climatologist at NOAA’s National Centers for Environmental Information, has constructed a list of monthly, seasonal and annual temperature records set in states and regions since 2010. Red, signifying record warmth, is clearly dominant, while there is hardly any blue:

Weather stations in cities and towns have set a dizzying number of records for extremely warm weather but comparatively few for cold weather.

Guy Walton, a meteorologist who previously worked at The Weather Channel, actively tracks the number of high temperature records set, compared with record lows. For 28 months in a row, record high temperatures have outnumbered record lows. No previous streak has been this long (the next longest streak, of 19 months, occurred March 2011 to September 2012, Walton found).

In several instances, such as November 2016 and February of this year, record highs outnumbered records lows by multiples of 15 to 40 or more, Walton calculated:

Walton wonders: “Have we reached a milestone or statistical tipping point, in which all months in the future through the 21st century will have more daily record highs than daily record lows across the U.S.?”

While the U.S. climate is warming and rising levels of greenhouse gases should continue to push temperatures higher, it’s probably too soon to rule out future months with more record lows than record highs. Cyclical patterns could still align to yield fleeting cool patterns, as they did in 2013 and 2014.

But in any given year into the future, the deck is becoming increasingly stacked for abnormally warm weather to dominate. Walton found four of the six longest monthly streaks with record highs outnumbering record lows have occurred since 1998.

This tendency toward more extremely warm temperatures has practical implications for the energy sector. MDA Weather Services, a weather consulting group based in Maryland, tracks quantities known as heating degree and cooling degree days, which approximate the need for heating and air conditioning. The recent warm weather has greatly decreased heating needs but increased cooling needs, compared with normal. Eight of the last 11 months (including this April) all rank among the three warmest using these heating and cooling indicators since 1950, MDA Weather Services tweeted.