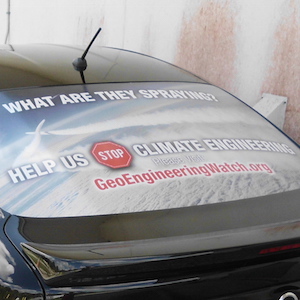 Anti-geoengineering activist Maciej Kocialkowski has given us an an exceptional example of effectively raising awareness on the critical climate engineering issue. Visual information is the most powerful and Maciej is capitalizing on that fact. It takes time and effort to arm yourself with credible data to pass on to others, but the utilization of such materials is exponentially more effective than verbal introductions alone. Given the gravity and immediacy of the danger we collectively face from the ongoing geoengineering insanity, we must use every tool at our disposal to wake others, Maciej has done exactly that. My most sincere gratitude to Maciej, and to every activist that is commited to this most important fight to expose and halt the chemical spraying of our skies.
Dane Wigington
geoengineeringwatch.org 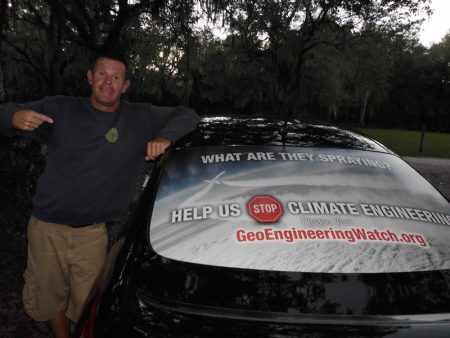 Hi everybody! My name is Maciej Kocialkowski. I am polish national, I have lived in Florida for the last 15 years. I do not have a political or religious affiliation. My life experiences, observations of reality and studies on numerous important topics got me here. I am really the last person you would see going somewhere, picketing about this cause or another, I do everything I can to deflect attention, rather than attract it . And yet here I am, driving my car with this powerful message, carrying flyers and mini cards, passing them to anybody who is willing to at least look at them. So why am I doing that? 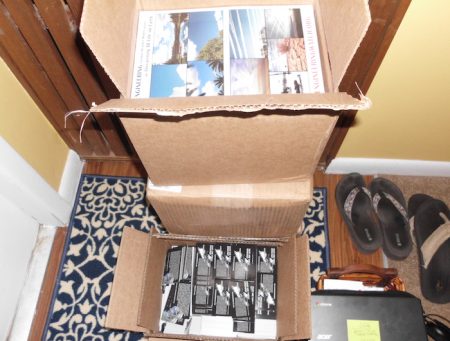 Let me go back with a short bio of myself. Growing up in socialist/communist Poland in the '70s and '80s, I am no stranger to government oppression, manipulation and lies. The very regime collapsed in front of my eyes in late 80's. A new "free" Poland, lead by solidarity movement and Lech Walesa arose. I had my share of experiences with "the bad guys" . What about the west? What about America?, that was the better world. In fact ,that was the world I sought! After all , one could not hide the economic abyss that separated "us" and the west. I settled in south west Florida, where I reside today. I gained a better life economically, and better weather, all at one time, way to go!

How did all that lead to climate engineering? Well, if we really take a closer look at the world, any political, administrative, ideological , cultural , language or even a  religious division, is only that: a division. Man made creation. This applies to human kind, not to natural world or any other animal or plant species. It is also important to point out that any past or present animosity or hostility, and even violence resulting from these divisions always affects the common folks, populations, and citizens, not their leaders. We did historically see trials of some of them, even executions in extreme cases. Generally though, even at the heights of international crisis and conflicts, we never see leaders or high ranking military officials fighting or even mouthing each other off. They always meet in nice settings, eat quality foods, and travel with style. That is only what we see. We really can't know what is going on behind the curtains. If the leaders fail to reach an agreement or some sort of solution, then troops and military are often sent to affected areas. Bloodshed and human suffering are assured.  We could ask a question here.  If leaders do not suffer consequences of their decisions,  then how can we possibly trust them with their judgement ?  What other factors, powerful influences and special interest are at play, that affect their decisions? I will let you seek the answers on your own. On top of that, consider the fact that top politicians (against common believe), are NOT the top of the power structure. The top authority figures remain hidden, their names are either unknown, or at least not associated with tremendous power they yield. It is a "fail safe" strategy, so unpopular politician can be replaced without surrendering a true power.

The point I am trying to make here is this: although there are no shortage of conflicts around the world at any given time, some real and some "manufactured", there is a great degree of cooperation between nations, even those considered hostile or ideologically opposed to each other. For example, Stalin was still selling oil to Nazi Germany, even after they invaded him.

There is a great deal of cooperation and secrecy involved in climate engineering . When you understand how the system works and how the world is "run",then, it will be much easier to tie everything together and you will become,"undebunkable"!  Becoming truly awake is one way trip. There is no way back! Take this as a warning, because you will NOT be pleased with what you find. However, if you are reading this, chances are you are awake, at least to some extend. Another thing is that one cannot really be awake to this issue and not another.  We may not be aware of some facts or aspects or even issues of  great importance. The awakening process is, when once aware, it gives one the ability to tell the propaganda and lies from the facts. One can also know where and how to look for it. I am not going to go to technical details of climate engineering itself( with methane release issue for instance being of top priority). There is enough information on this and other websites to explore and educate yourself.

One has to be mentally comfortable carrying this kind of message and be prepared to answer, at least some basic questions. I came to the point, I became uncomfortable driving without this message. That is why I did what I did. Here are some important key issues (rather than geoengineering itself) that will help everyone to understand why and how climate engineering is being done. Understand the money system we presently have in place. One must become familiar with the FIAT, debt based money system. It runs rampant across the world. "Dishonest Money, Financing the Road to Ruin" by Joseph Plummer is a good start. Also,  understand the concept of a "false flag event", like 9/11 or the sinking  of the"Lusitania"." Tragedy and Hope 101" again by Joseph Plummer. Kudos for Joe for an absolutely stellar job on these two books. Report from "Iron Mountain" is another document from right after WWII. It boggles one's mind. It discusses how manufacturing the threat makes the populations easier to manage. 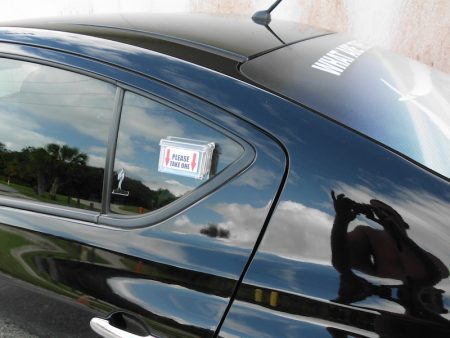 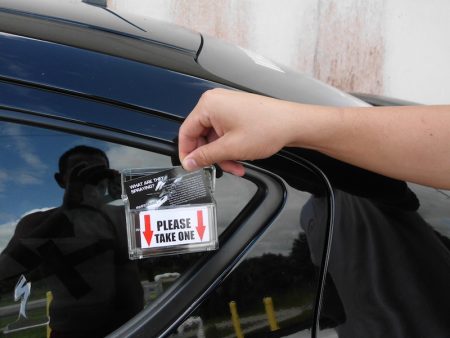 Awakening is an active process on the receiving end. There is nothing we can say or point to, that will make the person awake or aware. Programming populations through propaganda and brainwashing, takes time via orchestrated effort of all the media, education system, etc. This process is even harder to undo, especially given the fact we do not have powerful allies and funding like the PTB (powers that be) have. It is an active process backed with significant effort on an individual level to become awake.

Ok, now in simple terms, I just want this madness to stop. I am NOT comfortable with the fact that somebody has this kind of control over all of us. They can spray whatever they want, how much they want and wherever they want. If we really give it any thought at all, how can it have any legitimacy to it? I oppose anything secret, particularly if it comes to public policies and politics. I guess, I should have opened with that. 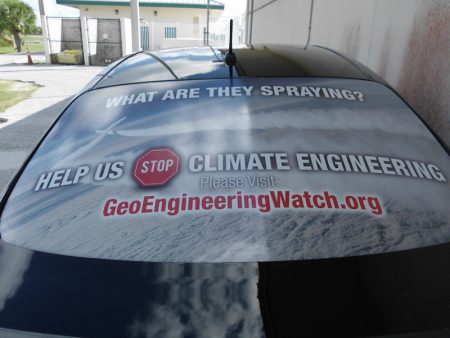 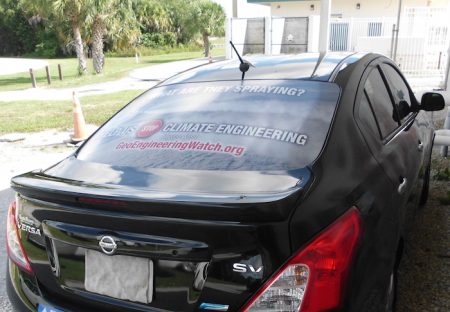 Lastly, I want to mention the company that designed this image and placed it on the car. Jason, from IgniteGraffix.com in Port Charlotte Florida did an absolutely outstanding job! He hasn't heard about geoengineering before and accepted some flyers and mini cards from me. I absolutely recommend Jason and his talent for anybody seeking any graphics on their vehicle. Here on my end, I pledge that I will match my contribution with first 5 people who feel strong enough about the issue to carry this image on their vehicles. This means that they can have the very same image done for $75, which is absolute bargain. Don't give up the fight my friends! Remember, the time is NOW ! and that someone is YOU!
Maciej Kocialkowski