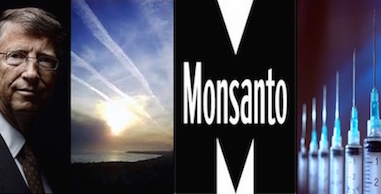 TLB Note: The video contained in this article has many eye opening points and facts concerning Monsanto, GMO’s, Vaccines, Geoengineering, Bill Gates and their connections. Many of us who are aware know or suspect there is a connection (the big picture) but lack the tie points. This video provides some vital tie points and the possible motive! This video is not extremely detailed but does give references you can research (so be prepared to hit the ‘pause’ button). We have and it scares the hell out of us, but you judge for yourself …

Chemtrails saturate the ground with aluminum, fact. There is a concerted effort by Monsanto in conjunction with other (partnered) GMO related companies to produce aluminum resistant plants, a substance rarely seen in the soil?

Today America is the sickest society on this planet … made so in three short generations. Is it coincidence that we are also the most – Geo-engineered, Vaccinated, GMOed,  Fluoridated and Drugged society. Each of these mechanisms on their own has the ability to wreak havoc on our health over time … Now imagine the disastrous impact on our health with all perpetrated simultaneously, the impact is not additive … it is exponential!

Here is a list of patents for climate engineering