Can We Stop Modern-Day Mad Scientists? 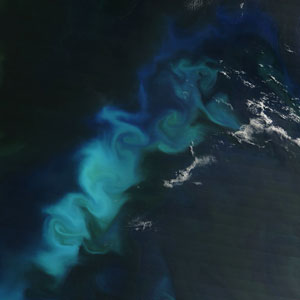 An American businessman made waves last month when, without asking permission, he dumped a bunch of iron sulfate into the Pacific Ocean to launch a carbon-sequestering geoengineering experiment. With these sorts of Earth-hacking ideas being floated, what’s to stop a man with the means from doing it himself?
Russ George, a wealthy American businessman with a history of big, controversial ideas, launched his latest one this October: dumping 200,000 pounds of iron sulfate into the North Pacific. His aim was to spur a huge plankton bloom, which would absorb carbon dioxide in photosynthesis and then sink to the ocean floor. George was attempting to engage in ocean fertilization, the idea that seeding the sea in this way creates those organic blooms that sequester carbon when they sink.

Plenty of scientists have bandied about the idea of ocean fertilization—it’s one of the most common proposals for geoengineering, or engineering the earth to protect civilization from climate change. But George didn’t write a scientific paper about the implications of fertilizing the Pacific Ocean with iron. He just went out and did it, with the backing of the Haida Salmon Restoration Corporation, a First Nations group in Canada that was hoping an improvement in the ocean would also improve the salmon numbers they depend on.

This wasn’t George’s first attempt at unilateral geoengineering. But his solo action has outraged scientists, who have spent years studying not only the potential benefits but also the potential negative consequences of hacking the earth. All of which leads us to ask: What’s to stop modern-day mad scientists?

Rules on the Books?

A hundred years ago chemical and biological weapons had no regulation because they were new ideas, according to Jason Blackstock, a physicist and international relations scholar at the Institute for Science, Innovation and Society at Oxford. Fifty years ago the first rules for human-subject research were put in place.

But newer sciences have yet to spawn a hard set of rules. Consider the current state of fields like genetically modified foods, says Blackstock, which have widely varying national regulations but no international protocols. Or take nanotech: “[In] Michael Crichton’s novel with little robots taking over and eating the world [Prey], they are things that could be pretty damaging if released into the environment, but we just don’t know,” he says. “So there are still a lot of big questions for what should be allowed and what shouldn’t be.”

Geoengineering is so new, and its consequences so big, that there is no set of laws to deal with it yet. “Right now there is no system for that,” says Lisa Speer, Director of the International Oceans Program at the Natural Resources Defense Council. More rogue scientists and businessmen could be motoring through those loopholes in the near future. “I think we’re likely to see more and more of these ideas,” Speer says.

George has already drawn attention for plankton-centric attempts to engineer the climate. “The Weatherbird, his previous escapade, was widely criticized,” says Speer. Country representatives ratified a treaty of the London Protocol on May 1, 2008, that was prompted by the Weatherbird experiment. Dumping a bunch of experimental stuff in international waters violates these rules, but it’s not clear what happens next. At best, it’s questionably legal, but no expert would call it definitely illegal. One could potentially avoid any punishment by calling it legitimate scientific research and exploiting the vagueness of that phrase. Plus, the rules are murky in international waters, as any keen observer of Bond villains knows. International protocols and moratoriums like the ones on ocean dumping exist, but enforcement has to be carried out by the country where a vessel in violation originated.

The amount of iron sulfate George dumped into the ocean was only a drop in the bucket on a global scale, says Ken Caldeira, an atmospheric scientist of the Carnegie Institution for Science’s Department of Global Ecology. “The sewage waste coming into the oceans from coastal towns around the world, I’m sure that’s going to be orders of magnitude bigger than what Russ George did. Humans are adding nutrients to the oceans in large quantities every day, knowingly. Of all the damage that humans did to the oceans on that day, Russ George was probably a millionth of that.”

For Caldeira, it’s the fact that George conducted his experiment in secret rather than the actual amount of iron he dumped that’s really troubling. And that’s what has bigger implications for the future. “Experiments like this make people realize that there are holes big enough you can literally drive an ocean liner through them,” Blackstock says.

Identifying the people who are likely to do this, or have done it in the past, could be a good way to prevent mad science.

The trouble is, you only know about these experiments beforehand if public funding requires transparency or if the directors choose to tell other scientists and the community at large. “This is not the sort of thing the public should find out about after the fact,” says Blackstock.

When people are informed of experimental intent before the fact there’s a resulting back-and-forth of environmental impact assessments and the airing of grievances. The Spice project in the U.K., another geoengineering experiment designed to pump water and, ultimately, sulfates into the upper atmosphere to try to block part of the sun’s light and thereby cool the planet, was suspended before it began a year ago because public reaction worried funders. In another experiment, called LOHAFEX, the scientists modified their iron dumping location in the Southern Ocean after getting feedback from the German science ministry. (The project was put on hold for two weeks because the ministry had reservations, and during that time the lead scientists chose a stable eddy that would trap most of the new carbon and, hopefully, mollify the German government.)

The New Yorker recently called George the first geo-vigilante,”implying he fought for justice when the system failed us. But was he frustrated in his pursuit of knowledge or just exploiting a loophole?

“Scientists still aren’t sure what they can and can’t do,” Blackstock says. “You do end up in cases where somebody says, you know what, I’m just gonna go do it, even within the U.S. What Russ George has done is taken that to an extreme. A big extreme.”

“Ten years ago everything in geoengineering looked like a mad-scientist idea,” he continues. “Frankly, I still wake up some days and see this stuff and I go, seriously—we must be nuts. I mean, spraying aerosols into the upper atmosphere to cool the planet—this is terraforming. This is science fiction. And yet it is really a question… of how they go about it, not the idea itself.”

Blackstock suggests two criteria for judging geoengineers. First, is their experimental design solid? And second, are they working toward the public good? (Caldeira advocates the classic “follow the money” rule for the second point.)

In George’s case, the risks were small: Even though he dumped 200 times more iron than any previous experiment, Caldeira says, George’s experiment would have to be done at a much, much larger scale to have any noticeable effect on the atmosphere. It wasn’t particularly useful as a proof-of-concept test, either. Blackstock says: “There ain’t no way that they’re collecting enough data to make an experiment of this scale worthwhile, with that small number of people and resources.”

As for following the money, George is a self-professed scientist, but most publications call him a businessman, and he stood to make a profit from ocean fertilization with carbon credits. Ostensibly, geoengineering could work toward global public good as well, if it manages to offset climate change without doing more harm in the process.

And that’s why some researchers worry about Bond villains and billionaires going rogue. Whether geoengineering can really combat climate change—and do so without horrific unintended consequences—is an ongoing, contentious debate. But it’s one that a mad scientist with enough money could circumvent.

“With geoengineering, the experiments are in themselves benign but could lead somewhere we don’t want to go. There’s no consensus,” Caldeira says. “If we’re willing to transform huge swaths of the ocean from quasi-natural ecosystems to managed-ocean ecosystems you could maybe offset a few percentage points of the climate-change problem, but I think that most informed observers would say that the tradeoffs aren’t there. The potential for harm exceeds the potential benefits.”

2 Responses to Can We Stop Modern-Day Mad Scientists?