Carnegie Institute Calls For Spraying Aerosols To Block The Sun 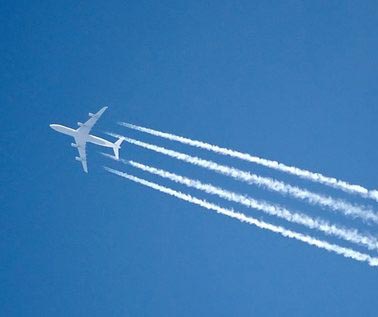 ‘Global warming solution’ is already being done through chemtrails

A Carnegie Institution for Science proposal to spray aerosol particles into the upper atmosphere to block out the sun and “tackle global warming” would turn sunny blue skies into a hazy white, a process that many contend is already taking place via the chemtrails phenomenon.

“Blue skies would fade to hazy white if geoengineers inject light-scattering aerosols into the upper atmosphere to offset global warming. Critics have already warned that this might happen, but now the effect has been quantified,”reports New Scientist.

“Releasing sulphate aerosols high in the atmosphere should in theory reduce global temperatures by reflecting a small percentage of the incoming sunlight away from the Earth. However, the extra particles would also scatter more of the remaining light into the atmosphere. This would reduce by 20 per cent the amount of sunlight that takes a direct route to the ground, and it would increase levels of softer, diffuse scattered light, says Ben Kravitz of the Carnegie Institution for Science in Stanford, California.”

However, far from being a mere proposal, an abundance of evidence clearly suggests that geoengineering projects focused around loading the upper atmosphere with particles, with complete disregard for the health and environmental side-effects, are already taking place.

Scientists now admit that vapor trails from airplanes are creating “artificial clouds” that block out the sun. This is no longer a matter of debate. The chemtrail “conspiracy theorists,” who were ridiculed for pointing out that from the mid-90′s onwards contrails from jet planes were lingering for hours and forming artificial clouds, have been proven correct.

Reading University’s Professor Keith Shine told the Daily Mail that the clouds “formed by aircraft fumes could linger ‘for hours’, depriving those areas under busy flight paths, such as London and the Home Counties, of summer sunshine.”

The report also makes reference to a 2009 Met Office study which found that high-level winds did not disperse contrails that later formed into clouds which covered an astonishing 20,000 miles.

As we have documented, geoengineering programs based around the premise of artificial aerosols were already in operation years ago, including at the U.S. Department of Energy’s (DOE) Savannah River National Laboratory in Aiken, S.C, which in 2009 began conducting studies which involved shooting huge amounts of particulate matter, in this case “porous-walled glass microspheres,” into the stratosphere.

Another program under the Department of Energy’s Atmospheric Science Program is directed towards, “developing comprehensive understanding of the atmospheric processes that control the transport, transformation, and fate of energy related trace chemicals and particulate matter.”

The DOE website states that, “The current focus of the program is aerosol radiative forcing of climate: aerosol formation and evolution and aerosol properties that affect direct and indirect influences on climate and climate change.”

These programs are already having the effect of blocking out sunlight. The emergence of the chemtrails phenomenon coincided with an average 22% drop in sunlight reaching the earth’s surface.

In 2008, a KSLA news investigation found that a substance that fell to earth from a high altitude chemtrail contained high levels of Barium (6.8 ppm) and Lead (8.2 ppm) as well as trace amounts of other chemicals including arsenic, chromium, cadmium, selenium and silver. Of these, all but one are metals, some are toxic while several are rarely or never found in nature.

The newscast focuses on Barium, which its research shows is a “hallmark of chemtrails.” KSLA found Barium levels in its samples at 6.8 ppm or “more than six times the toxic level set by the EPA.” The Louisiana Department of Environmental Quality confirmed that the high levels of Barium were “very unusual,” but commented that “proving the source was a whole other matter” in its discussion with KSLA.

The time for denial is over. Scientists are openly talking about blocking out the sun and in turn replacing blue skies with white haze as part of geoengineering programs that threaten to cause global droughts and famines, and the evidence shows such experiments are already underway on a massive scale.

Even Greenpeace’s chief UK scientist – a staunch advocate of the man-made global warming explanation – Doug Parr – has slammed attempts to geoengineer the planet as “outlandish” and “dangerous”.

The entire geoengineering agenda is being implemented with total disregard for public consultation and with a sneering ignorance of the long term health and environmental impact – all in the name of “solving” a problem – global warming – that is increasingly being revealed to be a contrived hoax.