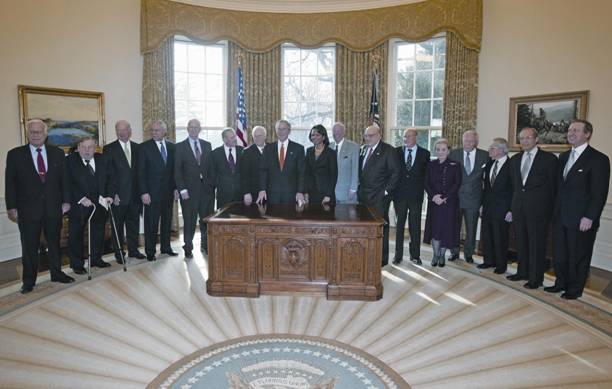 Ever wonder who runs the world? According to former CFR president,  Winston Lord, the CFR runs the world: “The Trilateral Commission doesn’t run the world, the Council on Foreign Relations does that!” A particularly fascinating article with amazing videos of  those making decisions about our lives. I find it very relevant right now considering all the “unexplained” weather anomalies. Thanks to Mariann.

In this video starting at the 2:40, M. Granger Morgan states: “First of all, of course, there is a lot of money getting spent to make sure that a very substantial portion of the public stays totally confused about this. And, I mean, it’s been really quite pernicious. But there’s been literally tens of millions of dollars spent on every little thing that comes along that might, you know, relate to some uncertainty.”

M. Granger Morgan is the head of the Department of Engineering and Public Policy at Carnegie Mellon University.  In this video, he is speaking at a Council on Foreign Relations meeting on “Developing an International Framework for Geoengineering.”  The transcript for the meeting can be found here (on the CFR website):

The Council on Foreign Relations

According to the Mission Statement on the Council on Foreign Relations (CFR) website, the CFR outwardly claims to be “an independent, nonpartisan membership organization, think tank, and publisher dedicated to being a resource for its members, government officials, business executives, journalists, educators and students, civic and religious leaders, and other interested citizens in order to help them better understand the world and the foreign policy choices facing the United States and other countries.

However, behind the scenes, according to former CFR president,  Winston Lord, the CFR runs the world: “The Trilateral Commission doesn’t run the world, the Council on Foreign Relations does that!”

Hard to believe?  Watch this short video in which Hillary Clinton admits that the CFR tells her what to do and how to think:

The late Carroll Quigley (Bill Clinton’s mentor), Professor of History at Georgetown University, member of the CFR, stated in his book, “Tragedy & Hope”:  “The CFR is the American Branch of a society which originated in England, and which believes that national boundaries should be obliterated, and a one-world rule established.”

Rear Admiral Chester Ward, a former member of the CFR for 16 years, warned the American people of the organization’s intentions: “The most powerful clique in these elitist groups have one objective in common — they want to bring about the surrender of the sovereingty of the national independence of the United States. A second clique of international members in the CFR comprises the Wall Street international bankers and their key agents. Primarily, they want the world banking monopoly from whatever power ends up in the control of global government.”

Dan Smoot, a former member of the FBI Headquarters staff in Washington, D.C., summarized the organization’s purpose as follows:  “The ultimate aim of the CFR is to create a one-world socialist system, and to make the U.S. an official part of it.”

According to Jack Newell, who wrote “Why a Bankrupt America”: “Its members have run, or are running, NBC and CBS, ‘The New York Times’, ‘The Washington Post’, ‘The Des Moines Register’, and many other important newspapers. The leaders of ‘Time’, ‘Newsweek’, ‘Fortune’, ‘Business Week’, and numerous other publications are CFR members. The organization’s members also dominate the academic world, top corporations, the huge tax-exempt foundations, labor unions, the military, and just about every segment of American life.”

“We are grateful to the Washington Post, the New York Times, Time magazine and other great publications whose directors have attended our meetings and respected the promises of discretion for almost forty years. It would have been impossible for us to develop our plan for the world if we had been subject to the bright lights of publicity during those years. But, the world is now more sophisticated and prepared to march towards a world-government. The supranational sovereignty of an intellectual elite and world bankers is surely preferable to the National autodetermination practiced in past centuries.” — David Rockefeller, CFR, in an address to a Trilateral Commission meeting in June of 1991

We Were Warned by Four American Presidents

The existence of a ruling power elite that controls the U.S. government behind the scenes has been attested to by many prominent American political figures, including four presidents.  Consider the following quotes:

“For we are opposed around the world by a monolithic and ruthless conspiracy that relies primarily on covert means for expanding its sphere of influence–on infiltration instead of invasion, on subversion instead of elections, on intimidation instead of free choice, on guerrillas by night instead of armies by day. It is a system which has conscripted vast human and material resources into the building of a tightly knit, highly efficient machine that combines military, diplomatic, intelligence, economic, scientific and political operations.  Its preparations are concealed, not published. Its mistakes are buried, not headlined. Its dissenters are silenced, not praised. No expenditure is questioned, no rumor is printed, no secret is revealed. It conducts the Cold War, in short, with a war-time discipline no democracy would ever hope or wish to match.” — John F Kennedy on April 27, 1961

“Behind the ostensible government sits enthroned an invisible government owing no allegiance and acknowledging no responsibility to the people.” — President Theodore Roosevelt

“The real truth of the matter is, as you and I know, that a financial element in the large centers has owned the government ever since the days of Andrew Jackson.” — President Franklin Roosevelt

“The real rulers in Washington are invisible and exercise power from behind the scenes.” — Felix Frankfurter, Justice of the Supreme Court (1939-1962)

“Outwardly we have a Constitutional government. We have operating within our government and political system, another body representing another form of government, a bureaucratic elite which believes our Constitution is outmoded.” — Senator William Jenner , 1954

Are We Ever Told the Truth?

“We’ll know our disinformation program is complete when everything the American public believes is false.“  — William Casey, CFR member and former CIA Director (from first staff meeting in 1981)

“Look, if you think any American official is going to tell you the truth, then you’re stupid. Did you hear that?  Stupid!“– Arthur Sylvester, Assistant Secretary of Defense for Public Affairs, 1965

What CFR Members Think of Us

“To put it in a terminology that harkens back to the more brutal age of ancient empires, the three grand imperatives of imperial geostrategy are to prevent collusion and maintain security dependence among the vassals, to keep tributaries pliant and protected, and to keep the barbarians from coming together.” – Zbigniew Brzezinski, The Grand Chessboard, (1997)

“These new and old major powers face still yet another novel reality – in some respects, unprecedented.  And it is that while the lethality, the lethality, of their power is greater than ever, their capacity to impose control over the politically awakened masses of the world is at a historic low. To put it rather bluntly, and I was flattered that the British foreign secretary repeated this, as follows: namely, in earlier times, it was easier to control a million people than physically to kill one million people; today, it is infinitely easier to kill a million people than to control a million people.” ~Zbigniew Brzezinski.

Hear Brzezinski speak the above quote for yourself.  This will send chills down your spine: