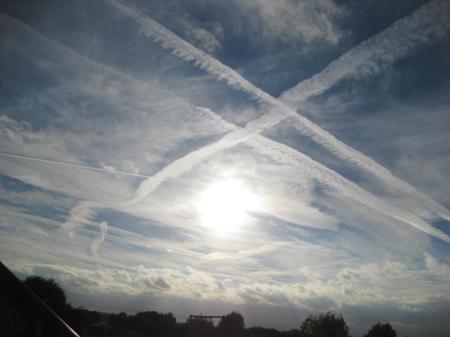 Share540
Tweet
+1
Share
Pin
540 Shares
“The ultimate solution is a multiplication of leverage by citizens to the point where it simply cannot be denied”. –Clifford Carnicom

The materials disbursed in stratospheric aerosol geoengineering operations contain a combination of ionizable metallic salts, filaments, gel-type materials, and crystals. These are the longstanding and deeply interrogated observations of independent environmental research scientist Clifford Carnicom given on a December 10 conference call organized by GlobalSkywatch.com director Russ Tanner. During the meeting, coincidentally held on International Human Rights Day, Carnicom asserted that because the system of responsible government has failed, the immediate collective efforts of citizens are necessary “to claim their rights upon this planet.”[1]

His remarks were made just three months after his presentation at the Consciousness Beyond Chemtrails conference held in Los Angeles last summer. In that talk, “Geoengineering and Bioengineering: The Unmistakable Link,” Carnicom upheld his research detecting such a correlation. “’Is there a direct relationship between the alteration of living systems (us) and ecosystems (the environment)?’” he asks. “My answer is unequivocally, ‘Yes.’”

Mr. Carnicom’s work began in 1999 when he noted clear changes in the skies overhead. He has since produced a large body of sound and meticulous yet accessible research reports examining the nature and contents of such aerosols, all of which are available at carnicominstitute.org. 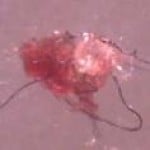 The implications of his observations—that virtually every breathing organism is an unwitting participant in a massive biological experiment of unknown purpose—have proven terrifying enough to prevent many individuals from even tentatively considering his investigations and hypotheses. “There’s a personal journey everyone has to take about the reality of this,” Carnicom told call participants.

The most well-known manifestation of such nano-biologicals is the oft-misunderstood Morgellons ailment, an especially unusual and disturbing condition marked by painful dermal lesions through which such nano-fibers protrude. Tammy, a participant on the conference call suffering from Morgellons who became intimately informed about the sickness because of Carnicom’s work, asked if the broader population was also susceptible.

“I want to be as accurate as possible if I’m going to make a public declaration,” Carnicom stated. “The diplomatic way of saying this is that the evidence indicates that the general population is subject to the very same symptoms that Tammy is experiencing.”

How can one determine whether they are an unknowing subject of bioengineering? In 2008 Carnicom presented a simple technique developed by naturopathic physician Gwen Scott for the lay population to detect the presence of nano-fibers in their bodies. A mouthwash consisting of two teaspoons dry red wine and one teaspoon hydrogen peroxide vigorously applied for five minutes yielded observable clumps of fibrous strands comprised of an “encasing filament, sub-micron filament network, Chlamydia-like structures and the ‘hybrid form’” in fourteen subjects tested from diverse geographic locations across the US.

According to Carnicom such organisms “have now been discovered repeatedly across all major body systems and functions, including skin, blood, hair, saliva, dental(gum), digestive, ear and urinary samples.” [2]

Shortly after Carnicom began his research in the late 1990s major government and corporate entities with probable ties to this program made numerous repeated visits to the researcher’s website. Their interest suggests the threat Carnicom’s investigations posed in making such programs publicly known. IP addresses employed to peruse the site included offices as high as the Secretary of Defense and Air Force Headquarters, as well as over one dozen US Air Force bases, several US-based research laboratories, the Environmental Protection Agency (EPA), and the corporate offices of Lockheed, Boeing, Merck Pharmaceuticals, Arco Chemical, Kaiser Permanente, and the Mayo Clinic.[3]

Yet such curiosity fails to permeate the US agencies entrusted with the preservation of the environment and public health. Even though Carnicom is producing especially valuable research and has persistently called for regulatory intervention on the public’s behalf, the EPA and Centers for Disease Control and Prevention have been wholly dismissive of his findings and requests to actively enforce existing laws intended to protect the environment and public health. Nor have these agencies presented comparable evidence of their own refuting Carnicom’s findings and justifying their failure to act upon the standards under which they are purportedly governed.

For example, when Carnicom sent the EPA samples of fibrous pollutants for analysis several years ago the agency responded, “It is not our policy to identify unsolicited materials.” Carnicom characterized this key instance of bureaucratic denial as “a powerhouse of innuendo and obfuscation that has never been resolved. When you have a specific mission statement you do not adopt a policy that suits the person in office at the time.”

Along these lines in early 2012 the CDC announced the findings of its inquiry into Morgellons by stating that it could not identify an origin for the fibers and concluding that individuals demonstrably suffering from the condition were “delusional.” Environmental writer Randy Ananda commented that the obfuscation merely provided cover for the Department of Defense’s ongoing experimentation.[4]

The US Government and Human Experimentation

The US government and military have long possessed the capacity and demonstrated the will to violate the Nuremberg Code by using nerve, biological, and radiological agents on unsuspecting human subjects.The fluoridation of public water supplies and above-ground nuclear testing are but a few dramatic and irrefutable examples. The premeditated will to do so further resounds in the government’s overt sponsorship of over 700 Nazi scientists under Operation Paperclip. The fruits of their research included the noxious and debilitating mycoplasma stealth pathogen derived from the brucellosis bacterium that likely infects many today.

Further, the US military’s ability to administer lethal substances on civilian populations is well established. In 1969 testimony before the House Defense Appropriations Committee the Pentagon’s Deputy Director of Research and Technology Dr. Donald MacArthur explained how “[l]ethal chemicals … about ten times more potent than the most toxic of World War I gases” could be released “in artillery shells or bombs, rockets, or you can deliver them from spray tanks … [T]o attack a complete city of many millions of people,” MacArthur continued, “let’s say a densely populated city like New York—it would take 300 to 400 tons efficiently dispersed to immobilize the city.”[5]

There are likewise numerous historical instances of the US government using citizens as nothing short of guinea pigs. For example, in 1994 Freedom of Information Act requests forced the US Army to divulge how in the mid-1950s it sprayed hundreds of pounds of zinc cadmium sulfide into a densely populated and predominantly black district of St. Louis.

“I’m wondering if it got into our system,” said former resident Lisa Martino-Taylor, who lost four brothers and sisters to cancer early in their lives and suspects that radioactive particulates were mixed with the metallic substance. “When I learned about the testing, I thought ‘Oh my god. If they did that, there’s no telling what else they’re hiding.’”

The Army claimed that it only used blowers atop buildings to distribute the toxins. Yet a resident of another targeted neighborhood in St. Louis, Mary Helen Brindell,

recalled a summer day playing baseball with other kids in the street when a squadron of green Army planes flew close to the ground and dropped a powdery substance. She went inside, washed it off her face and arms, and then went back out to play. Over the years Brindell has battled four types of cancer—breast, thyroid, skin and uterine. “I feel betrayed,” said Brindell, who is white. “We pointed our finger during the Holocaust, and we do something like this?[6]

With such instances in mind the question is no longer, “Would the government partake in such human experimentation that may be injurious or fatal to its own population?” It is instead, “What safeguards and systems of accountability exist that would prevent the government from using members of the general population as unwitting lab animals?” The bureaucratic shenanigans of the EPA and CDC and the abandonment of their respective mandates to protect the environment and public health make the answer more than obvious.

“Our World Has Been Transformed”

In a 2011 paper Carnicom demonstrates how the filament samples likely originating from aerial spraying are identical to those found in Morgellons’ victims. “The fact that this traces itself to a repeatedly occurring environmental sample represents, in my opinion, the worst crime in human history.”[7]

Indeed, such observations suggest how the unspeakable horrors of Dacchau and Auschwitz are not the stuff of a seemingly distant historical past. As Carnicom’s deep research suggests, such profound crimes have been resurrected in the skies above and worlds within. “Our biology is being negatively affected by this intrusion into our lives,” Carnicom warns, “whether it will be fifteen or fifty years.”

Drawing a conclusion to his remarks on the GlobalSkywatch call, Mr. Carnicom responded to an attendee articulating frustrations shared by many conscious and concerned citizens. “How do we get this to stop? How do we get the government to respond to us?”

“I will be inadequate in terms of what I can offer,” Carnicom began.

To start answering this question I have to extend it to each one of you. Do you remember the old JFK [challenge]? I know it’s a cliché but clichés sometimes have some meaning. “Ask not what your country can do for you. Ask what you can do for your country.” Just skip the patriotic aspect of it and ask yourself what you’re going to do.The first thing that I would do is extend to every one of us the necessity for involvement and using your talents.

The second thing is that our world has been transformed now. Normal things don’t work. Frustration does not eliminate the call for duty that exists upon each of us … This is more a level of consciousness and awareness; of planting a seed, but the level that is going to be required is so different in this world than anything that has been imagined in terms of the demand for the right to a healthful and peaceful existence on this planet. It’s going to have to happen at a level that we’re not thinking of right now because the normal processes are not working. The Million Man March doesn’t cut it. I wish that I could answer simply what it is going to be. But it is going to [require] a shift in consciousness and awareness that is so forthright and direct that all of the games and manipulations–and the business of three, four, six companies controlling the media–no longer works and no longer applies. I don’t want for it to be decades in our future.

[5] United States House of Representatives, Ninety-First Congress, Hearings Before a Subcommittee of the Committee on Appropriations, First Session. In Jesse Ventura with Dick Russell, 63 Documents the Government Doesn’t Want You to Read, New York: SkyHorse Publishing, 2011, 65-66.