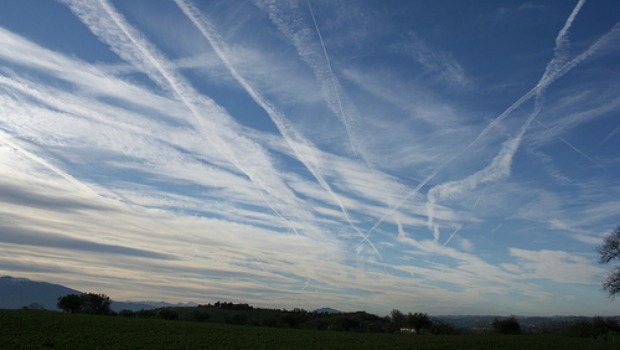 “In the last ten years, respiratory disease in the US has moved from 8th to 3rd highest cause of death. Asthma rates have more than doubled in the western world and Alzheimer’s’ disease, a condition that is caused by aluminum poisoning, has also skyrocketed. “

If we don’t organize to stop this scourge, we deserve what we get.

There has been an increasing awareness of chemtrails in recent years. Protests have been organized, movies have been released and whistle blowers have come forward. Most significantly, former Los Angeles FBI chief Ted Gunderson made a video denouncing chemtrails shortly before his death in 2011.

The heavy spraying began in NATO countries in the late 90s, but today chemtrails are being recorded pretty much everywhere, from Russia to Brazil, South Korea to Cuba. This is a program of extraordinary scope and importance. However, while we know a chemtrail program exists, there is very little hard information on how it functions and what its goals are.

I have been researching chemtrails and, while I don’t yet have the full picture, I present this information will plug a few holes.

Most politicians are as oblivious as we are. AC Griffin, a former CIA and NSA operative, says: ‘The monies that go into CIA projects don’t necessarily come from congressional appropriations. The congress as a whole is completely oblivious to the aerosol program.  They are afraid to ask.’

People on the inside who oppose the program are punished. ‘One of the key people who designed the aerosol is now sitting in federal penitentiary. They still go to him to ask him questions.’

Griffin also revealed that former Clinton era Navy Chief  of Naval Operations, Jeremy Boorda, left, was murdered because he opposed the program. Boorda was found dead in 1996 with three shotgun wounds in his chest. The authorities were quick to claim he committed suicide, and the autopsy results were never released to the public.

Commercial airliners are involved in spraying. In the very beginning, the aerosols were sprayed solely by military planes, but now the program has been expanded and commercial airliners have been outfitted with aerosol units controlled by computers and satellites. Photos provide evidence of this, like this Lufthansa jet flying over the US (below,left).

In the airline industry, the operation is known as Project Cloverfield. In 2000, a high level executive at an American airline revealed his office  was visited by two men from an unnamed government agency:

‘They told us that the government was going to pay our airline, along with others, to release special chemicals from commercial aircraft. When asked what the chemicals were and why we were going to spray them, they told us that information was given on a need-to-know basis and we weren’t cleared for it…We were made to sign non-disclosure forms that basically stated that we would go to prison if we told anyone what we knew.’

Delivery by commercial aircraft raises the possibility that many countries have not given consent to being sprayed, and may be unaware it’s even happening.

Weather manipulation is a daily occurrence – Chemtrails are used in conjunction with HAARP for geo-engineering (the technical term for weather control). Much is written about the ability to create disasters like earthquakes and tsunamis against an enemy, but we don’t realize that weather patterns are manipulated all the time. Scott Stevens was a TV weatherman in the US but quit his job upon realizing that this was happening on a nigh daily basis.

Global warming is the cover story for the increasingly severe and bizarre weather worldwide.

Geo-engineering is used to force GMO crops on the world. Manufactured floods and droughts damage harvests and put farmers out of business.

Monsanto has the patent for GMO seeds that are drought and flood resistant, as well as resistant to the poisonous effects of aluminum, one of the key metals in chemtrails.  Any farmer who refuses to grow GMO crops will not be able to guarantee a good harvest and will go out of business.

Even worse, Monsanto’s end game is to force what are termed ‘Terminator’ seeds on farmers worldwide. These crops don’t produce seeds, meaning the farmer has to buy new seeds from Monsanto every planting season!

Weather Derivatives are chemtrail insurance. – You may wonder how the big players protect their interests from weather warfare. Say, how does George Soros, who owns thousands of acres of farmland in America, protect his profits from engineered drought?

Companies use financial instruments to hedge against risk of adverse weather conditions. They first appeared in the late-nineties, the same time the heavy spraying started! Michael Agne, a trader at the Chicago Mercantile Exchange, explains how they work:

Chemtrails are a ‘soft kill’ operation – Soft kill attacks primarily aim to disable and weaken the enemy, not kill him. As Dr. Len Horowitz has explained, wars are an inefficient way to lower population numbers because they destroy infrastructure. The preferable scenario is to create a sick population dependent on the military-medical-industrial complex for their health. In this way, you have population control, make vast fortunes doing it and keep the infrastructure intact.

Chemtrails are a Multi-Pronged Attack

Firstly, the metallic salts used in the aerosols are highly toxic and require our bodies to waste tremendous amounts of energy removing them. Millions of people cannot do it. In the last ten years, respiratory disease in the US has moved from 8th to 3rd highest cause of death. Asthma rates have more than doubled in the western world and Alzheimer’s’ disease, a condition that is caused by aluminum poisoning, has also skyrocketed.

The second thing is the release of diseases. A high placed military insider claims that bacteria and viruses are freeze-dried and placed on fine filaments for release. The metals released along with the diseases heat up from the sun, creating a perfect environment for the bacteria and viruses to thrive in the air supply.

Third, chemtrails contain nano technological weapons. Surprisingly, this fact has remained so low-key in the alternative media. It is well proven by researchers like Dr. Hildegarde Staninger and former government scientist Clifford Carnicom. 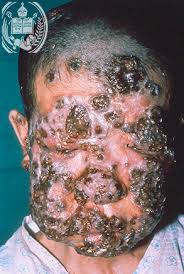 The nanotech consists of genetically modified organisms that are basically bio-robots. When we inhale them, they take up residence in our bodies and live as parasites. When the infestation becomes advanced, the individual develops what is termed Morgellons disease. He is so weak that he can barely do anything and suffers an array of bizarre and ghastly symptoms: scabs that don’t heal, hair that falls out and is replaced by pseudo hair and unceasing crawling sensations beneath the skin.

Morgellons is a new condition that has appeared in the last decade – the same time the heavy spraying kicked in! There are an estimated 60,000+ sufferers in the US alone, and their symptoms are chronicled by the Morgellons Research Foundation.

There is evidence that the nanotechnology in the aerosols creates genetically modified red blood cells. Clifford Carnicom has found these cells in the atmosphere and in the blood samples of most people he tests. They are quite unlike normal red blood cells; they can grow outside of the body in a petri dish, survive high temperatures and withstand being doused in acid. Clearly, this is highly sophisticated bio warfare!

We don’t know for sure what purpose they serve, but the answer may have been provided by Ray Kurtwell, one of the biggest names in the transhumanism movement. In a recent speech he said: ‘In the next 25 years we will have bloodcell -sized devices that go inside your body and keep you healthy from inside, that go in your brain and interact with your biological neurons and merge with our biological intelligence.’

When an establishment scientist tells us with certainty that something will exist, assume that it already does. There is a chance that the ‘blood-cell sized devices’ that Kurtwell mentioned are the weaponized red blood cells being discovered, and that mind alteration is currently underway.

How do the perpetrators protect themselves? The Illuminati never launch an attack without making sure they’re protected first. For instance, President Bush took an anthrax vaccine two weeks before the anthrax attacks in 2001. They may drink a solution once a day that removes the toxins from their bloodstream, or have a chip put in their arm that acts like a tiny dialysis machine.

Many involved in the operation probably don’t know the true agenda. Dr. Bill Deagle, was a doctor at Buckley air force base and claims to have treated the pilots who were spraying the aerosols, ‘95% of them told me they were up there spraying to reflect the sun to stop global warming, so most of them are dumb enough to believe that garbage.’

The Illuminati are vandalizing the skies, as visibly as a graffiti artist spraying a wall, and yet most of us remain oblivious. Like little else, chemtrails bring home just how desperate our predicament is.

Despite this, I think anti-chemtrail activism has tremendous potential. The existence of the operation is easy to prove and we have the testimony of many whistle blowers. The protest movement can continue to generate momentum because chemtrails will persist for decades to come.
—

David Richards, 24, teaches English in Mongolia. He is a regular contributor.
—

Makow Comment- Citizens should form committees in every city to monitor and photograph chemtrail activity; educate the public and spread awareness; and to petition politicians and media. The Illuminati positively hate spontaneous political activity they don’t initiate and control. This is a great way to increase consciousness about the NWO conspiracy.