Chemtrails? ‘Mysterious Fibers’ Fall from the Sky in France 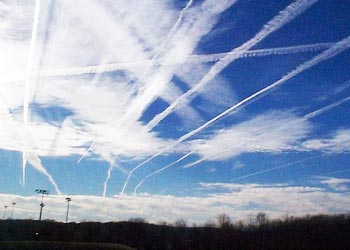 French English-language newspaper The Connexion is reporting that mysterious fibres have dropped from the sky over Drôme and Ardèche in Southern France, leaving residents puzzled while others point to the chemtrail phenomenon:

Reports of the fibres were first raised on Thursday, but no one has yet been able to identify what they are – giving rise to theories that they are the by-product of plane exhausts.

Some website[sic] are already speculating that the fibres are proof behind a conspiracy theory that “chemtrail”, contrails from planes that take a long time to disperse, are deliberately injecting chemicals into the atmosphere to spread disease and kill of[sic] the sick and infirm.

Many continue to debate whether or not weather modification (or worse) in the form of chemtrails — white lines that at first appear to be jet contrails sprayed across the sky, but instead of readily fading away behind the jets, these trails fan out, stay in the air and sink into a murk on the horizon — exists.

While talking about the chemtrail phenomenon may quickly earn someone a ‘conspiracy theorist’ label (a seemingly automatic, conditioned response that dissuades anyone from critical analysis or doing their own research), in reality scientists and climate change advocates have been openly calling for the spraying of aerosols into the atmosphere to advert supposed man-made climate crises for some time now.

Articles such as, “Geoengineering Could Turn Skies White” published last summer in Scientific American blatantly discuss a Carnegie Institute study on geoengineering via chemtrails as if it is already occurring as we speak:

The white haze that hangs over many major cities could become a familiar sight everywhere if the world decides to try geoengineering to create a cooler planet. [emphasis added]

A Michigan Congressman is even promising to hold a hearing on chemtrails.

Morgellons is a disease specifically involving fibers many have tied to the chemtrail phenomenon. According to Wikipedia, Morgellons is “where sufferers have the delusional belief that they are infested with parasites, whereas in reality no such parasites are present,” yet “Sufferers may exhibit a range of cutaneous symptoms such as…unusual fibers in the skin”. If someone is delusional, how can they actually exhibit fibers growing out of their skin? (On an aside, this must be why most college professors won’t allow students to cite Wikipedia as a trusted source on anything).

In reality, multiple scientific papers (see here and here for just two examples) have already linked Morgellons — and the very real fibers it causes to grow out of lesions in people’s skin — to a spyrochetal infection, but the official etiology on Mogellons is still unknown. Moregellons has also been associated in the literature with Lyme’s Disease — a tick-borne illness tied to World War II and U.S. Operation Paperclip in alarming ways that are outside the scope of this article to discuss, but definitely worth further research.

According to writer Michael Winter, “The composition of chemtrails is surprisingly simple, even if the chain of events that said composition initiates is not. Chemtrails are comprised of three basic ingredients: powdered aluminum, barium salts and a synthetic carrier substance called polymer fibers.” [emphasis added] Winter goes on to say, “When you look into the sky and see chemtrails, know at least two things: One – they are composed of ingredients deadly to humans, and Two – they are in the sky. Remember the old song Spinning Wheel? “What comes up…must come down…”

The question is, are these deadly fibers currently falling all over residents in Southern France?

Eerily, the article didn’t just mention that people are speculating whether or not these fibers are a result of chemtrails, but it specifically referenced theories that chemtrails are a means of depopulation.

Even though these strange fibers are falling from the sky, something that presumably doesn’t happen every day in France, French authorities went on to comment that they will not be sending them in for any testing either way, so once again, plausible deniability will be allowed to rule the day on chemtrails.

3 Responses to Chemtrails? ‘Mysterious Fibers’ Fall from the Sky in France