Chemtrails: The Conspiracy Theory That Never Was 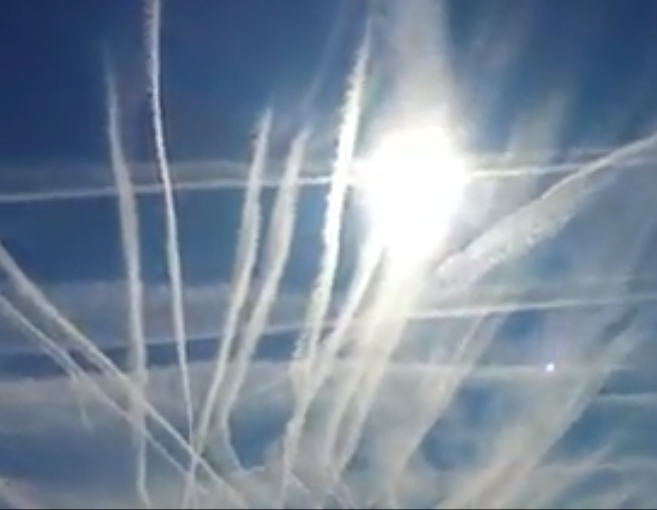 The geoengineering program has been going on for so long, is so well funded and was so carefully applied at the start that nobody noticed. But that was the intention. And when you have limitless amounts of money and a whole chain of command at your disposal with a ‘need to know’ clearance attached, not even the sky is the limit. Now they know they can get away with it they have become almost reckless with the trails. They know that the general population are so absorbed with the app’s on their latest iphone that they hardly have time to look up.

When I talk about this ‘out of the box’ stuff with people, I get asked questions that begin with: ‘why would they? How could they? As if we were talking about some kindly, gentle old grandma – and there is the problem. We live in an age of takeaway food, instant coffee and television ‘programs’ but what comes with that, is an armchair reality. We are so used to having people pre-prepare our lives that we have lost the ability to apply reason and go seek the truth.

So I cannot understand this unshakable trust that people have in an unknown quantity of strangers who hold the questionable and loosely described position of ‘the powers that be.’ Especially as most of the time they operate in complete secrecy and so regularly demonstrate that they do not have our best interests at heart.

Corruption is evident throughout government, police, media, banking and corporations alike. When the need arises they rally to protect each other and close ranks to hide the evidence behind an impenetrable veil of secrecy. People’s protests are ignored, promises are broken, bonuses paid, expenses claimed and life at the top continues unabated.

Meanwhile, ordinary people are losing their jobs, their homes and their privacy. Thanks to CCTV we are watched in the street, in the shop, the garage, library, car park, school, hospital etc, etc – cameras can even be found in some school changing rooms. This is not a healthy state of affairs.

At home our on-line activity is followed and our personal details and preferences are shared among people we don’t even know. Some councils are encouraging us to spy on each other (as if the state wasn’t doing that well enough already) and then tell tales, something that responsible parents have always actively discouraged.

We have endured generations of being controlled. We have accepted authority for the most part without question. We have followed the rules, often against our better judgement, while the rule makers have consistently broken the rules themselves – and all the while, the gap between the haves and have-nots grows exponentially yet still we trust that they will do the right thing – eventually.

We should be asking who is benefiting from all this control? And who is controlling the controllers? – As they are clearly unable to control themselves most of the time.

What we are in real danger of losing for good, are all the most valuable and treasured gifts we inherited as human beings when we were born: Freedom, independence and privacy. The right to make choices for ourselves and our families – especially our children. The right to own our own property, grow our own food and have access to fresh water. It seems ridiculous to have to be saying it but I will add to this list the right to a safe, unpolluted, natural environment and a clean sky.

As sentient human beings we have always had an unbreakable connection to nature. But we are now living at a time when there is more outside interference in our natural lives than there has ever been. Food, climate and living standards are all being ‘engineered’ to some degree – and in a way, we asked for it.

We are constantly involved in wars with people we don’t know in countries that are as far from us in culture as they are in distance. But news programmes have taught us to accept what we are told and to believe what we are shown. Yet we live our lives to a very great degree within mass media where fact and fiction are almost indistinguishable from each other.

The only way most people measure truth these days is by the amount of faith they have in who is telling the story. Often their truth comes from just one newspaper or one television news programme that they follow without question. Despite this narrow conduit of knowledge they will defend that truth to the bitter end against all your hard-earned research on the internet and suddenly you are being described by them to others as a conspiracy theorist.

And so to chemtrails. We all know that the weather isn’t right, the sky is white or grey blue most of the time, there are droughts or floods and the trees are dying. The sunshine is lovely when we get it – but then it’s too hot. We all complain but it gets blamed on ‘global warming’ or ‘climate change’ and we’ve been persuaded to believe that it’s ‘all your fault’ – it isn’t!

Geoengineering has been discussed for years as a possible solution for ‘correcting’ the world’s weather. But all the while that discussions were taking place amongst recognized establishment scientists and government advisors it was already in place and in full swing, just adding to the climate confusion. They were having their discussions ‘in the dark’ so to speak anyway, because it had already been sanctioned and financed by people at a much higher level with the necessary connections to the military.

So, if this is true, what are their objectives?

Here are my conclusions based on available evidence and the work of leading researchers at the sharp end.

A. To weaponize  the atmosphere for HAARP/Scalar technology (completed).

The particulates in aerosols which are now permanently present in our atmosphere due to continual replenishment by aircraft, have allowed the atmosphere to accept a current. The atmosphere is naturally non-conductive  this means in effect that it has now been weaponized.

B. To dominate all agriculture/seed production using weather as a weapon

By heating the ionosphere using HAARP, the jet stream can be moved. Weather systems can be manipulated denying chosen areas their natural rainfall. Storms can be propagated or snowfall created – in fact almost any kind of weather event can be manufactured for political or financial advantage.

C. To ultimately have control of the world’s population using A and B above (Agenda 21).

But it appears that there is also a further and more sinister objective.

Although information through normal channels is limited, it has nevertheless been clearly established by researchers such as Clifford Carnicom, Sofia Smallstorm and others, that part of the aerosol programme is to facilitate the implementation of a trans-humanist agenda without our consent. Therefore we must add:

D. The combining of the natural human system with nano technology.

This involves the changing of our blood, tissue and DNA – and to some extent the evidence to date indicates that this has already been achieved.

Morgellons disease has now been shown to be a direct consequence of a body’s intolerance to the microscopic fibres and nano technology found in aerosol chemtrails that we are all breathing. There are now many thousands of sufferers worldwide. Visit www.morgellonsexposed.com

Clifford Carnicom's site contains a wealth of meticulous investigation into all aspects of the aerosol operations and its consequences for human health including the Morgellons catastrophe. He is making it freely available for the good of humanity. You can view and download all his scientific research to date. www.carnicominstitute.org

Dane Wigington’s site www.geoengineeringwatch.org has the best coverage you will find in one place – anywhere on the internet. I doubt there is anyone with a more comprehensive knowledge on the subject. Like Clifford Carnicom Dane has been forced to give up a ‘normal’ life in the pursuit of truth and exposure of this massive crime.

It has become clear to me over the years that there is a common thread that connects all ‘truthers’ as we might describe ourselves. That is that we are all conscience driven. You will never enlighten anyone about chemtrails, corruption or anything else if all they care about is what there might be ‘in it’ for them – or they don’t care about tomorrow. Most people I know are like this to some degree and sadly, I have lost some friends along the way because they didn’t understand and I wasn’t prepared to do all the compromising. Tragically, as ecosystems collapse and species’ become extinct, the weight of stubborn, often arrogant, deniers of geoengineering hinders its cessation.

In sumary, it is my belief that the aerosol program is a joint operation shared by several different groups who’s objectives overlap and who have been forced to work together bound by the need for absolute secrecy. It’s clear that a lot of politicians, scientists and doctors are still in the dark, because they get their information from official sources above them who’ve been told that geoengineering is still just ‘an option’ should we need it.

As for human health, the incidence of Alzheimer’s, Autism, Dementia and many other serious illnesses such as Morgellons has increased dramatically since the spraying started in earnest in the 1990’s. It doesn’t take a genius to understand why the ingredients of aerosols sprayed around the clock in such huge quantities are poisonous to very many life systems including our own.

As hard as it may be to accept, the perpetrators of this agenda know this. It is logical to assume, in that case, that as they have access to such incredibly advanced technology, they must also have the means of protecting themselves. Remember, Agenda 21 is all about massively reducing the world's population so it may be enjoyed by the surviving elite.

The truth about the geoengineering agenda, like so many other truly important issues of our time, will not be found in your TV set. If you ‘Google’ chemtrails you won’t necessarily get the truth – but you will get over 6 million results. That’s a hell of a conspiracy theory.

20 Responses to Chemtrails: The Conspiracy Theory That Never Was