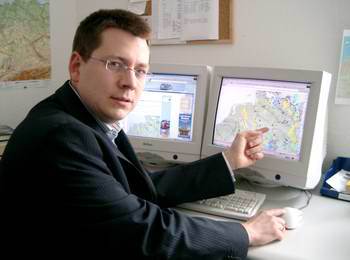 Johannes Remmel is Minister for Climate Protection, Environment, Agriculture, Conservation and Consumer Affairs of North Rhine-Westphalia. He is also parliamentary manager of the Green Party of the North Rhine-Westphalia state parliament in which he has been a member since June 1995.  As a member of the Green Party in the state parliament, Mr. Remmel has served as the party’s tourism and financial affairs spokesperson, and has served as the party’s environmental spokesperson since 1997.  Source

The followng is a translation of the spoken word from German to English from the 2007 TV News Video  Below:

” The Federal army is manipulating the meteorological maps.  We can say with 97% certainty that we have on our hands “chemical trails” comprised of fine dust containing polymers and metals used to disrupt radar signals. This is their main purpose but I was surprised that this artificial cloud was so wide-spread.  The radar images are stunning considering the needed tons of dispersed elements, although the Army claims that only small amounts of material were propagated.  The military heads claim that the substances used are not harmful . “

Narrator:  After the first discovery Karsten Brandt filed a legal challenge against responsible parties involved in secret weather manipulation based on his careful verifications and data gathered by radar through which he documented every anomalous cloud formation.

Note: We are researching the aftermath of this 2007 News report, particularly the response to Brandt’s alleged legal challenge. It’s quite apparent that aerosol spraying has continued over Germany without interruption.