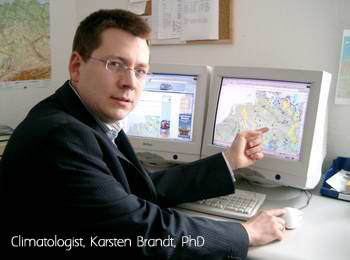 Karsten Brandt was born in Bonn, Germany in 1973 and currently holds a doctorate in the field of Climatology

Johannes Remmel is Minister for Climate Protection, Environment, Agriculture, Conservation and Consumer Affairs of North Rhine-Westphalia. He is also parliamentary manager of the Green Party of the North Rhine-Westphalia state parliament in which he has been a member since June 1995.  As a member of the Green Party in the state parliament, Mr. Remmel has served as the party’s tourism and financial affairs spokesperson, and has served as the party’s environmental spokesperson since 1997.

The following is a translation of the spoken word from German to English from the 2007 TV News Video  Below:

” The Federal army is manipulating the meteorological maps.  We can say with 97% certainty that we have on our hands “chemical trails” comprised of fine dust containing polymers and metals used to disrupt radar signals. This is their main purpose but I was surprised that this artificial cloud was so wide-spread.  The radar images are stunning considering the needed tons of dispersed elements, although the Army claims that only small amounts of material were propagated.  The military heads claim that the substances used are not harmful.“

Narrator:  After the first discovery Karsten Brandt filed a legal challenge against responsible parties involved in secret weather manipulation based on his careful verifications and data gathered by radar through which he documented every anomalous cloud formation.
Source—>Chemtrails Planet

A TV news report from Germany confirmed that the German Military is manipulating the climate in Germany. As a result scientists have filed a lawsuit against the government for climate manipulation.

The video concludes, “We can state with a 97% certainty that we have on our hands chemical trails (chemtrails) comprised by fine dust containing polymers and metals, used to disrupt radar signals.”

The purpose of chemtrails, which are well documented over the United State and other parts of the world, according to researchers, is to manipulate the weather. Karsten Brandt, German meteorologist states, “The Federal Army is Manipulating the Meteorological maps.”

The disruption of radar signals is the main purpose theorizes Mr. Brandt in the interview. “I was surprised that this artificial cloud was so wide-spread. The radar images are stunning considering the needed tons of dispersed elements – although, the federal army claims that only small amounts of material were propagated. The military heads claim that the substances used are not harmful.”

In Germany, weather manipulation is prohibited, and I would likewise believe that it is prohibited in the U.S. as well.

Since Chemtrails are so widespread, I would rule out the idea that this is just military performing operations to disrupt radar signals as part of some sort of drill.

The forefront of these operations in the United States appears to be the US Navy, as detailed in “Death in the Air: Globalism, Terrorism & Toxic Warfare,” by Dr. Len Horowitz. Many government watchdogs claim global depopulation, the targeted reduction of the world’s population by two-thirds, is secretly the reason behind chemtrail spraying.

For a while I was confused between chemtrails, and contrails. Contrails are the exhaust of an air craft, it leaves a trail in the sky and the trail rapidly dissipates. With chemtrails, they initially look identical to contrails, but rather than the trail dissipating, the trail expands and then starts to look like a cloud. Over the Silicon Valley where I live, I daily witness these chemtrails starting and stopping from airplanes. In other words, the plane has control over the chemicals it is releasing. Also, I have noticed on some days the area is filled with a gray hazy muck, and the mountains almost disappear. This is highly unusual especially when just one day before, the mountains were totally clear.

Part of the undercurrents, at least in the United States, is the concept being marketing through radio, television and schools, that the earth is overpopulated. The idea of overpopulation, as the cause of our problems, was something that I had believed in for a time.

I believed in that idea until I realized the abundance of nature. Just seeing the amount of food produced by one healthy tree, and the millions of acres of unused land in central California, helped me understand Nature’s abundance.

The creator did not put humans on earth to suffer, to starve and to die. The creator of life gave us vast resources from which to be healthy. Humans are grossly misusing earth’s delicate resources, and thus we have created an experience of lack and deprivation. The lack we experience is not natural, but a reflection of our disconnection from the source of life.

Every action, thought, and feeling has a cause and an effect. Evil never will win, it cannot. But we all need to work together to bring more awareness to the dreaded reality – that our government seems bent on making this planet a military war zone.

I have faith that evil won’t win this time.