Connecting the dots between HAARP, CHEMtrails and our water. 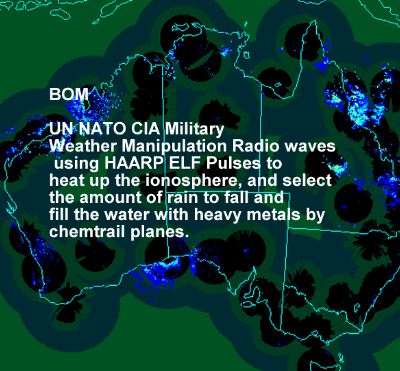 If you regard this as the most serious threat to Australian way of life and our freedom – Join the new party- Australian Sovereignty Party – Urgently. RAIN WATER POISONED with Heavy metals.

The National radar image shows our detective work to uncover two of the military bases likely to be breaking into the Australia Bureau of Meteorology’s National radar system and which we are to assume, as BOM have no knowledge of what is causing these effects, must be classified. The question now remains, is this part of the HAARP global network and what is its function? And if the Australian Government’s own Bureau didn’t know about it then who did and who is in charge? – “And is the Military doing these acts of weather manipulation under a foreign power’s instruction?” Copyright: Australia Bureau of Meteorology LOOK AT THE CIRCLES OF HAARP ELF PULSES ON AUSTRALIA.

when you tell your Elected Member about this crime and he/she replies that you’re talking about a ‘CONSPIRACY” then ask “Are these satalite maps of Electro Magnetic HAARP activity and Chemtrail activity ‘conspiracy circles’?” Send this on to Birds Australia” CEO Graeme Hamilton and tell him; “The thousands of birds that DIED from heavy metals from Chemtrails are NOT REALLY DEAD because its all a ‘conspiracy’” haarp ELF and UHF radio beams with billion watts power .

Backed up with constant CHEMTRAILS Contaminating our air and our rainwater with heavy metals.. Take these facts to your local member urgently- We can assure you; It’s not a conspiracy. It’s not ‘noise’ or radar interference. and It’s not caused by our Government, but by the UN NWO Military forces without our consent and must be stopped before it totally destroys our wildlife. http://www.bom.gov.au/products/national_radar_sat.loop.shtml http://www.bom.gov.au/products/national_radar_sat.loop.shtml click -MORE INFO ON THIS SECRET H.A.A.R.P WEAPON BEING USED ON AUSTRALIA

THIS IS ONE REPORT COVERING 4 DIFFERENT WATER SAMPLEs
added figures to the lab report are which are not part of the Lab report ; green=safe level Red= over the safe level

the first results – ARSENIC: over the safe level – However, NO arsenic should be in rainwater from the sky –
Headaches, confusion, sleepiness, and convulsions – arsenic poisoning causes Vomiting, diarrhea, kidney,skin cancer, scrotal cancer, liver cancer – cancer of the lymphatic system, and lung cancer. and blood in the urine, severe cramping muscles, hair loss, stomach pain, and more convulsions. coma and death. – –
Remedy- If you suspect that you are being exposed to arsenic your diet include lots of sulfur. Sulfur can eliminate some of the arsenic from the body. onions, beans, legumes, and garlic. IF you accidentally ingests arsenic administer 5 charcoal tablets immediately. Take 5 more charcoal tablets 15 minutes later and again every fifteen minutes.

First test results – Manganese over safe level can, poison the human body if there is prolonged exposure. HOWEVER; Ask the question”? why so much ‘manganese’ from the rainwater in the sky- “well” Manganese was used for ‘dry cell batteries’ It holds electrical charge and is useful to distribute the “HAARP” Electro magnetic ELF pulses to spread throughout the atmosphere. WHY?” Because the HAARP weapon, WILL BE ‘not maybe’ but WIL BE used for mind control over the public, and the ‘UN NWO CFR TC and W/Bankers are strongly coercing UN Treaty members Governments to GIVE the public ‘Stimulus’ FREE money for ‘home ceiling’ FOIL insulations. Please realise; “any home with this foil in the ceiling will act as an excellent magnifying conductor to increase the HAARP ELF frequency for mind control of those people inside the home..

First test results BARIUM:- CAUSES
anxiety, irregular heartbeat, shortness of breath and weakness in the muscles. Chronic Fatigue Watery eyes, dry throat, prolonged exposure can cause paralysis and death.
First test results ZINC
Zinc is necessary – Too much zinc ingested begins to act as a poison in the liver, kidney and pancreas – and cause a wide range of neurological ailments

When the amount of zinc in the blood reaches more than the allowable limit (15mg/day), leads to Hypocupremia or depletion of Copper. When the amount of Copper goes below the required levels in the blood, Myelin, a chemical which covers the nerves as an insulating sheath is lost. This results in severe and irreparable damage to the nervous system and several neurological complications such as Wilson’s disease, Neuropathy, etc.

First test results Boron in Drinking-water Boron’s chemistry is complex and resembles that of silicon (Cotton & Wilkinson, 1988).
Boron is a relatively inert metalloid except when in contact with strong oxidizing agents.
Boron is not present in the atmosphere at significant levels (Sprague, 1972). Because borates exhibit low volatility, boron would not be expected to be present to a significant degree as a vapour in the atmosphere.
The natural borate content of groundwater and surface water is usually small -below 0.2, and 0.1 mg/litre, Drinking water generally , but for most of the world the range is judged to be between 0.1 and 0.3
mg/litre.
The contribution of boron intake from air is negligible.
Acute exposure Signs of acute toxicity in animals include depression, ataxia, convulsions, and death;
kidney degeneration and testicular and ovarian atrophy –

Wikipedia, – Testicular atrophy is a medical condition in which the male reproductive organs (the testes, which in humans are located in the scrotum) diminish in size and may be accompanied by loss of function. boric acid or borax in laboratory animals have demonstrated that the male reproductive tract is a consistent target of toxicity. Testicular lesions have been observed in rats, mice, and dogs – studies in dogs have attributed testicular atrophy after low exposure to a low 32 mg/kg bw/day for 90 days. This level is far lower than the LD50 of boric acid at 5.14 g/kg for oral dosages given to rats, and 5 to 20 g/kg has produced death in adult humans. – Premature ovarian failure appears to be an autoimmune disorder, Secondary causes of premature ovarian failure include chemotherapy, irradiation and posthysterectomy bilateral vascular compromise.
by wemustknow.koen
Read more: http://www.cleanairandwater.net/water-test-results.html