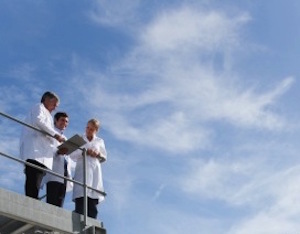 Many people hold David Suzuki in such high esteem, but is such respect truly warranted and deserved? Is Suzuki really an oracle of truth and wisdom, or is he a power structure owned public relations prop that will speak only as much truth as he is allowed to tell? Is Suzuki also being used by the power structure to publicly deny critical issues like climate engineering that they absolutely do not want the public to become aware of? In the 1 minute video below, Suzuki clearly denies the subject of climate engineering before walking away from the camera and those who simply wanted to ask him legitimate questions. There is absolutely no excuse for Suzuki's attempt to cloud the truth. There are only two possibilities regarding his behavior, he is either completely blind and ignorant to the natural world around him which he claims to be an expert on, or he is paid and/or pressured to lie about the dire climate engineering issue. If David Suzuki was truly committed to telling the truth in regard to the environment, and fighting for the common good, why would he lie about the geoengineering issue? Why would he lie about his corporate donations? The entire climate science community is built on a foundation of lies and cover-up. The state of the climate is not as bad as we are being told, it is exponentially worse. Global climate engineering is helping to fuel the fire overall. My most sincere gratitude to Irene Parousis and Christina Parousis for this video and for their exceptional efforts to expose David Suzuki's dishonesty and denial.
Dane Wigington
geoengineeringwatch.org