Did Chemtrails or HAARP Cause the Collapse of Earth’s Upper Atmosphere? 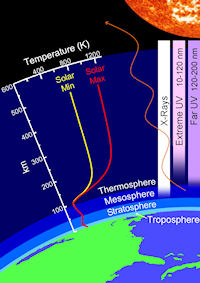 Puzzling Collapse of Earth’s Upper Atmosphere  NASA  SOURCE:
NASA-funded researchers are monitoring a big event in our planet’s atmosphere. High above Earth’s surface where the atmosphere meets space, a rarefied layer of gas called “the thermosphere” recently collapsed and now is rebounding again.

Layers of Earth’s upper atmosphere. Credit: John Emmert/NRL. [larger image] “This is the biggest contraction of the thermosphere in at least 43 years,” says John Emmert of the Naval Research Lab, lead author of a paper announcing the finding in the June 19th issue of the Geophysical Research Letters (GRL). “It’s a Space Age record.”

The collapse happened during the deep solar minimum of 2008-2009—a fact which comes as little surprise to researchers. The thermosphere always cools and contracts when solar activity is low. In this case, however, the magnitude of the collapse was two to three times greater than low solar activity could explain.