Dismantling The Lie Of “Contrails” 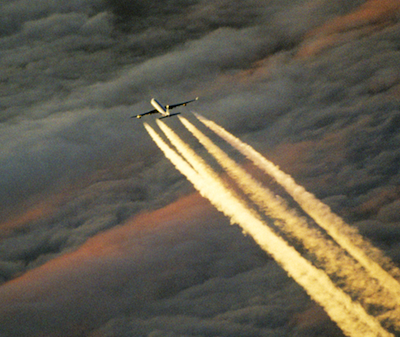 Those in power have done their absolute best to convince an all too gullible public that our constantly hazed out skies are just the result of "contrails", this is an absolute lie. All those that are funded by the power structure in one form or another tow the line on this lie as their paychecks and pensions depend on their participation. The list of those who are lying about the issue of "contrails" is incredibly long. It includes (but is not limited to) elected officials, government agencies (including state agencies), meteorologists, journalists and media sources, etc. With very few exceptions, we should not see ANYTHING behind the jets in our skies that are fitted with high bypass turbofan jet engines. High Bypass turbofan jet engines are fitted on ALL COMMERCIAL AIRCRAFT and ALL MILITARY TANKERS. High bypass jet engines are nearly incapable of producing a "condensation trail" except for the most extreme conditions and even then any visible trail should not be more than a few seconds at most. Even many actively engaged in the fight to expose and stop the ongoing climate engineering insanity do not yet understand this fact. Shorter bright trails are in most cases still SPRAYED HIGHLY TOXIC DISPERSIONS. Those who truly want to be effective in the battle to expose the geoengineering crimes should take the time to watch the video below, perhaps twice. More than any other issue, our collective futures depend on exposing and stopping the spraying. Do your part, get educated and become a more effective fighter in this most critical battle.
Dane Wigington
geoengineeringwatch.org

55 Responses to Dismantling The Lie Of “Contrails”