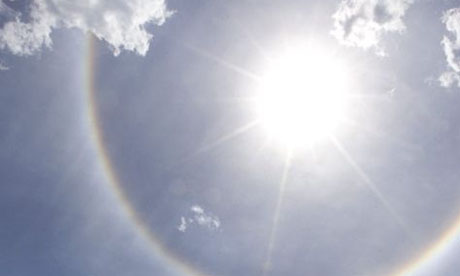 Share
Tweet
+1
Share
Pin
0 Shares
The likelihood that such technology could bring a safe, lasting, democratic and peaceful solution is minusculeGeo-engineering is increasingly considered a possible – even necessary, some argue – response to the climate crisis.

On the eve of climate talks that began last week, the UN’s climate chief, Christiana Figueres, told the Guardian: “We are putting ourselves in a scenario where we will have to develop more powerful technologies to capture emissions out of the atmosphere.”

Was Figueres painting a bleak picture to stress urgency of a new global deal on emissions cuts, or was she floating a trial balloon to gauge the political viability of geo-engineering the climate? Habitually lurking in the shadows as emergency “plan B”, the intentional modification of the global climate is now stepping out into the “solar radiation” of daylight.

Despite a de facto moratorium on climate-related geo-engineering adopted by the Parties to the UN Convention on Biological Diversity (CBD) in October 2010, geo-engineering is increasingly considered a possible – even necessary, some argue – response to the climate crisis. This was the tone set by the UK Royal Society’s 2009 report recommending more research. This tone was adopted by last year’s parliamentary committee hearings in London and House hearings in Washington – which heard from many of the same experts – and echoed in the report of the US government accountability office. The repeated calls for a coordinated research strategy have brought legitimacy to the issue of deliberate, global-scale climate interventions.

Just prior to the climate negotiations in Cancún last December, the IPCC announced that its fifth assessment report, due in 2014, would include a consideration of geo-engineering options. That work begins next week with an expert meeting in Lima, Peru. The scientific steering group behind the expert meeting includes geo-engineering researchers who have advocated increases in research funding and real-world experimentation, as well as scientists who have patents pending on geo-engineering technologies and other financial interests. We hope that their views will be balanced by other participants with a more critical perspective. Science is put at risk by self-interest.

It is in this context that several dozen organisations from around the world sent the IPCC an open letter on Monday (PDF), demanding a clear statement of its commitment to precaution and to the existing international moratorium on geo-engineering.

The letter’s signatories are civil society organisations with the view that the governments that got us into this mess and have delayed action on climate change for decades – and still refuse to take substantive action – have neither the intelligence nor integrity to be trusted with control of the world’s thermostat.

Manipulating climate in one place could have grave environmental, social and economic impacts on countries and peoples that had no say on the issue. The peoples of the global south know this already from their experience with anthropogenic climate change.

As the world watches the airline industries of Australia and New Zealand thrown into chaos by volcanic ash drifting from Chile nearly 10,000km away – not to mention the effects on human health and ecosystems closer to the eruption – it’s absurd that the IPCC would entertain the notion of doing something similar, on purpose. Blasting particles into the stratosphere could hurt Africa and Asia by disrupting precipitation as much as or even more than climate change itself.

Other proposed geo-engineering schemes place equally high on the absurdity scale: artificially altering the chemistry of our oceans, devising new carbon sinks in fragile ecosystems, hauling inland “biomass” to the nearest coast to give it (and its carbon) a burial at sea.

Figueres last week, Prof Lovejoy in the New York Times last Friday and Profs Mace and Redgwell in this paper Monday – all lament our dire situation and reluctantly conclude that we may have no choice but to go down geo-engineering’s risky road. When you look at current climate data and projections, their argument is almost compelling.

But why all this fatalism when we continue to support and subsidise high-emissions industrial agriculture and fail to support small-scale producers farming sustainably? When we continue to subsidize fossil fuel extraction, authorise new coal plants and fail to agree on the next commitment period for the Kyoto protocol? When we know consumption without end cannot be sustained? We also know biodiversity is essential for surviving climate change, yet we have failed to protect it.

There are many solutions to climate change that we have no choice but to adopt – proven, democratic and no-risk solutions. Why go down the road that is unproven, inequitable and risky? If we aren’t capable of the former, why would anyone believe we can pull off the latter?

The likelihood that geo-engineering could bring a safe, lasting, democratic and peaceful solution to the climate crisis is minuscule. The potential for unilateralism, private profiteering and disastrous, irreversible, unintended effects is great. Geo-engineering does not deserve serious consideration within climate policy circles. It should be banned.

• Pat Mooney is executive director at the ETC Group