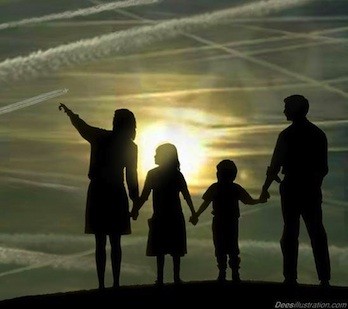 In response to the Guardian article, researchers David Keith and Jim Anderson have stated that article was incorrect: “We want to be absolutely clear that that we have no plans to implement a geoengineering field study to release “thousands of tonnes of sun-reflecting chemical particles into the atmosphere to artificially cool the planet, using a balloon flying 80,000 feet over Fort Sumner, New Mexico.”

The researchers also state, “Given the environmental threats to our planet and the growing pressure to seriously consider geo-engineering…” and refer the reader to a New York Times blog about their work (involving geo-engineering).

“Two Harvard professors said Tuesday they were developing a proposal for what would be a first-of-its-kind field experiment to test the risks and effectiveness of a geoengineering technology for intervening in the earth’s climate,” begins the New York Time blog.

Tuesday’s news about engineers spraying sun-reflecting chemical particles into the atmosphere in New Mexico skies to control the weather has outraged some scientists and human rights defenders who say this could be disastrous. Environmental modification is so disastrous, the Pentagon aims for more of it, including controlling the weather as part of its covert weaponry arsenal. Amid today’s global droughts, the hot debate has moved from “Is the climate changing?” to, “What is changing the climate?”

Using a balloon 80,000 feet over Fort Sumner, New Mexico, two Harvard engineers aim to test artificially changing the climate by cooling the planet with the controversial technology called environmental modification (ENMOD), an aim others have been engaging for years.

“Impacts include the potential for further damage to the ozone layer, and disruption of rainfall, particularly in tropical and subtropical regions – potentially threatening the food supplies of billions of people,” said Pat Mooney, executive director of Canadian-based technology watchdog ETC Group. “It will do nothing to decrease levels of greenhouse gases in the atmosphere or halt ocean acidification.”

Mooney, as reported by The Guardian Tuesday, emphasized, “[S]olar geoengineering is likely to increase the risk of climate-related international conflict – given that the modeling to date shows it poses greater risks to the global south.”

David Keith, one of the geoengineer investigators, argues solar geoengineering could inexpensively decelerate global warming. Keith is a professor of Applied Physics, School of Engineering and Applied Sciences (SEAS) and Professor of Public Policy, Harvard Kennedy School at Harvard University.

A TIME magazine Hero of the Environment 2009, Keith stated, “The objective is not to alter the climate, but simply to probe the processes at a micro scale,” and, “the direct risk is very small.”

A British government-funded project – Stratospheric Particle Injection for Climate Engineering (Spice) – was cancelled last year after patent issues and public outcry by global NGOs, some arguing the project was a “Trojan horse” that would begin full-scale deployment of the environmental modification (ENMOD) technology.

A scientific study report published in June concludes that solar radiation management could decrease rainfall 15% in areas of North America and northern Eurasia and more than 20% in central South America.

In 1977, the UN General Assembly ratified an international Convention banning ‘military or other hostile use of environmental modification techniques having widespread, long-lasting or severe effects.’ It defined ‘environmental modification techniques’ as ‘any technique for changing – through the deliberate manipulation of natural processes – the dynamics, composition or structure of the earth, including its biota, lithosphere, hydrosphere and atmosphere, or of outer space.’

People say that the strange weather that we’re having is related to climate change,” said Michael Murphy on New Zealand’s The Vinny Eastwood Show Wednesday. “The question is, ‘What is changing the climate?”

“They can literally disperse rainfall or and build clouds and storms depending on what they put in there.”

(Watch “Michael Murphy and Vinny Eastwood Why in the world are they spraying?” embedded on this page at the left.)

Murphy’s just released second documentary, “Why in the World Are They Spraying?” features, among other scientists, world-renown human rights defender Dr. Nick Begich.

Nothing terrifies more than weather gone wild. The military document, “Weather as a Force Multiplier: Owning the weather by 2025” indicates that’s just what the Pentagon has aimed to do, but silence remains among the scientific community about this has created a credibility gap.

Recently on Democracy Now!, author of Climate Wars: The Fight for Survival as the World Overheats and geoengineer proponent Gwynne Dyer finally admitted (after pressed) that geonegineering “links with both the Pentagon, I think, and the scientific community, and with corporate funding.”

“While global warming is undoubtedly an important factor, it does not fully account for (todays’) extreme and unusual weather patterns,” asserts Professor Michel Chossudovsky, Centre for Research on Globalization director.

Weather-modification, according to US Air Force document AF 2025 Final Report, ‘offers the war fighter a wide range of possible options to defeat or coerce an adversary’ and, it says, extend to the triggering of floods, hurricanes, droughts and earthquakes:

Weather modification will become a part of domestic and international security and could be done unilaterally… It could have offensive and defensive applications and even be used for deterrence purposes. The ability to generate precipitation, fog, and storms on earth or to modify space weather, … and the production of artificial weather all are a part of an integrated set of technologies which can provide substantial increase in US, or degraded capability in an adversary, to achieve global awareness, reach, and power. (US Air Force, emphasis added. Air University of the US Air Force, AF 2025 Final Report, http://www.au.af.mil/au/2025/ emphasis added)”

“The significant expansion in America’s weather warfare arsenal, which is a priority of the Department of Defense is not a matter for debate or discussion,” stated Chossudovsky in 2004, calling the subject matter “a scientific taboo.”

This taboo constitutes as much of a human rights violation as efforts by fossil fuel companies and other polluters dismissing climate change.

“While environmentalists blame the Bush administration for not having signed the Kyoto protocol, the issue of ‘weather warfare’, namely the manipulation of weather patterns for military use is never mentioned,” Chossudovsky wrote. Nor was weather warfare an included topic in the most recent Climate Change conference in Rio.

“The US Air Force has the capability of manipulating climate either for testing purposes or for outright military-intelligence use,” economist Chossudovsky wrote. “These capabilities extend to the triggering of floods, hurricanes, droughts and earthquakes. In recent years, large amounts of money have been allocated by the US Department of Defense to further developing and perfecting these capabilities.

“Ironically,” Chossudovsky remarked, “the Pentagon, while recognizing its ability to modify the World’s climate for military use, has joined the global warming consensus. (This disguises the Pentagon’s perfidy.) In a major study (pdf), the Pentagon has analyzed in detail the implications of various global warming scenarios.

“The Pentagon document constitutes a convenient cover-up. Not a word is mentioned about its main weather warfare program: The High-Frequency Active Auroral Research Program (HAARP) based in Gokona, Alaska – jointly managed by the US Air Force and the US Navy.”

In, Chemtrails: Aerosol and Electromagnetic Weapons in the Age of Nuclear War. researcher Amy Worthington accuses the Pentagon of “ecological terrorism” with its weather warfare already in use and says it has already “severely compromised public health, according to thousands of testimonials.”

Under the UNFCCC, the IPCC is mandated ‘to assess scientific, technical and socioeconomic information relevant for the understanding of climate change’ – including environmental warfare.

The IPCC acknowledges ‘Geo-engineering,’ but its underlying military applications are neither object of policy analysis nor scientific research in IPCC’s thousands of pages of reports and supporting documents, based on the expertise and input of some 2,500 scientists, policymakers and environmentalists, reports Chossudovsky.

This exclusion might be because member governments must approve IPCC reports and the U.S. repeatedly forces censorship.

“Geoengineering is trying to solve the problems with the same old mindset of controlling nature,” human rights defender and scientist Vandana Shiva has said. “And the phrase that was used, of cheating — ‘Let’s cheat’ — You can’t cheat nature. That’s something people should recognize by now.”

Shiva remarked, “The problem of geoengineering or genetic engineering is a bunch of experts sitting with a bunch of corporations saying, ‘We’ll decide on behalf of the people.’

J. Robert Oppenheimer thought in 1945 as he watched the world’s first atomic bomb tested, “Now I am become death, the destroyer of worlds.”

“Today’s geoengineering researchers are no doubt aware of their ability to become ‘destroyer of worlds,’ Australian Broadcasting Corporation reported in 2010.