It never ceases to amaze me how these people make  statements about Geoengineering as though no one notices that it was implemented years ago and is currently a full scale operation.  They’re feeling pretty secure that you’re all fast asleep, folks.

Prof. Jost Heintzenberg, Leibniz Institute Leipzig, is warning other scientists they don’t know enough to begin tinkering with Earth’s atomsphere with geoengineering experiments to influence climate change.  If they do, the results could be disastrous for every living thing.  Heintzenberg is a scientist at the prestigious Leibniz Institute for Tropospheric Research which belongs to the Leibniz Association (WGL) in Germany, and which is named after Gottfried Wilhelm Leibniz (1646 – 1716), philosopher and universal scholar.

Carbon dioxide is not the only problem we must address if we are to understand and solve the problem of climate change. According to research published this month in the International Journal of Global Warming, we as yet do not understand adequately the role played by aerosols, clouds and their interaction and must take related processes into account before considering any large-scale geo-engineering.

There are 10 to the power of 40 molecules of the greenhouse gas carbon dioxide in the atmosphere. Those carbon dioxide molecules absorb and emit radiation mainly in the infrared region of the electromagnetic spectrum and their presence is what helps keep our planet at the relatively balmy temperatures we enjoy today.

Too few absorbing molecules and the greenhouse effect wanes and we would experience the kind of global cooling that would convert the whole planet into a lifeless, ice-encrusted rock floating in its orbit. Conversely, however, rising levels of atmospheric carbon dioxide lead to a rise in temperature. It is this issue that has given rise to the problem of anthropogenic climate change. Humanity has burned increasing amounts of fossil fuels since the dawn of the industrial revolution, releasing the locked in carbon stores from those ancient into the atmosphere boosting the number of carbon dioxide molecules in the atmosphere. 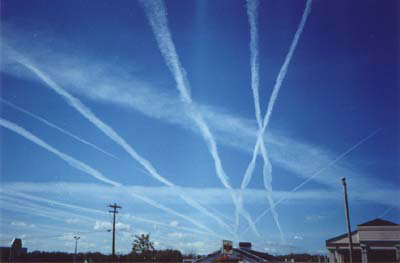 However, these rising carbon dioxide levels do not complete the picture of climate change, scientists must also take into account tiny particles in the atmosphere, aerosols, made up of condensing vapours, soot, and dust. There is certainly no doubt that these species affect how much solar energy is reflected from the earth’s surface and how much is trapped. According to Jost Heintzenberg of the Leibniz-Institute for Tropospheric Research, in Leipzig, Germany, the number of aerosol particles is a mere 10 to the 26. Of course, the weight we lend to a single carbon dioxide molecule compared to an aerosol particle, which might contain many more than a single molecule is a moot point.

A conceptualized image of an unmanned, wind-powered, remotely controlled ship that could be used to implement cloud brightening.

Nevertheless, Heintzenberg sees a conundrum in how to understand atmospheric aerosols and how they affect cloud formation and ultimately influence climate. There are multiple feedback loops to consider as well as the effect of climate forcing due to rising carbon dioxide levels on these species and vice versa. “The key role of aerosols and clouds in anthropogenic climate change make the high uncertainties related to them even more painful,” says Heintzenberg. It is crucial that we understand their effects.

Geo-engineers are considering projects on an enormous scale that might one day be used to manipulate levels of atmospheric aerosols and influence cloud formation in order to cool our planet. Such efforts while seeming fanciful today might eventually allow us to influence, if not take control of, the climate to some extent. If the models fail us in terms of aerosols and clouds then such manipulations might cause more problems than they fix.

“Before considering such remedies the aerosol-cloud-climate conundrum needs to be reduced to a level of uncertainty that is comparable to those related to anthropogenic greenhouse gases,” explains Heintzenberg. “Considering the complexity of the aerosol-cloud system the challenge will be to identify the necessary essential knowledge and differentiate that from marginal details and focus research efforts on these essentials in order to simplify the complex aerosol-cloud system without losing indispensable features,” he says.