Geoengineering And Ocean Die Off, It’s Not Just Fukushima 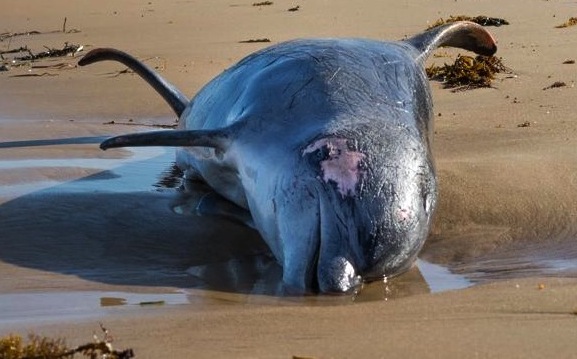 Stratospheric aerosol geoengineering is certainly having horrific effects on the entire world including the oceans. There are other forms of geoengineering focused specifically on the oceans. Those in power do not care what means they utilize to accomplish their goals, they never have. They are always blind to the overall long term decimation they cause in the pursuit of a short term goal. The oceans of the world are dying. There are a great many causes, including Fukushima, but is there a major factor that is being hidden from view? Again, the die off is global, not just in the Pacific. Fukushima is, of course, a cataclysm, but only one of many. There are big die offs occurring far from the reach of Fukushima's radiation.Though Fukushima radiation is contaminating the entire Pacific ocean and beyond, this contamination is not the primary causal factor behind the unfolding marine ecosystem collapse. Our seas are heating radically, becoming hypoxic and anoxic, and acidifying, there are countless anthropogenic factors / causes in this equation. The bottom is falling out from the ocean food chain, this will affect the entire web of life on Earth.  We know the power structure has long since unleashed the full destructive fury of climate engineering in the skies. We would be fools not to believe that they have been doing the same in the oceans for just as long. Dead zones are appearing everywhere in our seas, mass fish kills are now common. Just as the "official agencies" and "experts" have been completely silent about the cataclysmic climate manipulation, they have likely also turned two blind eyes to lethal ocean carbon sequestration experiments. The article below is new, it eludes to the possible if not probable likelihood of radical carbon sequestration engineering experiments. Carbon sequestration with iron fertilization experiments are already well documented. To keep the captured carbon from being quickly recycled back into the atmosphere by bacterial interaction an engineered virus could be used. Is this already happening? Why would we think this sort of experimentation is not being done? Why would anyone believe the geoengineers are not also experimenting in our oceans? Hypoxic zones (low oxygen) and anoxic zones (no oxygen) are increasing rapidly in our oceans. Algae blooms are associated with such zones. Are engineered viruses being used to sequester carbon from engineered algae blooms at the expense of killing our oceans? Perhaps a bit more time will unfold this mystery. Read the article below and decide for yourself if the dots seem to connect. The power structure is becoming more desperate and dangerous by the day. Their destructive actions will only get worse until all of us stand up in the fight to expose and stop them.
Dane Wigington
geoengineeringwatch.org

Algae might seem easy to ignore, but they are the ultimate source of all organic matter that marine animals depend upon. Humans are increasingly dependent on algae, too, to suck up climate-warming carbon dioxide from the atmosphere and sink it to the bottom of the ocean. Now, by using a combination of satellite imagery and laboratory experiments, researchers have evidence showing that viruses infecting those algae are driving the life-and-death dynamics of the algae's blooms, even when all else stays essentially the same, and this has important implications for our climate.

According to results reported in the Cell Press journal Current Biology on August 21, a single North Atlantic algal bloom, about 30 kilometers in radius, converted 24,000 tons of carbon dioxide from the atmosphere into organic carbon via a process known as carbon fixation. Two-thirds of that carbon turned over within a week as that bloom grew at a very rapid rate and then quickly met its demise. A closer look at those algae revealed high levels of specific viruses infecting their cells.

To put it in perspective, Assaf Vardi of the Weizmann Institute of Science in Israel says that this patch of ocean fixes about as much carbon as an equivalent patch of rainforest and then almost immediately turns much of it over.

"This is, of course, only one patch out of numerous co-occurring patches in other parts of the Atlantic Ocean," adds Ilan Koren, also of the Weizmann Institute, not to mention those algal blooms that appear in other seasons and ecosystems. "While the impact that viruses have on the entire ecosystem was previously estimated to be very large, we provide the first approach to quantify their immense impact on open ocean blooms."

Important questions remain about the ultimate fate of all that carbon taken in by algal blooms, the researchers say. Much of it is probably recycled back to the atmosphere by bacteria. But it's also possible that the virus-infected algae release sticky sugars and lipids, leading their cells and the carbon within them to sink faster to the ocean floor.

"If the latter scenario is true, it will have a profound impact [on] the efficiency of carbon dioxide 'pumping' from the atmosphere to the deep ocean," Vardi says. "This carbon will then have a better chance [of being] buried in the ocean sediment."

The findings will improve models that predict the future of algal blooms and their impact on climate. They also serve as a reminder that sometimes it really is the little things that matter.

"These interactions begin when one virus infects one cell, but they end up causing the collapse of massive blooms that span thousands of kilometers," Koren says. "These life-and-death interactions on the micro scale have huge importance on the large scale and vice versa."

The above story is based on materials provided by Cell Press. Note: Materials may be edited for content and length.

22 Responses to Geoengineering And Ocean Die Off, It’s Not Just Fukushima