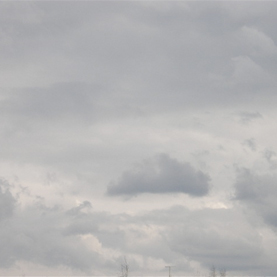 Efforts to reflect away the sun’s rays might also make the sky whiter, one of many reasons some distrust such geoengineering schemes.  By Lauren Morello and ClimateWire   Scientific American<—article

The white haze that hangs over many major cities could become a familiar sight everywhere if the world decides to try geoengineering to create a cooler planet.

Scientists have long suspected that one oft-discussed geoengineering technique — shooting tiny sulfate particles into the upper atmosphere to deflect sunlight — could turn the blue sky white. Nature has already provided a basic proof of concept. When Mount Pinatubo erupted in the Philippines in 1991, spewing tons of sulfate particles in the atmosphere, it temporarily whitened the sky.

Now a new study by researchers at the Carnegie Institution for Science attempts to determine just how big the effect from man-made geoengineering would be.

Adding enough sulfate to the stratosphere to block 2 percent of the sun’s light would make the sky three to five times brighter, they report in a paper that will be published in the journal Geophysical Research Letters.

That is roughly the level of sulfate geoengineering needed to counteract the warming that would result if the level of carbon dioxide in the atmosphere climbed to 560 parts per million, up from roughly 390 ppm today.

The world might be cooler, but blue skies would become a little less blue, the scientists report. Even remote, sparsely inhabited areas would lie under a whitish sky resembling the haze that now blankets cities like Paris.

And the injection of a continuous stream of sulfate particles would lend sunsets a man-made afterglow.

“What happens when you put a layer of sulfate aerosols into the stratosphere, they scatter light. But they don’t scatter light equally. Depending on the size of the particle, they might scatter blue light differently than red light.”

It is that scattering effect that would change the sky’s appearance, he said.

Some people might not notice. Others might not care. But even folks who can’t tell a picture-postcard blue sky from its milky, geoengineered cousin might be able to detect other side effects of using sulfate to cool the planet.

Blocking just 2 percent of sunlight that would normally reach the Earth — the scenario depicted in the study — would probably be enough to create measurable drops in energy created by concentrated solar thermal power systems, which rely on direct sunlight.

But it could be a boon to plants, which showed a small but measurable uptick in growth in the months after Mount Pinatubo erupted in 1991.

That’s because injecting sulfate particles into the atmosphere — by volcano or man-made methods — scatters enough of the sun’s rays to increase the diffuse sunlight many plants thrive on. The resulting uptick in photosynthesis would likely increase the amount of carbon pulled from the atmosphere by plants, researchers said.

Majority frowns on geoengineering — poll
Meanwhile, a poll released this week by the Brookings Institution suggests that Americans are concerned about the safety and effectiveness of geoengineering.

Sixty-five percent of participants said they somewhat or strongly disagree that if global warming takes place, “scientists would be able to find ways to alter the climate in a way that limits problems.”

A slimmer majority, 45 percent, disagreed with the notion that scientists could develop “atmospheric engineering” methods to cool the planet.

But most of the 887 participants in the survey — 69 percent — said they “strongly” or “somewhat” believed the harm from adding material to the atmosphere would outweigh the benefits. The poll carries a margin of error of 3.5 percent.

One Response to Geoengineering Could Turn Skies White