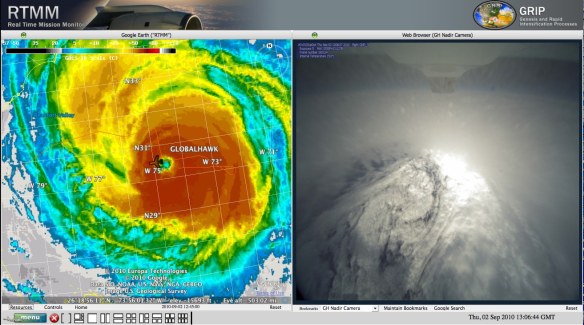 LandStrike 2009
Landstrike is the gripping story of Hurricane Nicole from its birth in the Altantic Ocean to its catastrophic rampage up New York City’s Hudson River. It is also an enthralling account of the horrific storm’s aftermath as residents, suddenly isolated from the world without electricity, food, water and even communications try to survive in Stone Age conditions!

This fictional book wasn’t far off the mark, with one big caveat: the author didn’t take weather modification into consideration.  Truth is stranger than fiction, so brace yourself for the true story of the climate engineers that seek to control mother natures’ raw fury; the hurricane.

I live in South Carolina, and hurricanes have been always been a part of my life.  Back in 1989, Hurricane Hugo leveled my hometown of Sumter, South Carolina.  Hugo, a Category 4 hurricane with 135 mph winds, the second strongest hurricane (since reliable records began in 1851) to hit the U.S. East Coast north of Florida.  We came together as a community, had coffee and breakfast made on a gas grill, smelled terribly for days, even ate at the Red Cross shelter a time or two.  My father, my brother and I spent two weeks travelling through neighborhoods clearing the roads with our chainsaws, and despite the destruction, I remember the aftermath fondly.

Anyone who’s been through a hurricane knows the danger and would give anything to see the hurricane bounce right back out to sea.  Oddly enough, that seems to be happening with increasing abundance.  Time and time again, the hurricanes take their usual track, only to suddenly boomerang back from whence they came.  Odd behavior indeed. What if I told you the Department of Homeland Security was interested in just this sort of thing:

So let’s quickly cover the history of scientists screwing with hurricanes and end with their latest handiwork in part 2: Hurricane Sandy.

Q: What happened to the idea of seeding hurricanes to weaken them?
A: During the 1960s the U.S. Navy and the National Oceanic and Atmospheric Administration (NOAA) tried a more sophisticated way of making hurricanes weaker. This research was known as Project Stormfury. The basic idea was to seed clouds just outside the eye wall with silver iodide. The silver iodide, which is widely used in cloud seeding, encourages supercooled water – water that’s colder than 32 degrees F but is liquid, not ice – to freeze. This releases latent heat, which would make the clouds grow, stealing some of the humid air that’s helping the eye wall clouds grow and create strong winds.

This seemed to work with Hurricane Beulah in 1963 and Hurricane Debbie in 1969. But, scientists had no way of knowing whether these two storms would have weakened any way at that time. Hurricanes often weaken and then regain strength naturally. Also, since the 1980s researchers have found that most hurricanes don’t have enough supercooled water for seeding to work.

Concerns were also raised that the experiments could make a storm change course, hitting some place that it otherwise wouldn’t. The experiments did increase hurricane knowledge and also led to the purchase of the two WP-3 airplanes that NOAA still uses for hurricane research and tracking.

Bob Sheets, the retired director of the National Hurricane Center, and I have an entire chapter on Project Stormfury in our book, Hurricane Watch: Forecasting the Deadliest Storms on Earth. Bob was the last director of Stormfury.

Q: Is trying to modify hurricanes such a good idea after all?
A: Today, scientists are more cautious about trying to modify the weather than they were during the 1960s. Hurricanes, along with other storms and ocean currents, help balance the Earth’s heat budget. Trying to change hurricanes could have consequences that no one intended.

After Hurricane Katrina, the university-military-industrial complex got their way, and the Department of Homeland Security commissioned studies to divert or diminish hurricanes.

The Hurricane Modification Workshop was initiated by Under Secretary Jay Cohen, DHS S&T, to investigate the possibility of minimizing the tremedous loss of life, property, and economic stability by reducing the destructive forces of a hurricane.  This may be accomplished by modifying its track, speed, winds, and rain.

“CARBON BLACK MAY INCREASE THE INTENSITY OF HURRICANES”

“But if we can decrease the intensity of a hurricane from a level five to a level four, then the amount of damage can be dramatically reduced.”

The senior official responsible for science and technology at the Department of Homeland Security, Jay Cohen, has given his support to the new hurricane reduction programme, which is expected to receive funding in October for the first phase of research.

The project has been given an estimated price tag of around $64m (£32m) over six years. Scientists will first conduct tests using models and small scale experiments before the most promising idea is developed for large scale testing.

In less than two weeks, NASA scientists will begin their quest for the holy grail of hurricane research.

The exact conditions required to kickstart a tropical depression into a hurricane largely remain a mystery. Though scientists know many of the ingredients needed, it is unclear what processes ultimately drive depressions to form into the intense, spinning storms that lash the U.S. coasts each summer.

“Hurricane formation and intensification is really the ‘holy grail’ of this field,” said Ed Zipser, an atmospheric scientist at the University of Utah and one of three program scientists helping to lead the Genesis and Rapid Intensification Processes (GRIP)Project.

Measurement of Interstitial Particles During the PLOWS and the GRIP Aircraft Campaigns https://ams.confex.com/ams/91Annual/webprogram/Paper186716.html

HAARP, Satellites, and Hurricanes, oh my!

Inspired by Nikola Tesla’s “Wireless Transmission of Electricity”, Bernard Eastlund (creator of HAARP) envisioned pumping natural gas from the ground, converting it to an electrical signal, and broadcasting that energy to an aircraft carrier, plane, or military base over the horizon (more on this in part 2, link at the end of this article.)  He’s also trying to build satellites for the specific purpose of geoengineering storms:

At the very least, we know that the USAF is actively seeking space-based weather modification technology, if it isn’t already available:

Chapter 3 – An Operational Analysis for Air Force 2025: An Application of Value-Focused Thinking to Future Air and Space Capabilities (written in 1996)

The damage done to New Orleans in 2005 has spurred two rival teams of climate experts, in America and Israel, to redouble their efforts to enable people to play God with the weather.

Hurricane Earl as seen from the International Space Station.

In 1968 the US military proposed Solar Powered Satellites in geostationary orbit some 40,000 km above the earth, which would intercept solar radiation using solar cells on satellites and transmit it via a microwave beam to receiving antennas, called rectennas, on earth. The US Congress mandated the Department of Energy and NASA to prepare an Environmental Impact Assessment on this project, to be completed by June 1980, and costing $25 Million. This project was designed to construct 60 Solar Powered Satellites over a thirty year period at a cost between $500 and $800 thousand million (in 1968 dollars), providing 10% of the US energy needs in the year 2025 at a cost of $3000 per kW. At that time, the project cost was two to three
times larger than the whole Department of Energy budget, and the projected cost of the electricity was well above the cost of most conventional energy sources. The rectenna sites on earth were expected to take up to 145 square
kilometres of land, and would preclude habitation by any humans, animals or even vegetation. Each Satellite was to be the size of Manhattan Island.

Welcome to DEATHRAYTHEORP, beaming deadly power rays to your home since 2011

All the details on SPS and HAARP can be found here.

HERE IS AN ARTIST’S CONCEPT OF WHAT BEAMING ALL THAT ENERGY DOWN TO THE GROUND LOOKS LIKE:

Climatological and heating effects of the microwave power trans­mission system in the lower atmosphere.

President Carter (not Lil Wayne) approved the SPS Project and gave it a go-ahead, in spite of the reservation which many reviewers, myself included, expressed. Fortunately, it was so expensive, exceeding the entire Department of Energy budget, that funding was denied by the Congress. I approached the United Nations Committee on Disarmament on this project, but was told that as long as the program was called Solar Energy by the United States, it could not be considered a weapons project. The same project resurfaced in the US under President Reagan, moved to the much larger budget of the Department of Defence, and called Star Wars. Since this is more recent history, I will not discuss the debate which raged over this phase of the plan.

Nobody can say for certain what the military has up in space, but their message is coming in loud and clear: They want satellites that bring natures fury under their control.