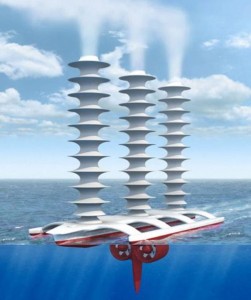 A geoengineering technique referred to as “marine cloud-brightening” (MCB) could cancel out the effects of global warming in a world with double the CO2 concentration of the pre-industrial world, according to a new study.

The MCB method could now be tested in the real world after scientists published a proposal for an experiment to test the long-held theory.

The process involves spraying a jet of small sea water particles into the atmosphere, which encourages the development of clouds. The additional cloud cover then reflects a greater proportion of the sun’s energy back into space creating a cooling effect at the earth’s surface.

The idea is not an especially new one with designs of so-called “albedo yachts”, named after the scientific principle of the earth’s varying absorption and reflectivity of the sun’s energy – appearing several years ago.

The latest paper, published in the journal of the Royal Society, pushes the prospect of a real world experiment closer however.

It gives more details on optimum article size, potential test sites off the coast of Peru, California and Namibia and predicts the scale of the methods effects.

Climate models including the addition of MCB suggest that the practice could “balance” global warming up until a point whereby atmospheric CO2 levels are double that of the pre-industrial era at around 560 ppm.

The current concentration is around 394 ppm with a level of 350 ppm thought to be necessary to prevent catastrophic warming beyond 2°C.

Critics of geoengineering say that further human-induced changes to our climate system, regardless of good intentions, are unwelcome and could lead to alterations that we cannot predict.

The authors of the research seek to address these concerns stating that before the scheme is implemented it must be determined that “the undesirable climatic responses to geoengineering perturbations are minimal; certainly, they should be no worse than those associated with changes induced in the climate system from the inadvertent human activity that geoengineering is aiming to mitigate.”

VIDEO: How cloud  seeding works, from the BBC’s ‘Five Ways to Save the World‘