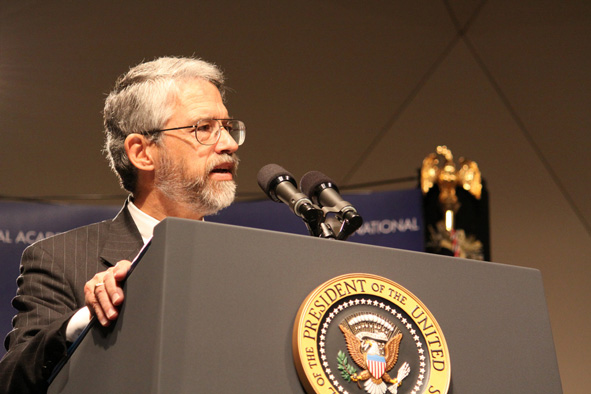 Tinkering with Earth’s climate to chill runaway global warming – a radical idea once dismissed out of hand – is being discussed by the White House as a potential emergency option, the president’s new science adviser said Wednesday.

That’s because global warming is happening so rapidly, John Holdren told The Associated Press in his first interview since being confirmed last month.

The concept of using technology to purposely cool the climate is called geoengineering. One option raised by Holdren and proposed by a Nobel Prize-winning scientist includes shooting pollution particles into the upper atmosphere to reflect the sun’s rays.

Using such an experimental measure is only being thought of as a last resort, Holdren said.

“It’s got to be looked at,” he said. “We don’t have the luxury … of ruling any approach off the table.”

His concern is that the United States and other nations won’t slow global warming fast enough and that several “tipping points” could be fast approaching. Once such milestones are reached, such as complete loss of summer sea ice in the Arctic, it increases chances of “really intolerable consequences,” he said.

Twice in a half-hour interview, Holdren compared global warming to being “in a car with bad brakes driving toward a cliff in the fog.”

He and many experts believe that warming of a few degrees more would lead to disastrous drought conditions and food shortages in some regions, rising seas and more powerful coastal storms in others.

At first, Holdren characterized the potential need to technologically tinker with the climate as just his personal view. However, he went on to say he has raised it in administration discussions.

“We’re talking about all these issues in the White House,” Holdren said. “There’s a very vigorous process going on of discussing all the options for addressing the energy climate challenge.”

Holdren said discussions include Cabinet officials and heads of sub-Cabinet level agencies, such as NASA and the Environmental Protection Agency.

The 65-year-old physicist is far from alone in taking geoengineering seriously. The National Academy of Sciences is making it the subject of the first workshop in its new climate challenges program for policymakers, scientists and the public. The British Parliament has also discussed the idea. At an international meeting of climate scientists last month in Copenhagen, 15 talks dealt with different aspects of geoengineering.

The American Meteorological Society is crafting a policy statement that says “it is prudent to consider geoengineering’s potential, to understand its limits and to avoid rash deployment.”

Shooting sulfur particles (like those produced by power plants and volcanoes, for example) into the upper atmosphere, an idea that gained steam when it was proposed by Nobel laureate Paul Crutzen in 2006. It would be “basically mimicking the effect of volcanoes in screening out the incoming sunlight,” Holdren said.
Creating artificial “trees” – giant towers that suck carbon dioxide out of the air and store it.The first approach would “try to produce a cooling effect to offset the heating effect of carbon dioxide and other greenhouse gases,” Holdren said.But he said there could be grave side effects. Studies suggest that might include eating away a large chunk of the ozone layer above the poles and causing the Mediterranean and the Mideast to be much drier.

And those are just the predicted problems. Scientists say they worry about side effects that they don’t anticipate.

While the idea could strike some people as too risky, the Obama administration could get unusual support on the idea from groups that have often denied the harm of global warming in the past.

The conservative think tank American Enterprise Institute has its own geoengineering project, saying it could be “feasible and cost-effective.” And Cato Institute scholar Jerry Taylor said Wednesday: “Very few people would rule out geoengineering on its face.”

Holdren didn’t spell out under what circumstances such extreme measures might ever be called for. And he emphasized they are not something to rely on.

“It would be preferable by far,” he said, “to solve this problem by reducing emissions of greenhouse gases.”

Yet there is already significant opposition building to the House Democratic leaders’ bill aimed at achieving President Barack Obama’s goal of cutting greenhouse gas emissions 20 percent by 2020 and 80 percent by 2050.

Holdren said temperatures should be kept from rising more than 3.6 degrees. To get there, he said the U.S. and other industrial nations have to begin permanent dramatic cuts in carbon dioxide pollution by 2015, with developing countries following suit within a decade.

Those efforts are racing against three tipping points he cited: Earth could be as close as six years away from the loss of Arctic summer sea ice, he said, and that has the potential of altering the climate in unforeseen ways. Other elements that could dramatically speed up climate change include the release of frozen methane from thawing permafrost in Siberia, and more and bigger wildfires worldwide.

The trouble is that no one knows when these things are coming, he said.

Holdren also addressed other topics during the interview:

The U.S. anti-ballistic missile program is not ready to work and shouldn’t be used unless it is 100 percent effective. The system, which would be used to shoot down missiles from countries like North Korea or Iran “needs to be essentially perfect … that’s going to be hard to achieve.”
Holdren said NASA needs some changes. He said the Bush administration’s plan to return astronauts to the moon was underfunded so money was taken from science and aeronautics. Those areas, including climate change research, were “decimated,” he said.The administration will “rebalance NASA’s programs so that we have in space exploration, a suitable mix of manned activities and robotic activities,” Holdren said. Doing that “will only get under way in earnest when a new administrator is in place.”Holdren, who advises the president on such decisions, said he hopes Obama will pick a new NASA boss soon.