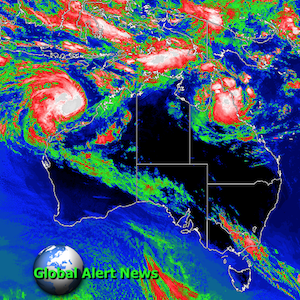 A number of new science studies have concluded Earth’s systems are nearing tipping points. Is this true? Or have the tipping points long since been passed? Is the human race spiraling toward near term extinction? A group of the world's top scientists has just stated on the record that we are perilously close to exactly that. Some still claim the global economy is growing, does this narrative hold up to the front-line facts? Extremely anomalous winter weather continues in parts of the US.  Is it natural? Drought and above average warmth persists in the US West, will the Colorado River run dry? Rivers in other parts of the world have already dried up, greatly diminishing food supplies. Chaos is unfolding in many regions, is this the future that await us all? The latest installment of global alert news is below.

The darkening horizon can be overwhelming, but this feeling can be conquered. Summoning a firm resolve to fully face the gathering storm head on can and does bring a deep sense of solace. If we stand together our collective efforts could yet make a difference. If we don’t take a stand, we will never know what we may have accomplished. Reaching a critical mass of awareness is the only way forward, sharing credible data from a credible source is key. Help us to sound the alarm, make your voice heard.
DW