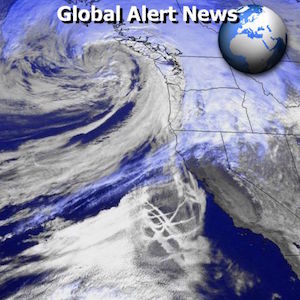 The geoengineering atrocities are wreaking so much havoc around the globe that even the power structure owned and controlled media outlets are now unable to avoid the climate engineering discussion. The cover of the November 2015 issue of National Geographic is focused on the "proposal" of global geoengineering. This is the feature article within the issue. "Popular Mechanics" has also just addressed the geoengineering and its "potential" utilization for suppressing hurricanes. Historical records prove beyond doubt that climate engineering has been fully deployed on a substantial scale for over 65 years (hurricane suppression for over 53 years), so why do major publications continue to lie about this blatant reality? Because that is what they are paid to do. Once global populations fully grasp the gravity of the biosphere collapse that is rapidly unfolding around them (further exacerbated by geoengineering), our paradigm will overturn. The power structure is trying desperately to hide reality for as long as possible. Unfortunately, most environmental groups and organizations are major participants in geoengineering denial. I and several other activists just attended a global warming presentation with standing room only, we made sure that the geoengineering subject was not omitted from this event. The weekly news update below covers the issues just mentioned in addition to the latest aspects of our disintegrating planet and the power structure's ongoing attempts to hide reality until the last moments.

Regarding the  October 28th Northern California college conference I attended on climate change, astoundingly, during the entire presentation of videos and speakers (which lasted nearly 2 hours), the subjects of stratospheric aerosol geoengineering and solar radiation management were not even mentioned by the presenters, not once. In the Q and A session one audience member was allowed to mention the issue which seemed to cause great discomfort to the program presenters. In the final moments of the event I stood and announced a few key points like the recent gag orders placed on NWS and NOAA employees, massive congressional reports on geoengineering,  and the fact that geoengineering must be included in any legitimate discussion on climate change. I informed the audience that free informational DVDs and flyers would be available in the hallway outside the event (we were told we were not allowed to distribute within the auditorium). I was able to corner and converse with several of the event organizers  in the hallway as they left. I have known them for years although they have long since distanced themselves from me and the geoengineering issue. On this night, they were not able to omit the geoengineering reality, or, in the end, to hide it from their audience. 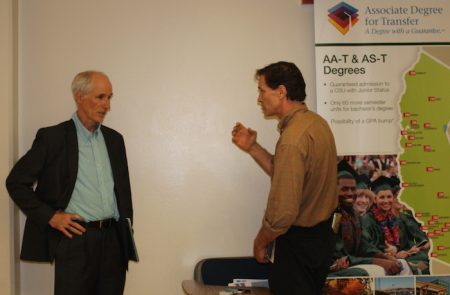 It is a profound paradox that many of the people who claim to care most about the environment are all too often the ones that are most unwilling to face the greatest environmental and human health threat of all, the global climate engineering assault. 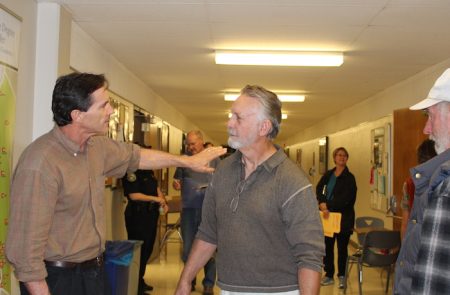 My most sincere thanks to all the anti-geoengineering activists that attended this event including Lori Bridgeford and Daphne Free who are pictured below. I am very grateful for every activists help with attending this event and distributing materials. 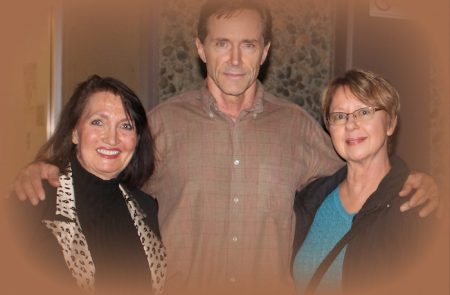 It will take all of us to change the course of certain demise that we are currently on, help us to sound the alarm.
DW