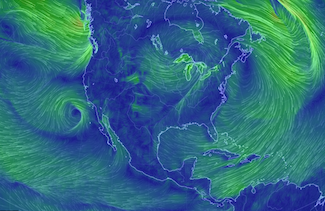 The latest completely engineered winter weather assault to be launched on US populations is the theatrically named "Winter Storm Europa"  How severe does the rapidly worsening weather whiplash have to get before populations face the fact that ongoing global climate engineering/weather warfare programs are decimating and derailing Earth's climate and life support systems?

How extreme, anomalous, and unnatural was the divide between extreme cold and record heat in the US on Sunday? The map below shows a shocking scenario. 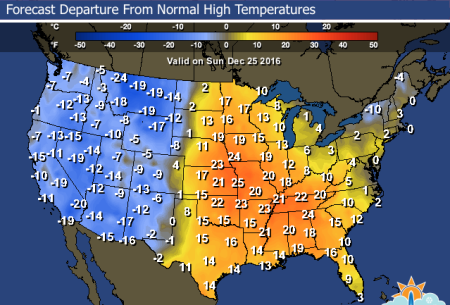 The increasingly extreme temperature swings are wreaking havoc on all life forms.

Skies all over the globe are being sprayed with highly toxic aerosols that are a core component of the climate intervention operations (these are NOT condensation trails).  In the forecast model below, warm flows of moisture from the Gulf of Mexico are chemically ice nucleated by the geoengineers. This process creates the short term chemical cool-downs that have now become the norm.

The bullseye of impact from "Winter Storm Europa" was yet again directed toward the Dakotas. 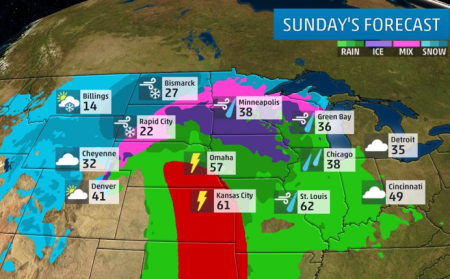 Ice storms are now almost always seen in the transition zones between warm flows of moisture (used as fuel for the engineered winter weather events) and the core of the chemically ice nucleated zones.

The Dakota Water Protectors have been consistently and severely impacted by extreme "winter weather". This has occurred even after the US experienced its warmest autumn ever recorded. Is this also just a coincidence? The video animation below has captured the chemical ice nucleation process being carried out by the climate engineers. Warm (far above freezing) flows of moisture can clearly be seen "flashing out" to snow for no apparent reason (meteorologically speaking). The power structure paid disinformation sources like "The Weather Channel" have now called this process "changing over to snow".  Official sources of weather forecasting and information are simply covering the tracks of the climate engineers as they have been paid to do. The radar loop shown below is undeniable proof of "chemical ice nucleation for weather modification".

Chemical ice nucleation of the warm flow of moisture from the south is clearly visible in the radar animation above. A close examination also reveals radio frequency transmission manipulation with an epicenter located in Rapid City. Why don't we have whistleblowers sounding the alarm on the climate engineering insanity? The illegal federal gag order on all National Weather Service and all National Oceanographic and Atmospheric Administration employees is certainly a major factor.

In the map below, major ice storm impacts (mentioned earlier) are seen in the transition zone where the warm flow of moisture from the south is being chemically nucleated. 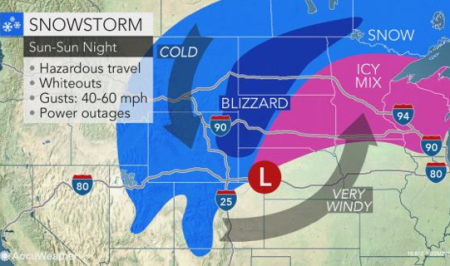 As mentioned earlier, disinformation sources (like The Weather Channel) are doing their best to convince populations that is is now normal to have a "warm side" and a "cold side" to a "winter storm".

The storm severity map below clearly shows the epicenter of the extreme weather from "WInter Storm Europa" is directly on top of the Dakota Water Protector protest zone. 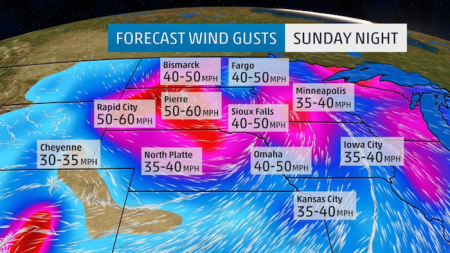 The red zones in the map above reveal the most severe impact zones of "Winter Storm Europa".

What is worth noting in the next map (shown below) are the extremely warm temperatures that exist in the flows of moisture that continue to feed "Winter Storm Europa". As this flow of moisture migrates to the North East, temperatures of over 60 degrees are visible only a short distance from the chemically cooled ice nucleation zones. We now almost never hear the power structure paid "weather forecasters" referring to snow levels based on elevations. Now, thanks to climate engineering, you are either on the warm side of the storm or the cold side of the storm. Elevation is now generally no longer a factor. 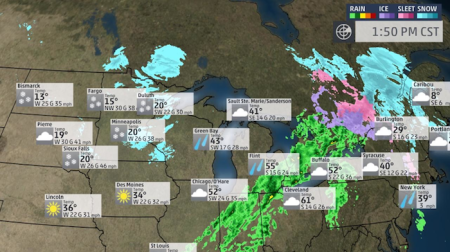 Scenarios like the one shown in the map above are historically unprecedented. Now such scenarios are considered the norm.

The completely out of control climate engineering cabal continues to try and cover up the rapidly worsening planetary meltdown with more and more "engineered winter" short term toxic cool-downs. The paradox is this, every climate intervention that the climate engineers carry out makes the overall warming of the planet worse, not better. The Geoengineers are destroying the ozone layer, disrupting the hydrological cycle, fueling forest fires, and contaminating the entire planet in the process. 2016 will be the third record shattering hot year in a row and this record will occur in spite of the fact that "official" agencies are UNDERREPORTING high temperatures, not exaggerating them. 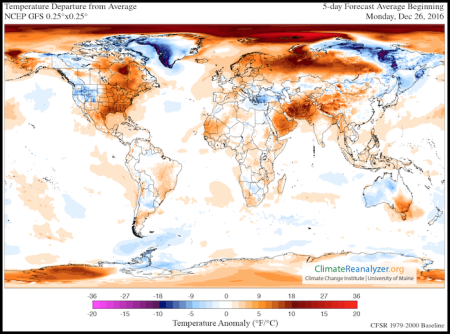 The meltdown of the polar region is of especially grave concern. The bright red zones at the top of this Temperature Anomaly map clearly reveals the ongoing Arctic meltdown. Massive formerly frozen methane deposits are now rapidly thawing and releasing. These methane releases may soon determine our collective fate, climate intervention programs are making the methane releases worse overall, not better.