Geoengineers Wage All Out Weather Warfare As The Climate System Unravels 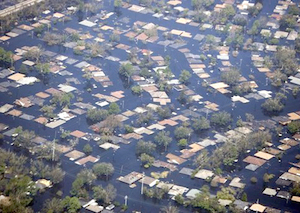 How long will populations remain oblivious to the relentless weather warfare and biological warfare assault being waged against them by the global power structure? Droughts, floods, chemically ice nucleated engineered snow storms, massive low and high pressure zones, the Earth's entire climate and life support systems are being pounded by the ongoing climate engineering insanity. The planet's climate system is unimaginably complex, if any part of it is deliberately altered, the whole system is affected. In the case of global geoengineering, the entire climate system is being intentionally manipulated, no weather can be considered truly natural at this point. From the dozens of ionosphere heaters to the constant atmospheric spraying, all is now tainted. The sprayed particulates used for the climate modification programs are highly toxic, every one of us is inhaling what the climate engineers are spraying with every breath we take. This is biological warfare. If populations do not wakeup and take a stand, we will soon have nothing left to salvage of our once thriving planet or our own health. The video below contains astounding recent film footage from around the globe.
Dane Wigington
geoengineeringwatch.org