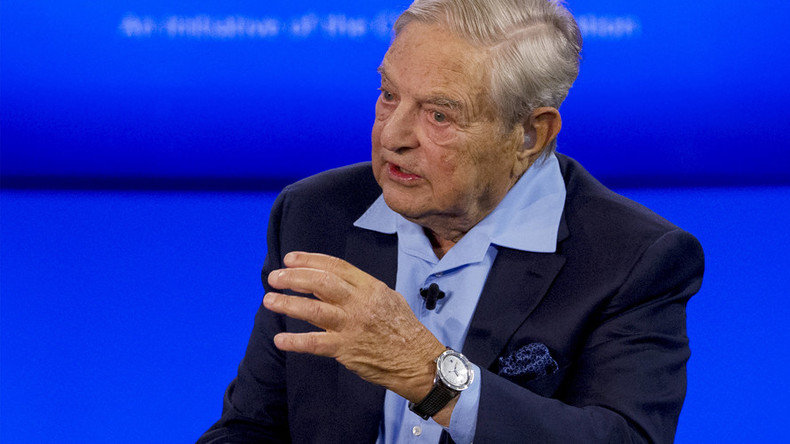 Share784
Tweet
+1
Share
Pin2
786 Shares
Source: RT
Google has partnered with an organization largely funded by billionaire George Soros to “fact-check” news stories, a move that could affect search results for certain news agencies.
Erica Anderson, Partnerships Manager at Google News Lab, announced Thursday that the company will partner with the International Fact-Checking Network (IFCN) at the Poynter Institute to “fact-check” news stories that appear on the search engine.

Proud to announce this awesome new partnership between @googlenewslab and @poynter to support fact checkers. https://t.co/K8VauOT5kl

“With so much information available around the clock and across devices, being able to understand at a glance what’s true and what’s false online is increasingly important,” Anderson said in a statement.

She said Google will work with the IFCN in three ways: increase the number of fact-checkers by holding “global fact-check workshops” and offering stipends for new fact-checking organizations; expanding the IFCN Code of Principles into new regions; and providing fact-checking tools to the IFCN community at no charge.

The code of principles requires news agencies to obey five commitments to ensure news agencies remain honest, transparent and nonpartisan. There are 36 signatories to the Code of Principles, including the left-leaning Washington Post Fact Checker and other fact-checking organizations from around the world.

Alexios Mantzarlis, the director of the IFCN at Poynter released a statement, saying the 12-month partnership will “enable the IFCN to encourage more fact-checking around the world, while also helping raise the standards and impact of existing initiatives."

Soros was recently criticised for transferring nearly $18 billion to his Open Society Foundations, making it the second largest charity in the US after the Bill and Melinda Gates’ Foundation. The charity has been accused of inciting so-called “color revolutions” to install governments friendly to the US.

Israeli Prime Minister Benjamin Netanyahu said through a statement that certain Soros funded organizations “defame the Jewish state and seek to deny it the right to defend itself.”

The Poynter Institute also receives funding from the Bill & Melinda Gates Foundation, the National Endowment for Democracy and the Omidyar Network, which is the nonprofit for liberal billionaire and  eBay founder, Pierre Omidyar.

The Google-Poynter partnership was announced days before executives from Google, Facebook and Twitter are scheduled to testify before the Senate and House Intelligence Committees on alleged Russian meddling in the 2016 presidential election.

Facebook, which has come under scrutiny for their part in spreading false news stories during the election, has also partnered with the Poynter Institute to launch its “disputed” news tag on stories deemed false by fact-checking organisations working with the social media giant.

Stories flagged by Facebook users as ‘fake news’ are passed on to these fact- checkers for verification. If the fact-checkers agree that the story is misleading, it will appear in news feeds with a "disputed" tag, along with a link to a corresponding article explaining why it might be false.