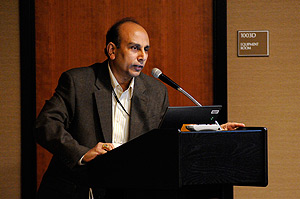 Holian’s talk drew scientists from across the Institute. Shown above (below)  is NIEHS Health Scientist Administrator Danielle Carlin, Ph.D., who was one of several attendees from the Institute’s Division of Extramural Research and Training. (Photo courtesy of Steve McCaw)

Engineered nanomaterials (ENMs) may be small, but their unique properties make them useful for many commercial and medical applications. However, the same properties that make ENMs so useful in the marketplace, also make their interactions with biological systems difficult to anticipate and critically important to explore.

NIEHS grantee Andrij Holian, Ph.D.,  a toxicologist and director of the Center for Environmental Health Sciences at The University of Montana, presented the latest results from his experiments on the health and safety aspects of ENMs Dec. 6, as part of the Institute’s Keystone seminar series.

ENMs are generally defined as particles less than 100 nanometers in size, with many different shapes and surface properties. They can be made from numerous materials, including carbon, titanium dioxide, gold, silver, and selenium, and they are used in the manufacture of a rapidly growing range of products. Because of their size and composition, nanoparticles may enter the cell and be unable to be degraded effectively.

Holian explained that the persistence of ENMs in the body makes them a concern for toxicologists. (Photo courtesy of Steve McCaw)

While ENMs, such as crystalline silica have been linked to such diseases as lung fibrosis, others are not active in the cell. “The real challenge is to understand what defines a harmful and benign nanomaterial,” explained Holian. “It is not obvious from the makeup of the material what defines a bioactive material.”

Holian explained that predicting the potential pathology of these particles is challenging, because of the preponderance of properties that may possibly perturb the cell. Besides the size, shape, and makeup of the material, nanoparticles differ in surface chemistry, charge, and hydrophobicity.

“The changes in the distribution once this material has been inhaled, where it goes in the lung, and how rapidly it disappears is another whole dimension that is layered on top of this field,” remarked Holian.

One experiment Holian described was a comparison of immune responses of macrophages after four hours of exposure to titanium dioxide particles of different shapes, including nanospheres, short nanobelts, and long nanobelts. Unlike the smaller and more spherical counterparts, the long nanobelts caused the greatest inflammatory response and persisted in the lungs for weeks. For Holian, the importance of nanoparticle shape led to comparison to another well-known environmental hazard.

“Clearly, it was the length of nanobelts that was an important determinant of biological outcome,” explained Holian, “similar to long asbestos fibers, which are also the most bioactive.”

Addressing the social and economic ramifications of future regulations of nanoparticles, Holian advocated a cautious approach in making conclusions about the safety of ENMs. “We don’t really understand all of the science ourselves [yet] and the last thing we want is a preemptive strike that may not be accurate,” Holian suggested. “But we are preemptively trying to study this [issue of safety]. We need to do this work and share this information with the public.”

Above all, Holian cautioned, “We don’t need another asbestos epidemic.”

Additionally, Holian argued that the future of regulating nanoparticles is an issue weighing the value of ENMs against their risk to human health. “These nanobelts have tremendous value in electronic industries and filtration. If we look at long silver and gold nanowires, I suspect that they all will be bioactive,” Holian postulated. “The goal may be to reduce human exposure, not necessarily to eliminate nanoparticle production.”