How To Get Involved 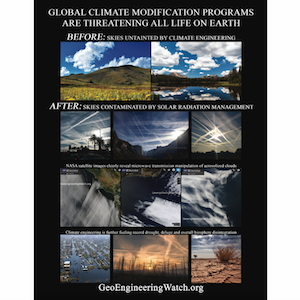 Approaching People on the topic of Geoengineering

First of all, semantics are extremely important in regard to the introduction of geoengineering. The geoengineering term is related to hard science, the "chemtrails" term has no such verifiable basis but rather leads anyone that Googles the term straight to "conspiracy theory" and "hoax" definitions. Use the terms "climate engineering" and "geoengineering".

Illegal covert climate engineering programs are wreaking havoc with Earth’s life support systems and contaminating every breath we take. How can we expose and halt the ongoing geoengineering / weather warfare assault? Sharing credible data and compelling photographic imagery is the most effective and efficient way to wake others up to the critical climate engineering issue. GeoengineeringWatch.org has made the decision to offer our newest informational materials to the public for the approximate cost of printing, handling and shipping. Because we have very large quantities printed, the cost is exponentially lower than individuals printing their own. All of us are needed in the essential effort to sound the alarm.

Click individual images for more information and / or purchasing 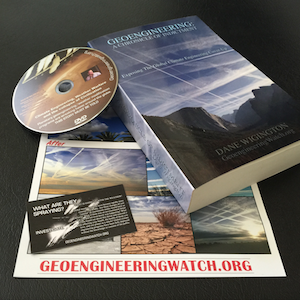 48 Responses to How To Get Involved