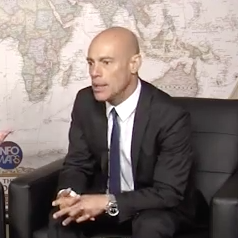 Not all doctors have sold out to the power structure and the "system". Dr. Billy DeMoss, D.C. is doing his best to get the avalanche of desperately needed awakening going by putting a tremendous amount of time and effort into the organization of the Cal Jam (the fastest growing chiropractic event on the planet) in Costa Mesa on March 27th through the 29th. This major annual event is likely to have its biggest year ever as concerned people from many arenas (including the general public) join together to share urgent information that needs to be heard. Global geoengineering will be one of the major topics covered at this event. Dr. DeMoss is a solid supporter of our fight against geoengineering. I am very impressed with Billy's approach to waking the masses to the lies our medical system feeds us. The 11 minute InfoWars interview with Dr. DeMoss covers the dire threats posed by issues like vaccinations and climate engineering, and the importance of the Cal Jam event for exposing these truths to a wider audience. Billy's commitment to exposing the most dire issues we collectively face is exemplary. Those interested in attending this extremely important event can find more information here.
Dane Wigington
geoengineeringwatch.org