Is Antarctica losing or gaining ice? 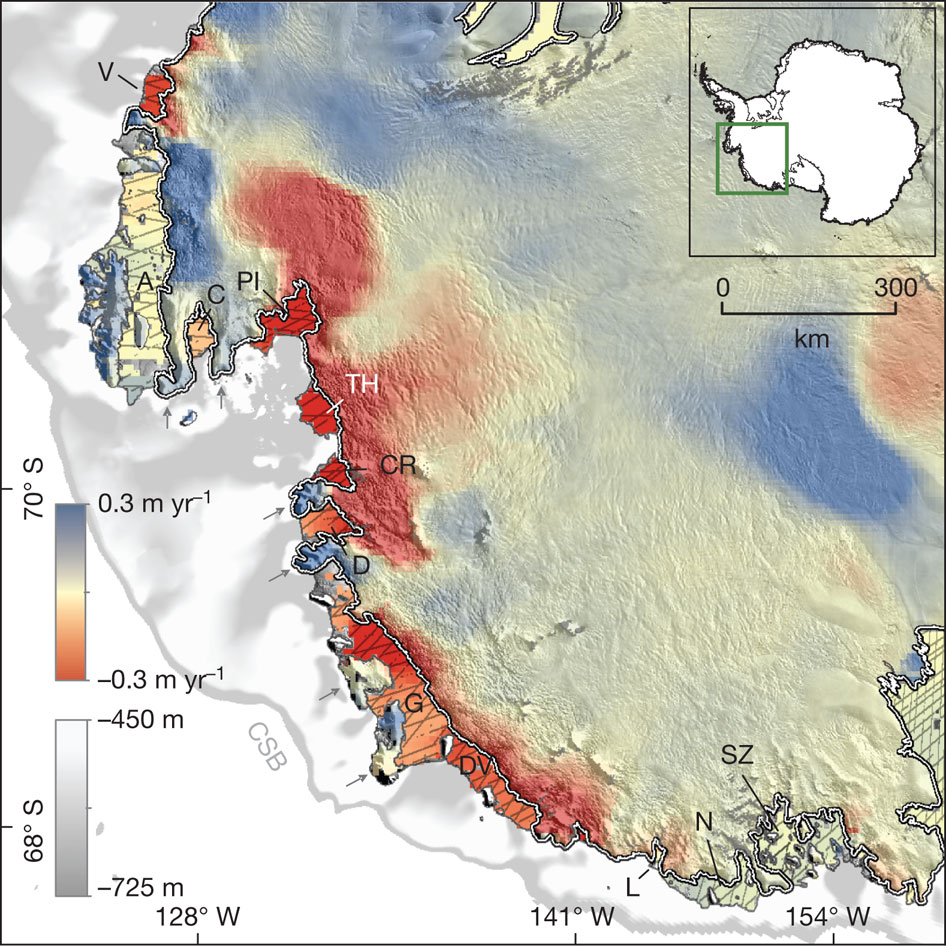 Climate myth: Antarctica is gaining ice
"[Ice] is expanding in much of Antarctica, contrary to the widespread public belief that global warming is melting the continental ice cap." (Greg Roberts, The Australian)

Antarctica is a continent with 98% of the land covered by ice, and is surrounded by ocean that has much of its surface covered by seasonal sea ice. Reporting on Antarctic ice often fails to recognise the fundamental difference between sea ice and land ice. Antarctic land ice is the ice which has accumulated over thousands of years on the Antarctica landmass through snowfall. This land ice therefore is actually stored ocean water that once evaporated and then fell as precipitation on the land. Antarctic sea ice is entirely different as it is ice which forms in salt water during the winter and almost entirely melts again in the summer.

Importantly, when land ice melts and flows into the oceans global sea levels rise on average; when sea ice melts sea levels do not change measurably but other parts of the climate system are affected, like increased absorbtion of solar energy by the darker oceans.

To summarize the situation with Antarctic ice trends:

Measuring changes in Antarctic land ice mass has been a difficult process due to the ice sheet's massive size and complexity. However, since the 1990s satellites have been launched that allow us to measure those changes. There are three entirely different approaches, and they all agree within their measurement uncertainties. The most recent estimate of land ice change that combines estimates from these three approaches reported (Shepherd and others, 2012) that between 1992 and 2011, the Antarctic Ice Sheets overall lost 1350 giga-tonnes (Gt) or 1,350,000,000,000 tonnes into the oceans, at an average rate of 70 Gt per year (Gt/yr). Because a reduction in mass of 360 Gt/year represents an annual global-average sea level rise of 1 mm, these estimates equate to an increase in global-average sea levels by 0.19 mm/yr, or 1.9 mm per decade. Together with the land ice loss from Greenland, this represents about 30% of the observed global-average sea level rise over this period.

Examining how this change is spread over time (Figure 1) reveals that the ice sheet as a whole was not losing or gaining ice in the early 1990s. Since then ice loss has begun, and is clearly seen to have accelerated during that time:

The satellite mission that is best suited to measuring land ice mass change is the Gravity Recovery and Climate Experiment (GRACE). The GRACE satellites measure changes in Earth's gravity and these can be directly related to surface mass variations such as the Antarctic ice sheet. Recent GRACE estimates of mass change show the dramatic mass loss in West Antarctica and mass gain in East Antarctica (King and others, 2012):

Figure 2: a, GRACE estimate of ice-mass change (2002-2012), with ice drainage basins numbered (boldface italics where trends are statistically different to zero with 95% confidence). b, c, Basin-specific lower and upper bounds on ice-mass change, respectively, reflecting the potential systematic error in the basin estimates (King and others, 2012).

The East Antarctic Ice Sheet is growing slightly over satellite period (Figures 1&2) but not enough to offset the other losses. It is not yet clear if the increase in mass in Antarctica is a short-term phenomena due to a particularly snowy period (Boening and others, 2012) or if it is a long-term trend. Increased snowfall in East Antarctica has long been predicted in a warming climate, so this is an important region to continue monitoring.

The land ice loss from the West Antarctic Ice Sheet is not due to surface melting, as the summer temperatures in Antarctica are generally always below freezing, and measured changes in precipitation cannot explain it either. Instead, the melting is occuring due to warm ocean water melting the land ice around its edges, resulting in a spreading of this ice loss inland:

Figure 3: Rates of lowering of land ice and its floating extensions in West Antarctica, 2003–2008 (Pritchard and others, 2012). Floating extensions of the land ice (ice shelves) that are labelled are Venable (V), Abbott (A), Cosgrove (C), Pine Island (PI), Thwaites (TH), Crosson (CR), Dotson (D), Getz (G), De Vicq (DV), Land (L), Nickerson (N) and Sulzberger (SZ). Arrows highlight areas of slow-flowing, grounded ice. Bathymetry landward of the continental-shelf break is in greyscale. The divide between floating and grounded ice is shown in white. The inset shows the location of the figure (green box) overlaid on the outline of Antarctica.

The influx in warm water onto the continental shelf in this region is not entirely understood but is probably at least partly linked to increased westerly winds that have occured as a result of reduced stratospheric ozone levels since the mid-20th Century (Gillet 2003, Thompson 2002, Turner 2009).

The Antarctic ice sheet plays an important role in the total contribution to sea level. That contribution is continuously and rapidly growing.

Antarctic sea ice has shown long term growth since satellites began measurements in 1979. This is an observation that has been often cited as proof against global warming. However, rarely is the question raised: why is Antarctic sea ice increasing? The implicit assumption is it must be cooling around Antarctica. This is decidedly not the case. In fact, the Southern Ocean has been warming faster than the rest of the world's oceans. Globally from 1955 to 1995, oceans have been warming at 0.1°C per decade. In contrast, the Southern Ocean has been warming at 0.17°C per decade. Not only is the Southern Ocean warming, it is warming faster than the global trend.

If the Southern Ocean is warming, why is Antarctic sea ice increasing? There are several contributing factors. One is the drop in ozone levels over Antarctica. The hole in the ozone layer above the South Pole has caused cooling in the stratosphere (Gillet 2003). This strengthens the cyclonic winds that circle the Antarctic continent (Thompson 2002). The wind pushes sea ice around, creating areas of open water known as polynyas. More polynyas lead to increased sea ice production (Turner 2009).

Another contributor is changes in ocean circulation. The Southern Ocean consists of a layer of cold water near the surface and a layer of warmer water below. Water from the warmer layer rises up to the surface, melting sea ice. However, as air temperatures warm, the amount of rain and snowfall also increases. This freshens the surface waters, leading to a surface layer less dense than the saltier, warmer water below. The layers become more stratified and mix less. Less heat is transported upwards from the deeper, warmer layer. Hence less sea ice is melted (Zhang 2007). An increase in melting of Antarctic land ice will also contribute to the increased sea ice production (Bintanga et al. 2013).

In summary, Antarctic sea ice is a complex and unique phenomenon. The simplistic interpretation that it must be cooling around Antarctica is decidedly not the case. Warming is happening – how it affects specific regions is complicated.

One Response to Is Antarctica losing or gaining ice?