Updated, Is Global Warming “An Inconvenient Lie”? A Public Response to Ed Griffin 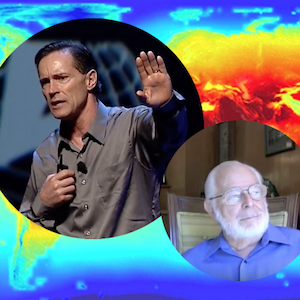 When I publicly documented the fact that Mr. Griffin's upcoming event will completely undermine the anti-climate engineering cause (on which all of our futures depend), Mr. Griffin promptly challenged me to debate the issue with himself and his "experts" (Lord Monckton and Tim Ball). I contacted the only radio show host who has previously interviewed all the parties involved: myself, Mr. Griffin, Tim Ball, and Lord  Monckton. This radio host is Jeff Rense, who is well known and respected in the alternative news community. Jeff's previous unbiased interviews of all the individuals in question is a clear reflection of his unbiased position. On Tuesday, November 22nd, Mr. Rense sent the following message to G Edward Griffin.

Dear Ed…
I hope this finds you well.  The world stage has become ever more dark and dangerous
as we all see on a daily basis.
I received a note from Dane yesterday in which he suggested we have a round table 'debate' between
you and Dane of the issue of GeoEngineering and the evidence for it.
We agreed this was the place to do it and I'd be very happy to donate a two hour segment
on the program to host you both and present your positions. Equal time will be the format.
If this is something you'd like to do, just say the word and I'll pull some dates together
for everyone to agree upon.
Will all good wishes…
Jeff

Mr. Griffin has, unfortunately, sent no response to this invitation, the invitation still stands. If Ed Griffin truly believes in the validity of his upcoming conference, why hasn't he accepted the debate challenge that he himself offered? The 13 minute video below is a public statement which makes clear all the reasons why G. Edward Griffin's disinformation event is so harmful to the critical effort of exposing and halting the ongoing climate engineering insanity. Griffin's top two speakers/experts (Lord Monckton and Tim Ball) completely deny the climate engineering reality and have stated on the record that all we are seeing in our skies is just "condensation" (which is of course false).

Is Global Warming "An Inconvenient Lie"?

Global warming disinformation is greatly harmful to the critical cause of exposing and halting climate engineering (which is greatly exacerbating planetary warming and poisoning the entire planet in the process). Though Al Gore is a criminal, and carbon credits are a scam, reality is still reality. Because patently false climate information is so harmful to the anti-geoengineering cause, we must not look the other way when individuals of noteriety push total disinformation on the public. Countless lies relating to the climate are so egregious and increasingly blatant that it is nearly impossible to imagine that they are still being propagated. Could a 3 day symposium pushing the "Global warming is a hoax" false narrative actually be carried out with a straight face while the planet is free falling into a state of total meltdown? While BOTH of the planets ice caps are at record low levels with the science community sounding the alarm? Are there people who would pay nearly $400 dollars to attend such a symposium and have so called " world's top experts" attempt to convince them that "global warming is the biggest deception in history"? Mr. Griffin claims to be fighting climate engineering, yet his top "experts" also completely deny the climate engineering issue. Exactly who would sponsor a "global warming is a myth" event? What would be their motive? The organizer of the "Global Warming, An Inconvenient Lie" conference (with top speakers that deny climate engineering) is Mr. Ed Griffin of "Freedom Force International" who seems to be running some sort of multi-level marketing program.  Who is Mr. Griffin's top "expert" for the upcoming "global warming is a hoax" event? Enter "Lord Monckton" of Benchley. (who has falsly claimed to be a member of the "House of Lords") 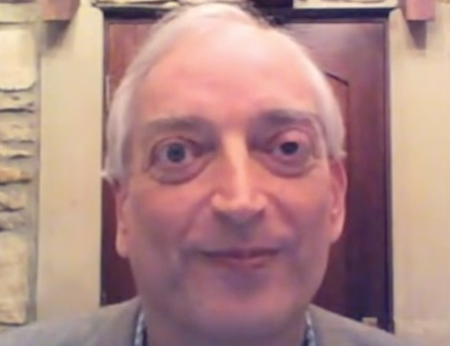 "Lord Monckton" has a long resume indeed, but in reality his resume is better described as a "wrap sheet" which should be examined by anyone who has any notion of attending this disinformation event. Why would "Lord Monckton" put so much time and energy into the "global warming is a hoax" false narrative? Could the fact that Monckton receives funding from the fossil fuel industry have anything to do with his tireless efforts to parrot the oil industry disinformation? Is this the same reason that "Lord Monckton" ardently denies the climate engineering issue in a shocking interview? Exactly as the fossil fuel industry and the geoengineers would want him to?

Who is the second string "expert" in the "global warming is a hoax" line up? Yet another fossil fuel funded actor, Tim Ball (who also denies climate engineering), 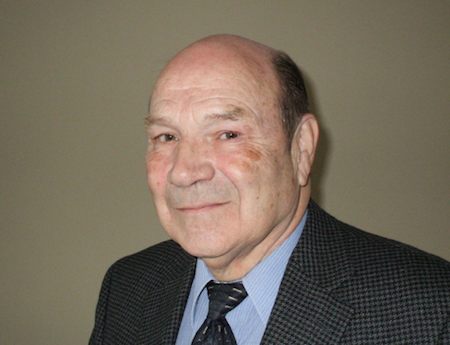 Tim Ball has been called "the lie that just won't die" for good reason. Ball's trail of disinformation has been well documented by numerous sources. An international radio show host (Vinny Eastwood) once invited Mr. Ball to debate the geoengineering issue with me on a live radio broadcast, Mr. Ball refused. He denies the reality of the issue, as does Mr. "Lord" Monckton. Individuals like Monckton and Ball are simply paid props in a rapidly disintegrating disinformation theater. There are more featured "experts" that are apparently pushing the "global warming is a hoax" disinformation, but you get the idea (again, denial of the true state of the climate greatly harms the fight to expose and halt climate engineering). Who is the head of the coming disinformation event? It's Mr. Ed Griffin. 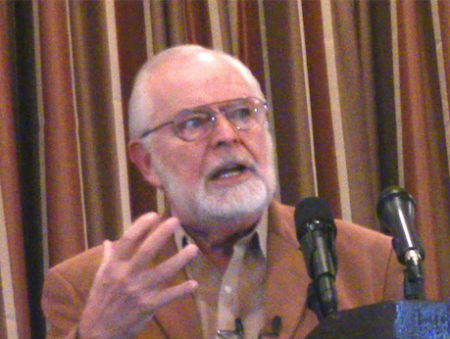 Ed Griffin made the following statement on the record in 2013:

What has happened since 2013? And was already inarguably happening for many decades before 2013? Anthropogenic activity has continued to inflict immense damage to the planet. This damage is fueling what may already be a runaway greenhouse effect. 2016 will break the global temperature records yet again, beating out the record just broken in 2015 which beat the record from 2014. Ice is at record low levels at the North Pole AND the South Pole.The anthropogenic (human caused) sources of decimation to our biosphere and climate of course includes climate engineering at the top of the list. Mr. Griffin is apparently already receiving emails of criticism from his followers for his ridiculously false position in regard to the state of the climate. Griffin actually just published one such message that stated "Griffin, you've got it wrong, climate change is real". Ed seems have been motivated to publish this criticism because he was proud of his answer to critic who had expressed justifiable concern about sea level rise submerging islands. What was Mr. Griffin's answer?

That is part of the global-warming myth. In some places….. the land is sinking…

So, according to Mr. Griffin there is no sea level rise, the land is just sinking. For the record, Mr. Griffin, rapidly rising sea levels are chewing away at shorelines all over the globe. So here is a question for Ed, is all the land sinking all over the world where coastlines are being inundated? What are Mr. Griffin's views on climate engineering? That is also a very interesting narrative that is truly baffling. Apparently (according to Mr. Griffin) the grid patterns we see in the sky are just being blown into these patterns by the wind. Why would someone who claims to be in the fight against climate engineering push the exact "global warming is a hoax" false narrative that the geoengineers, big oil, and the military industrial complex want the public to believe?

So what is the bottom line in regard to the state of the climate? The planet and climate system is not just warming, both are descending into a state of total meltdown with global climate engineering programs helping to fuel the overall fire. Those who have made it their mission (for whatever reason or motive) to deny the planetary meltdown, are simply toeing the line for big oil and the geoengineers.

Here is the climate reality, the record breaking heat on our planet continues to build. Septemper 2016 was the 16th consecutive month of all time record shattering hot months. October 2016 will likely break the record yet again, but that data is not yet available. 2016 will be the hottest year ever recorded since record keeping began, breaking the record set in 2015, which broke the record set in 2014. On the top of the world, the Arctic is in a state of total meltdown (along with the rest of the planet). Even Antarctic sea ice ( the last vestige for the global cooling false narrative) is also now at record low levels. 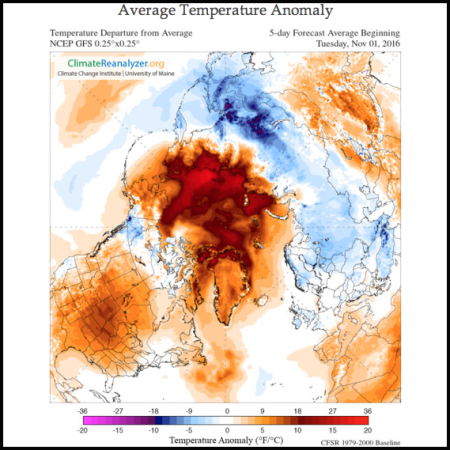 The "departure from normal high temperature" map above shows the Arctic meltdown with startling clarity. The US is also experiencing record shattering heat with no end in sight.

Ice deposits are crashing around the world. Front-line film footage of the imploding ice deposits (the cryosphere) proves this fact beyond any doubt. 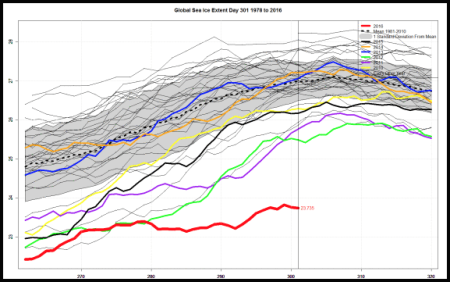 The graph above is a shocking image of the radical decline of global sea ice. And about the front-line reality, we don't need graphs, we have front-line fim footage.

What is the bottom line? There is either the truth, or there is a lie. Those that are pushing the "global warming is a hoax" false narrative are pushing an unimaginably ridiculous lie. Why does it matter? Because credibility is critical in the battle to expose and halt climate engineering. Why is stopping climate engineering so important? Because the global weather warfare assault is mathematically the greatest and most immediate threat we face short of nuclear cataclysm. When so called "independent" news sources completely discredit the anti-geoengineering cause by pushing completely false disinformation, bridges with the science community cannot be built. Such bridges are absolutely essential if we are to have any chance of fully exposing and halting the climate engineering insanity. Investigating the truth is our responsibility, as is sharing it. Make your voice heard.
DW

The extensive list of articles below is only a sample of the front-line information that is available on the state of the climate. We have a responsibility to investigate, all of us.

205 Responses to Updated, Is Global Warming “An Inconvenient Lie”? A Public Response to Ed Griffin