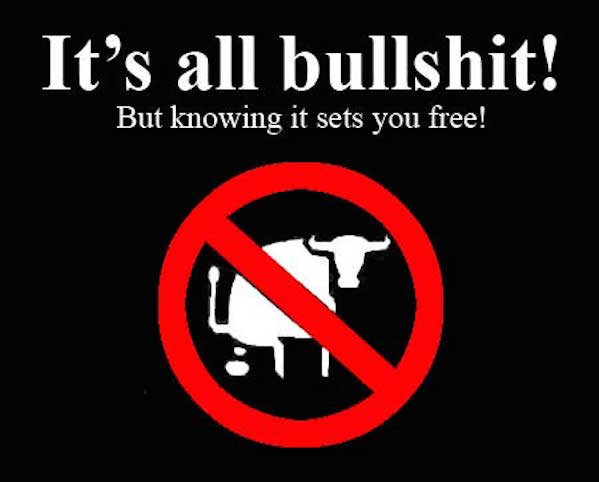 Anybody else fed up with all this crap? I can hardly believe my eyes any more it’s all so fucking contrived, shallow and meaningless. Just look for a second at the stuff going down around our planet and you’d think you were in a bad sci-fi production in some failed studio full of unconscious drooling dweebs.

We can harp all day long on the conscious awakening which is wonderful, but it doesn’t make this crap go away. At least not yet. But it’s such insane spew one can hardly believe their eyes. And if anyone swallows it, man are they in for trouble!

The cool thing is the polarization. While it’s bad news for the idiots who refuse to see the truth, yes refuse, because it’s self evident, it’s setting the awake on new projected courses they never dreamed of. And that’s even more than wonderful – as long as they don’t shirk in fear of the unknown.

But I suspect most who’ve woken up to some degree are fed up enough to try just about anything. And that’s a good thing, because the unknown is hurling towards us whether we like it or not. And it’s nothing to fear.

But for goodness sake, see things as they are! From there you can operate consciously instead of on ethereal cereal BS blindness.

Here’s a poignant example of reality breaking out from 50 years ago that’s well worth reviewing. Just think where the hell this altered civilization has gone since then at its accelerating rate of adulterated change!

Now you’re getting it.

It’s healthy as hell to get mad and fed up with this bullshit going on around us. If people don’t recognize it for what it is they’re living in a dream world – either a defensive “safe zone” of religious or belief system framework, or some kind of crapola flitty disjointed anti-reality I really don’t want to know about.

They all stink to high hell with a shallow, unnatural and unreal stench and a vibration that gives me the heebie-jeebies.

Whatever, “if you’re not mad you’re not paying attention” is so damn true. It’s sickening the grovelling most of humanity is doing, genuflecting to fake blowhards masquerading as leaders, false information peddled as fact, and toxic crap doled out as food and helpful “drugs”. It’s obscene. That’s why we better be mad as hell, or we’re not going to be fucking alive any longer!

I have a lot of love in my heart but it doesn’t contradict my indignation one fucking bit. Nor does it in any awakened soul. I’m sickened with the crap being peddled by these usurping “authorities” and talking heads – it’s disgusting. They’re all sell out slime bags who should be put down in one form or another. Humanity has suffered enough – it’s time to have some balls and exterminate the lies and liberate the captives.

That’s just how I see it. I’m obviously in a pissed off mood but it feels good and right. People need to dig up some serious guts and take things into their own hands, wisely and without violence if possible. It’s going to be hand to hand combat for their own existence soon if they don’t.

We are awakening, we are the answer, and we are powerful.

Use it, before you get used up.

And clear your head and blow the snot out – it’s accumulated poison waiting to be ejected.

11 Responses to It’s All Bullshit