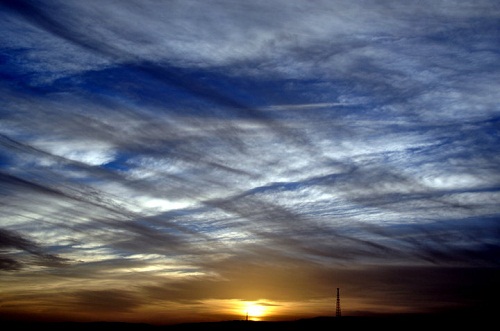 The science relating to the effects of an atmosphere saturated with particulates is clear and disturbing: less rain, wind, and sun. Numerous environmental engineering studies have found that the levels of rain, wind, and sun around the world today are likely far less than they should have been and would have been without chemical aerosols decimating our atmosphere. Such studies discuss these problems that can occur with atmospheric aerosols, however most articles, like the one cited below, ignore the “elephant in the room” that geoengineering is by far the largest single source of atmospheric aerosols. A recent report from NOAA even admits to the fact that they just don't know where all these particles are coming from. 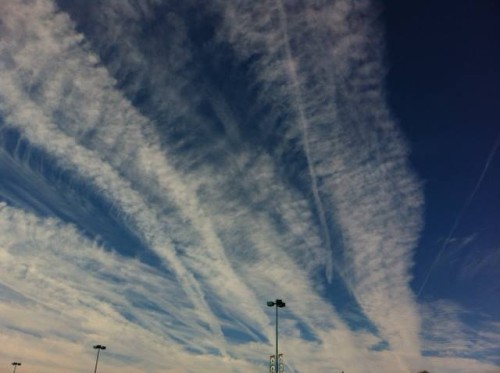 Particulates in the air prevent "condensation nuclei" (small particles 1/100th the size of a cloud droplet) from combining and eventually falling as precipitation or rain. Instead, the normal process of cloud formation does not occur and the atmospheric moisture is scattered far and wide into a rainless "artificial" aerosol cloud, leading to significantly diminished and dissipated global rainfall overall (though isolated deluges are also increasing in frequency).  The visual effect of this process often transforms the sky into a completely featureless canopy of lingering and expanding particle trails dispersed by aerosol spraying from jets. Depending on the degree of spraying intensity, the sky may also appear to be a mix of natural and artificial clouds that can be seen as an "over-story" of white, "cob web", wispy, and/or silvery sky above natural clouds. The particle trails or "trailing" can often be seen in these "partly cloudy" conditions creating a layered appearance to the sky.  Though wind can, of course, still blow under this sky laden with aerosols, available science makes clear that the wind and sun are less than otherwise would have been if the atmosphere was not completely saturated with particulates (there, of course, will always be exceptions regarding wind and rain depending on the conditions and the goals of the climate engineering in a particular circumstance).

The stated goal of numerous geoengineering patents is to saturate the atmosphere with aerosols (extremely tiny nanometer sized particles). SAG (stratospheric aerosol geoengineering) and SRM (solar radiation management) are the acronyms for the now constant aircraft spraying and dispersion so clearly visible in our skies to anyone that bothers to look up regularly. Though most are finally beginning to wonder what is wrong with the weather, very, very few have taken the time to investigate. The corporate sponsored media and its complacent politicalized weather forecasters are all too proficient at explaining away the now completely altered skies above us, the radically fluctuating temperatures, the almost never "clear" skies, and the rest of a long list of anomalous weather events increasing by the day. Skies that are often covered with stripes from horizon to horizon, with x's and other grid configurations considered to be "normal". It is important to remember that there are no absolutes in this equation. Though aerosols in the atmosphere have specific general effects, as pressure is built up in the climate system ferocious storms will also develop to release that pressure.

Any that bother to truly investigate the dire issue of geoengineering will find there is much going on in our skies that could be considered anything but normal.  In the meantime, most will unknowingly be suffering from the insidious effects of the aerosol spraying, which is silently diminishing the natural balance of nature with devastating consequences.  Welcome to Geoengineering. Though the Stanford study below of course does not admit to climate engineering as a source of atmospheric aerosols, the point of their effect is still made.
DW
geoengineeringwatch.org

The winds that blow near the surface of the Earth have two beneficial effects: They provide a renewable source of clean energy and they evaporate water, helping rain clouds to build up. But aerosolized particles created from vehicle exhaust and other contaminants can accumulate in the atmosphere and reduce the speed of winds closer to the Earth's surface, which results in less wind power available for wind-turbine electricity and also in reduced precipitation, according to a study by Stanford and NASA researchers.

"These aerosol particles are having an effect worldwide on the wind speeds over land; there's a slowing down of the wind, feeding back to the rainfall too," says civil and environmental engineering Associate Professor Mark Z. Jacobson, co-author of the study with the late Yoram J. Kaufman from NASA Goddard Space Flight Center, who died in May 2006. "We're finding a reduction of rain, and that can lead to droughts and reduction of water supply."

Jacobson and Kaufman's study, based on NASA satellite data of aerosol accumulation, measurements of wind speeds over the South Coast Basin in California and in China, and computer model simulations over California as a whole and the South Coast Basin, was published online Dec. 27 in Geophysical Research Letters. The researchers used both the model and data to study the effects of aerosol particles on wind speed and rainfall.

Aerosol particles floating in the atmosphere absorb or scatter solar radiation, and prevent it from getting to the ground. This cools the Earth's surface and reduces daytime vertical convection that mixes the slower winds found near the ground with the faster winds at higher altitudes. The overall effect is a reduction in the speed of near-surface winds, which Jacobson has calculated to be up to 8 percent slower in California.

Clean and renewable, wind power made up 1.5 percent of the Golden State's energy portfolio in 2005, according to the California Energy Commission. But slower gusts may reduce wind's economic competitiveness compared to other energy sources, such as fossil fuels.

"The more pollution, the greater the reduction of wind speed," Jacobson says. Aerosol particles may be responsible for the slowing down of winds worldwide. Wind supplies about 1 percent of global electric power, according to Jacobson. Slow winds may hinder development of wind power in China, where it's a needed alternative to dirty coal-fired plants. Aerosols' reduction of the wind also may explain the reduction in the Asian seasonal monsoon and "disappearing winds" in China, observations found in other studies. Moreover, slack air currents may hurt energy efficiency in Europe, where countries like Denmark and Germany have made major wind-power investments.

Slower winds evaporate less water from oceans, rivers and lakes. Furthermore, the cooling of the ground provoked by the aerosol particles reduces the evaporation of soil water.

What's more, the accumulation of aerosol particles in the atmosphere makes clouds last longer without releasing rain. Here's why: Atmospheric water forms deposits on naturally occurring particles, like dust, to form clouds. But if there is pollution in the atmosphere, the water has to deposit on more particles. Spread thin, the water forms smaller droplets. Smaller droplets in turn take longer to coalesce and form raindrops. In fact, rain may not ever happen, because if the clouds last longer they can end up moving to drier air zones and evaporating.

"In California, [the wind reduction] may imply a 2 to 5 percent reduction in water supply, which translates into 0.5 to 1.25 million acre feet less a year" Jacobson says. (An acre foot is the volume of water needed to cover one acre of surface area to a depth of one foot.) This contributes to water scarcity in the state, which with its growing population will require an additional 4 to 6 million acre feet of water supply by 2010, according to the Association of California Water Agencies.

In fact, Gov. Arnold Schwarzenegger recently called for new dams in Northern California and near Fresno to store more water from Sierra snowmelt—an initiative that environmentalists have vehemently criticized. Jacobson says the elimination of aerosol pollution would offset some of the need for additional dams by increasing rainwater supply.

"The aerosol pollution in California could be causing an annual loss of water supply equivalent to the storage in the planned upper San Joaquin River dam, with a capacity of 1.3 million acre feet," Jacobson says.

Jacobson advocates replacing existing motor vehicles with cleaner ones, such as renewable-energy powered battery-electric and hydrogen-fueled vehicles, and substituting contaminating power plants with networked wind farms. These actions would reduce particle emissions practically to zero, he says. The second-best option would be adding particle traps to existing vehicles and other sources of pollution.

"If we want to solve the global warming problem, we have to replace most of the existing energetic infrastructure with wind and other renewable-based energy," says Jacobson, whose next step will be to study the effect of greenhouse gases on winds.

Jacobson's research was supported by grants from NASA and the California Energy Commission and involved the use of NASA's high-end computing center at Ames Research Center in Mountain View, Calif.

22 Responses to Less Wind, Rain and Sun, Welcome to Geoengineering