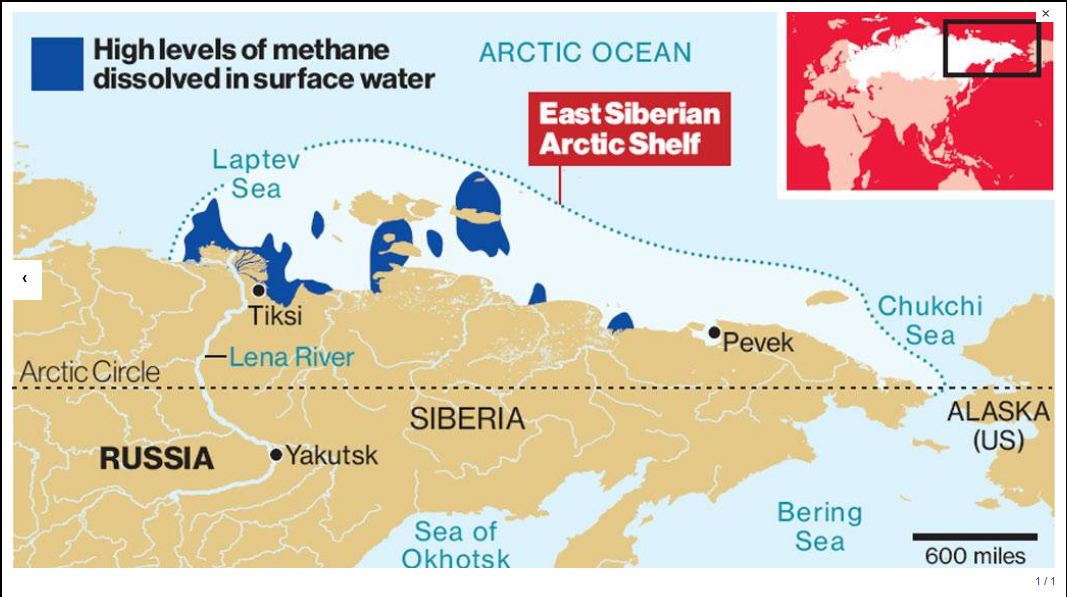 Below is some of the most recent data on the methane hydrate release that has been unleashed in the Arctic.  A point to consider is the articles mention of methane being 20 times more potent than Co2 as a greenhouse gas. This figure is only accurate over a 100 year time horizon.  The immediate situation is much worse. Methane is over 100 times more potent as a greenhouse gas over a ten year horizon.  Over a 5 year horizon, stronger still.  The methane expulsion is a global game changer on its own.  All available data indicates that this change will occur at blinding speed.  Indeed, the effects of the  methane hydrate release is already manifesting itself.  As the planet rapidly warms, this in turn will trigger more methane hydrate and clathrate releases around the globe. Events of this nature have been recorded in the past via paleoclimatic data, twice in the last 300 million years, the end of the Permian era (255 million years ago), and the Paleocene/Eocene (55 million years ago).  Both were mass extinction events.  The lethality of the methane release is not limited to the atmosphere, but extends to Earth’s oceans.  As the plumes of methane rise from the sea floor to the surface, much is absorbed into the sea water causing very destructive acidification of the ocean water.  The two previous events are believed to have caused a terrestrial extinction of over 70%, and an ocean extinction of over 90%.

Though groups of scientists like the “AMEG” group (Arctic Methane Emergency Group) are now repeatedly and frantically calling for “immediate wartime scale geoengineering”, to avert a “planetary catastrophe” clearly they are either completely in a bubble, or are providing cover for the ongoing geoengineering programs.  Data indicates that the global spraying has been going on at some level for as much as 60 years.  It would appear that this spraying is the primary cause of the Northern and Southern Hemisphere ozone holes. Clearly the spraying is the cause of the ever worsening global droughts. At this point, all available data would suggest that geoengineering is a “cure” that has only fueled things to the dire point they are now at.

The methane has been triggered, and there is no way to stop it.  Our best move at this point is to do everything possible to bring the spraying (and HAARP) to light, and to a halt.  Only then can the planet respond.  The poisoning of the air, soils and waters from the spraying would cease.  The hydrological cycle would resume.  The rain would return.  The mass die off of the boreal forests would be reversed, at least for a time. The ozone layer could begin the process of rejuvenation.

We are in uncharted water to be sure, but if the spraying continues, our fate is already carved in stone.

Dramatic and unprecedented plumes of methane – a greenhouse gas 20 times more potent than carbon dioxide – have been seen bubbling to the surface of the Arctic Ocean by scientists undertaking an extensive survey of the region.

The scale and volume of the methane release has astonished the head of the Russian research team who has been surveying the seabed of the East Siberian Arctic Shelf off northern Russia for nearly 20 years. 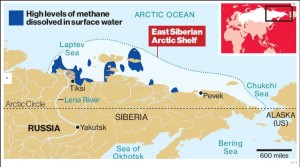 In an exclusive interview with The Independent, Igor Semiletov, of the Far Eastern branch of the Russian Academy of Sciences, said that he has never before witnessed the scale and force of the methane being released from beneath the Arctic seabed. (click on image to enlarge)

“Earlier we found torch-like structures like this but they were only tens of metres in diameter. This is the first time that we’ve found continuous, powerful and impressive seeping structures, more than 1,000 metres in diameter. It’s amazing,” Dr Semiletov said. “I was most impressed by the sheer scale and high density of the plumes. Over a relatively small area we found more than 100, but over a wider area there should be thousands of them.”

Scientists estimate that there are hundreds of millions of tonnes of methane gas locked away beneath the Arctic permafrost, which extends from the mainland into the seabed of the relatively shallow sea of the East Siberian Arctic Shelf. One of the greatest fears is that with the disappearance of the Arctic sea-ice in summer, and rapidly rising temperatures across the entire region, which are already melting the Siberian permafrost, the trapped methane could be suddenly released into the atmosphere leading to rapid and severe climate change.

Dr Semiletov’s team published a study in 2010 estimating that the methane emissions from this region were about eight million tonnes a year, but the latest expedition suggests this is a significant underestimate of the phenomenon.

In late summer, the Russian research vessel Academician Lavrentiev conducted an extensive survey of about 10,000 square miles of sea off the East Siberian coast. Scientists deployed four highly sensitive instruments, both seismic and acoustic, to monitor the “fountains” or plumes of methane bubbles rising to the sea surface from beneath the seabed.

“In a very small area, less than 10,000 square miles, we have counted more than 100 fountains, or torch-like structures, bubbling through the water column and injected directly into the atmosphere from the seabed,” Dr Semiletov said. “We carried out checks at about 115 stationary points and discovered methane fields of a fantastic scale – I think on a scale not seen before. Some plumes were a kilometre or more wide and the emissions went directly into the atmosphere – the concentration was a hundred times higher than normal.”

Dr Semiletov released his findings for the first time last week at the American Geophysical Union meeting in San Francisco.

One Response to Lethal methane gas released by ice meltdown