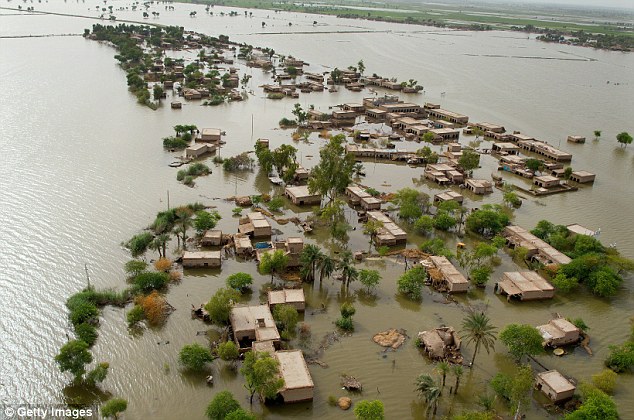 Share396
Tweet
+1
Share
Pin
396 Shares
Human civilization sprouted and flourished during an incredibly stable era in the planet's 4.5 billion year history, that era is over. Though there has always been fluctuations and natural cycles in Earth's climate, what is now occurring is anything but natural. People die, this is a part of the cycle of life, but if you shoot someone in the back of the head, they will then die an untimely death. Such is the case with our planet. In geologic terms, human activity has decimated the planet in the blink of an eye. Though there are countless sources and causes of damage to the biosphere and the climate system, the greatest single assault against the planet of all is global climate engineering. Migrations of those impacted by the disintegrating climate have begun.
Dane Wigington
geoengineeringwatch.org

Both surface water and ground water have become unusable, with the once fertile Indus river basin turning into a desert, as sea water brings sand inland as far as 50 kilometers.— World Bulletin in June of 2014

For the cities, towns and villages of Sindh Province along the Indus River in Southeast Pakistan, the seas are rising and the winter rains have failed. It is a place besieged on all sides by climate change. By forces that are killing its children due to malnutrition and turning tens of thousands of its populace into climate change refugees. 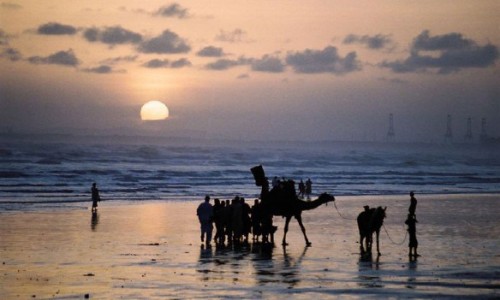 Coastal villages in Pakistan retreat ahead of rising seas.

A combination of rising temperatures and decimation of local forests due to gum extraction has exacerbated an extraordinary moisture deficit for an already arid region. In early spring of 2014, the impacts to crops resulted in scores of children dying due to malnutrition. By late fall, the famine had returned with increased intensity, resulting in the loss of nearly 300 children in less than three months. A tragic loss that may well have been avoided.

Increased aridity in the region can be blamed on a number of factors — all related to human-caused climate change. Gum extraction from Gugral trees has resulted in losses of up to 70 percent from local stands. The loss of these tens of thousands of trees has, in turn, resulted in less water retention kicking off increased aridity. Meanwhile, larger global climate change is resulting in higher temperatures over the region — increasing evaporation rates and further lowering soil moisture content. Glacier loss in the Himalayas has recently pushed a surge of added water down the Indus — which helped to boost development unsustainably. Now glacial outflows are at risk of dwindling, threatening the long-term future of the Indus itself. Finally, the increasing global heat is kicking off alterations in seasonal rain patterns — making the winter rains less reliable.

The combined factors would be difficult enough for Sindh and its cities to manage. But a final factor appears to be delivering another disruptive coup de grace. As of mid 2014, environmental reports had indicated a mass migration away from Pakistani coastal regions. 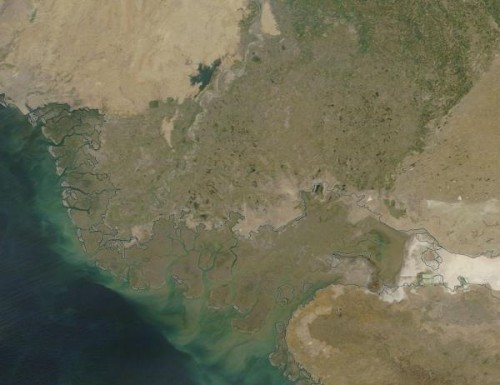 Not a cloud above the once-fertile but now increasingly salt-ridden Indus Delta on 14 January 2014.

Rising seas had resulted in increasing levels of salt water in near-coast aquifers and wetlands. The rising salt levels in soils made irrigation of coastal crops impossible in many regions. Within just a few years, the elevated seas had rendered 1 million hectares of land arid — making it impossible for farmers to grow crops or to raise animals.

According to a June 2014 report by World Bulletin:

Both surface water and ground water have become unusable, with the once fertile Indus river basin turning into a desert, as sea water brings sand inland as far as 50 kilometers.

In addition, saltwater invasions of the Indus river reduced fish stocks. This sudden loss of water useful to agriculture and precipitous fall in fish stocks suddenly put many farmers and fishermen out of work.

By mid 2014, more than 100,000 people had fled the coast. Now, these tens of thousands of jobless farmers and fishermen pack the streets of inland towns — seeking jobs and places to live that simply may not be available.

But what this litany of harsh statistics doesn’t tell is how many of the children lost came from families of those displaced by rising seas.

Sadly, this issue of river deltas losing fertility to the inexorably rising tide is not just a problem for Pakistan. Many of the worlds most productive agricultural zones lie in delta regions. At this point, all are under threat due to speeding sea level rise set off by rising rates of glacial melt. And as we have seen in Brazil, California and Pakistan this year other increasing atmospheric temperatures, climate induced weather pattern changes and deforestation (Brazil, Pakistan) also play a role.

Another Child Dies of Famine in Tharparkar Due to Malnutrition

Thousands of Trees Lost in Thar