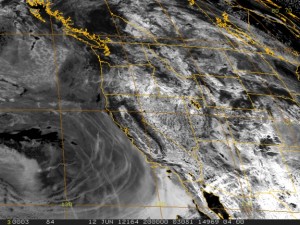 Think they have “cut back” on the spraying? Think again.

Some are wondering why there appears to be a let up in the daily spray assaults that we on the West coast are so used to. Don’t worry, they are still hard at it. This recent satellite photo makes clear what cannot be seen overhead on land.

Recently, with some exceptions, the aerosol operations seem to be experimenting with other methods of dispersing their toxic brew. If one examines the daily satellite images of the Northern Pacific, interesting things can be observed. The marine layer, which usually builds at night, now seems largely to dissipate. In the morning hours, when the “marine layer” (low level cloud formations which form over large bodies of water) generally begins to burn off, it now completely fills in the entire sky over the Northern Pacific within a very short time a few hours after sun up.  This has become the norm now and it generally stays covered till the night time hours when it again clears. This is backwards from natures norm.  This constant marine layer “enhancement” is the exact stated goal of geoengineers in countless studies and dialogs.The clearly visible trails just off the US west coast are very evident in the photo below.

Does this change of methods make the air any less toxic for those of us along the West coast? The constant silvery white hazy skies we now see would say otherwise. Just because the dumping is not occurring right overhead does not mean we are being spared from the usual assault. All that spraying “up wind” is still raining down on us all. The toxic particulate clouds are still shredding the upper layers of the atmosphere, like the ozone. The constant spraying of the entire Northern Pacific is without doubt a major factor (if not the major factor) in the all time record drought currently gripping most of the US. This correlation also applies to the rest of the planet, which is also being sprayed, and is also in record drought. An atmosphere saturated in particulates diminishes rain. Period. The science is very clear on this fact for any that take the time to investigate.
Perhaps out of sight is out of mind, but the full scale assault on the planet and all life continues. With each and every breath, we are all breathing what they are spraying

6 Responses to Massive Chemical Spraying Of The North Pacific