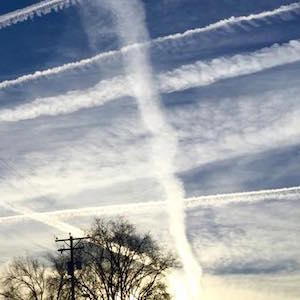 Suburbanization and industrial deforestation are decimating the world’s trees, and there are only 2 intact giant forests remaining on planet earth. However, across the globe, some other phenomenon is causing standing trees to wither and die in record numbers, and at present, the problem is receiving considerable mention in California, where millions of trees are dying during the worst drought the region has seen in perhaps some 1200 years.

“We are seeing major tree die off everywhere in N. CA. On my property I’ve seen walnut, apple, cherry, mimosa, olive and pine trees die off in the past three months alone. I’m up in Tahoe and it’s the same with the mountain pines and my friends in Marin are seeing bay trees die off in strands.” – California farmer, Jamie Lee

The U.S. Forest Service attributes the majority of California’s dying trees to the intensifying drought, noting that too many consecutive years of dry conditions weakens a trees defenses against diseases, fungi, and insects such as the pine beetle. The drought is generally blamed on global climate change, which can mean a number of things, and heat waves around the world are intensifying and lasting longer. NASA has even reported that rainfall is severely down world wide.

However, in areas of California less-affected by the drought such as the Boreal forest of the northern central valley of California, it’s not just trees that are withering away, but shrubs, bushes and plants are also dying in shocking quantities. These native trees and plants should be able to withstand current conditions, but they are losing foliage, thinning out, dropping needles, dropping branches, and dying. This, in one of the most shaded and wettest areas of California.

In California and in other parts of the world, many are making the connection between climate engineering these tree die-offs. Also known as geoengineering, this is the modification of the earth’s atmosphere with the supplementation of compounds and chemicals, ostensibly as a means of favorably influencing the climate.

One of the most significant means of climate engineering is the high altitude spraying of aerosol compounds into the earth’s atmosphere, most notably aluminum, barium and other heavy metals. These compounds eventually end up on the ground and in the water, causing changes in soil pH and composition, and generally poisoning the earth below. The slowly kills the entire ecosystem as insects and animals are left without food or habitat.

Investigative journalist Dane Wigington of has been researching this phenomenon in great depth for many years and is the author of GeonengineeringWatch.org, an ongoing global investigation into climate engineering. He briefly explains the serious nature of geoengineering here:

“Global geoengineering is completely disrupting the hydrological cycle, destroying the ozone layer (which is exposing all life on Earth to extreme UV radiation), and contaminating the entire surface of the planet with highly toxic bioavailable heavy metals and chemicals. Massive levels of radio frequency transmissions directly related to climate engineering are yet another layer of destruction which is radically affecting the trees, us, and the biosphere as a whole. It is imperative to wake the masses to our common plight.” – Dane Wigington

​On a tour of property in northern California, he examines a number of native species of plants and trees that are in dire health, pointing out their condition and it’s relation to the documented and globally observed phenomenon associated with geoengineering:

Reports of widespread die-offs of trees and other plants are coming in from around the world, not just California. Last summer in the North Eastern U.S., popular video blogger ‘thebossoftheswamp‘ walked us through sections of the forest in that region where many plants and trees appear to be dying as if poisoned by toxic rain. Many other reports of unexplainable tree deaths are easily found online, so what is it that is causing such devastation of trees?