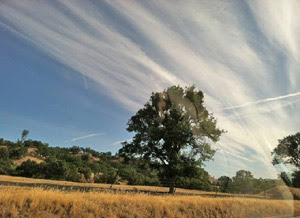 Some North State residents are curious about the nature of certain streaky, white, cloud-like formations such as the perpendicular ones pictured at left, and “dripping” streaks like the one pictured below.

Geoengineering defined:
In Climate Change Science and Policy, Harvard scientist David W. Keith delineates geoengineering as “intentional, large-scale manipulation of the environment” in which “change must be the goal rather than a side effect.” Size and purpose separate geoengineering from other activities; Keith contrasts it with ornamental gardening (too small a scale) and pollution (a side effect, not an intended effect).

Have you ever looked up, or out on the horizon, and seen streaks of white across the sky? They have the cottony appearance of clouds, yet are too narrow and too symmetrical for a natural occurrence. They resemble contrails—streams of condensation following the flight paths of jet planes—but often appear in large numbers, and in lines that are perpendicular to each other.

Just what are those things, anyway?

Patricia Kenyon has been wondering the same thing, particularly for the past year and a half, ever since an engineer friend came to dinner and talked about chemtrails: that is, the aerial spraying of metallic particles designed to deflect solar radiation. Such a barrier could serve as a means for offsetting some of the warming effects of carbon-dioxide emissions.

Intrigued, and more mindful of the sky above her Tehama County home, Kenyon followed her friend’s lead. She discussed the topic with friends as well as fellow teachers at Bend Elementary School. She began researching an area of science known as geoengineering, which encompasses attempts to adjust natural conditions through systematic human endeavors, including aerial spraying.

She’s found plenty of material on the subject: documents, articles, photos and videos. Many are posted online by Geoengineering Watch, whose site (www.geoengineeringwatch.org) has logged more than 10 million visitors. The group’s lead researcher, North State resident Dane Wigington—a former employee of Bechtel Power Corporation—examines what he calls “weather modification on a global scale”—“the aerosol spraying from geongineering blocking some 20 percent of the sun or more, not to mention jet-stream manipulation … and artificially/ chemically nucleated snow storms.”

In a recorded presentation embedded on the home page, he says: “The dispute as to whether or not these programs are going on is really a moot point. We have more than enough data—we have actual footage—to show that tankers are indeed spraying at altitude. The materials we see showing up on the ground are the exact materials named in numerous geoengineering patents.”

Geoengineering Watch lists, and links to, more than 100 such patents. One (#5003186, to Hughes Aircraft), involves “a method for reduction of global warming” via “seeding of the atmosphere with metallic particles” such as “aluminum oxide.” The same site offers a MtShastaNews.com article that states, “Since May 2008, over 40 [rainwater] samples have been collected [in the Mount Shasta area], with the majority showing high levels of aluminum.”

Most compelling to Kenyon is what she and her husband, a veteran law-enforcement officer, have witnessed themselves. Using binoculars, they’ve seen white planes, with no identifying marks, spraying white trails above the North State. 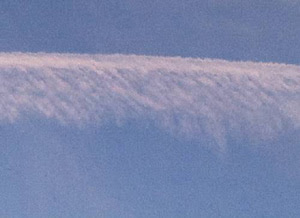 “Through the last year, we have been watching on a regular basis how often the spraying has occurred, and it’s pretty regular in the North State—it’s probably every week, sometimes multiple times during the week—and it saturates the area for 24 hours or longer,” Kenyon said in a recent phone interview. “Only if we get a really strong wind does it dissipate.”

What exactly is in what she believes is a chemical spray, she does not know. Though she worked as a respiratory therapist before switching to elementary education 15 years ago, Kenyon is not a scientist.

Nor is she a conspiracy theorist with a pat explanation. She’s a curious 50-something—teacher, farmer, wife and mother—who values transparency. That’s why she’s been an activist for labeling foods that contain genetically modified organisms. It’s also why she just can’t overlook what she keeps seeing.

“There are more sinister ideas [about geoengineering] coming from some areas and people—which it could be,” Kenyon said in a recent phone interview. “The reality is we don’t know.

“The difference with this and GMOs is genetically modified organisms are something we can choose to purchase or not purchase; we can choose to grow them or not grow them. We can’t control what’s coming from above, and that’s frustrating.”

The concept of geoengineering is hardly new. In just one example, back in 1953, the Pacific Gas and Electric Company began seeding clouds to impact precipitation, including an experiment at Lake Almanor in the 1960s. (According to a 1969 article in the Journal of Applied Meteorology, PG&E put silver iodide in the air around the Almanor watershed and measured the effect on snow and rainfall.)

Climate Change Science and Policy, a textbook by the late author Stephen Schneider—an environmental-studies heavyweight who, among other things, was co-director at the Center for Environment Science and Policy of Stanford University’s Freeman Spogli Institute for International Studies—says the Johnson administration in 1965 considered “suggestions that climate control using aerosols be used to offset the effects of rising CO2 concentrations,” and in 1992 the U.S. National Academy of Sciences analyzed “the cost of injecting aerosols into the stratosphere.”

According to the book, the NAS put the minimum price-tag at $100 billion a year for a 1 percent reduction in solar radiation in the lower atmosphere; “[w]hile this cost may sound high, it is roughly a factor of 10 lower than the cost to achieve an equivalent reduction in climate change through reductions in CO2 emissions.”

In other words, it’s cheaper to deflect sunlight than to change carbon-fuel consumption.

The Intergovernmental Panel on Climate Change assessed solar radiation management in its well-publicized 2013 report. Its determination: “If SRM were terminated for any reason, there is high confidence that global surface temperatures would rise very rapidly” with an acknowledgement that “SRM methods carry side effects and long-term consequences on a global scale.”

One of those side effects/consequences could be decreased rainfall, as has occurred in the North State (see “A dry spell,” Newslines, Nov. 21). The National Center for Atmospheric Research, in an article titled “Geoengineering the Climate Could Reduce Vital Rains,” predicts a 4.5 percent decrease in average precipitation worldwide, yet “monsoonal rains” in specific regions.

In “Chemtrails: A Planetary Catastrophe Created by Geoengineering,” the Center for Research on Globalization makes a strong case that geoengineering is not just theoretical science. It displays chemtrail photos from around the world, breaks down the chemical composition of sprays and assesses impacts.

Yet, relative to other environmental issues, geoengineering receives little attention.

“If this is happening because global warming is that big a concern, then we need to be making changes,” Kenyon said. “We need a conversation and we need answers, but the questions aren’t being asked [in a public forum, locally].”

One Response to Mystery Overhead