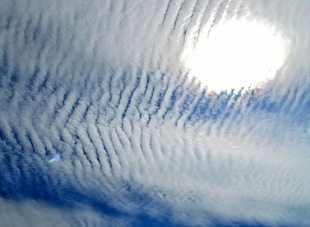 The entire premise of "solar radiation management" (SRM, a form of geoengineering) is to create artificial cloud cover by spraying reflective aerosols into the atmosphere. This incredibly insane tunnel visioned "human intervention" approach to cooling planet Earth is so packed with pitfalls that they are impossible to quantify. But what is the bottom line? Covering the planet with artificial aerosol cloud cover contributes to the overall warming of the planet. Why would this be a surprise? The same materials that deflect some of the sun's incoming thermal energy also traps heat.

This is the tip of the known negative climate engineering effects. The ozone layer is being shredded, the hydrological cycle has been completely derailed, and the entire planet has now been heavily contaminated, this is what climate engineering has given us. The planet's energy balance has long since been completely disrupted. Earth is currently warming at the rate of 4 Hiroshima bombs PER SECOND. There are countless sources of anthropogenic activity (human caused) contributing to the rapid warming of our planet. Though climate engineers can create short term (highly toxic) cooling over large regions, it comes at the cost of a worsened overall warming. This is the conclusion dictated by all available data and this has always been the conclusion of my posted materials on geoengineeringwatch.org and elsewhere. Though the article below does not directly address climate engineering and the massive global aerosol cloud cover it is producing, the inference is clear enough. This new study further confirms our long standing conclusions, solar radiation management is making an already bad climate and environmental situation far worse, not better.
Dane Wigington
geoengineeringwatch.org

For decades, science has been unable to nail down how clouds might change with human warming of the climate. Sure, we knew that added water vapor through a heating-increased amplification of the rate of evaporation and precipitation would likely impact cloud formation. But how would those physical alterations impact climate? Would an added darkening of the Earth through increased cloud cover provide a cooling effect and slow down the rate of human-caused warming (also called a negative feedback)? Or would the added water vapor aloft, itself a powerful greenhouse gas, provide an extra boost to the human heating engine (also called an amplifying feedback)?

The mainstream climate models thus assumed a zero to slightly positive heat feedback from clouds and relied on decadal verification runs to help test for accuracy. A kind of backwards checking that excluded values from clouds due to a lack of needed information. 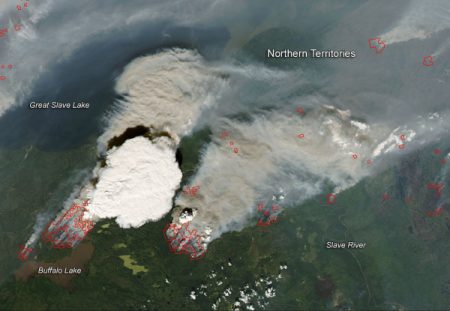 (From the global climate change perspective, some clouds are worse than others. The above image shows a thunderstorm set off by massive wildfires blazing through the permafrost zone near Great Slave Lake on August 5 of 2014. A pyrocumulonimbus cloud or, colloquially, a fire thunderstorm. Image source: NASA.)

It was an uncertainty hanging in the very air above us. An uncertainty many climate confusionists used to sow doubt over a broad range of issues involving how sensitive the Earth is to the human heat forcing. They often argued, through this scientific dim spot, that climate sensitivity was, indeed, quite low and that we had very little to be concerned about regarding an immense dumping of heat trapping gasses into the atmosphere that is now at least 6 times faster than at any time in the deep history of life on Earth.

The shady clouds, in other words, would save us from ourselves.

Not so fast, said Dr. Andrew Dressler who in this paper and this paper recently defended consensus climate science from the cloudy claims of confusionists. Dressler, like mainstream climate science, assumed at least a small degree of positive feedback from changes to clouds and atmospheric water vapor loading. And his observational findings were consistent with an equilibrium climate sensitivity (ECS), or a one century rate of warming, in the range of 2.0 to 4.5 degrees Celsius for each doubling of CO2 (consistent with a multi-century warming [ESS] in the range of 4 to 9 C for each doubling of CO2 — or about a 6 C average).

New Study Finds Changes to Clouds are an Amplifying Feedback

But now, a new study has found that the picture is not quite so rosy as some claimed. The study, led by Dr. Kevin Trenberth, found that net changes to clouds and related additions of water vapor to the upper atmosphere is a positive or amplifying feedback to human caused warming. In other words, the way human heat alters clouds and the related hydrological cycle results in yet more heat being trapped by the Earth System.

This confirms Dr. Dressler’s work and raises a rather unpleasant question — if we have an added heat feedback from clouds under a regime of Earth Systems warming, then how strong is it?

Trenberth notes in an interview published today in The Guardian:

What we do find is that if one looks at tropospheric average temperature rather than surface temperature, then there is a much stronger relationship with energy flow at the top of the Earth’s atmosphere. We are able to find a water vapor signal that is clearly a positive feedback.

Climate Sensitivity Needle May Tilt Toward Upper Range of Estimates

This is somewhat unhappy news.

What it means is that the Earth System is at least as sensitive as climate models suggest. But, even worse, there is a chance that the Earth System may be closer to the upper range of climate sensitivity estimates. It means that accumulation of heat in the atmosphere, in glaciers and in the ocean may happen somewhat faster than consensus models predict and that geophysical changes may, consequently, be greater and more catastrophic.

Whether model simulation of climate sensitivity will need to be altered has not, as yet, been determined. The study is now very new and it will take some time for the more recent data to wash out in the model projections.

But what can be plainly stated is that fossil fuel industry funded voices of false comfort have again been proven dreadfully wrong and that there is some risk that the situation may be even more dangerous than current science anticipates. As such, there is absolutely no reason for further delays in policy action and a very rapid draw-down to zero human carbon emissions.

Changes in Water Vapor and Clouds are Amplifying Global Warming

Clouds and The Earth’s Energy Budget