No Bees, No Food, No People 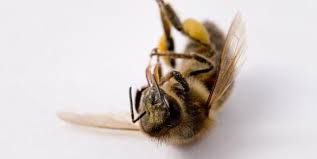 It has been said after the bees are gone, humans will follow. Bees are dying around the globe. Though the scientific community is grabbing at straws trying to find the reason, the “elephant in the room” that is global climate engineering continues to wreak death and destruction across the planet. Farm pesticides were one scapegoat for the bee die off. Certainly such chemicals are part of the problem, but only a part. If this was the real source of the die off, why are the bees just as dead a thousand miles into the wilderness as they are near the farms? The article below seems to put all the blame on climate change, but this is also a “half truth”. The toxic fall out from geoengineering is blanketing the entire globe with bioavailable nano particles which is radically affecting all life forms. Now lets add the constant bombardment of radio frequency transmissions from too many sources to list, the most powerful of which are directly related to the weather modification. All roads, in one way or another, lead back to the decimation caused by the climate engineering insanity.

Climate change will exacerbate the risk of extinction for bees and other pollinating insects already under threat from pesticides and habitat loss, experts say

Bees essential to pollinate British crops face increased risk of extinction because of climate change, a major UN report is expected to warn.

Changes to habitats and to behaviour of different species as a result of warmer weather will exacerbate the danger to bee species already facing numerous other threats, according to scientists.

Some species could face extinction while declining numbers would harm harvests of British crops such as apples, raising fears from businesses such as cider-makers that their livelihoods could be at risk.

Bees pollinate more than £1 billion worth of crops in the UK each year including fruits and vegetables such as carrots, cabbages, apples and pears.

In a vast and wide-ranging report on the likely global impacts of climate change, the Intergovernmental Panel on Climate Change (IPCC) is expected to warn that rising global temperatures are having severe negative impacts on bees, butterflies and other pollinating insects and could result in more species extinctions.

Leaked draft copies of the report say: “Climate change, after land-use changes, can be regarded as the second most relevant factor responsible for the decline of pollinators.”

It cites research by scientist Simon Potts, Professor of Biodiversity and Ecosystem Services at Reading University.

“Under climate change you would expect habitats that bees and pollinators use will shift – but the bees may or may not be able to move; there may be no connection between the habitat they have now and the new area,” he said.

As a result of climate change, bees were also “emerging earlier and earlier” in the year.

“Both the bees and flowering plants are shifting because of climate but, on average, the UK flowers are getting earlier by 4 or 5 days each decade whereas the bees we have looked at are becoming earlier by 7-10 days per decade. So we are worried that bees are starting their activity before any of their flowing plants are available.”

He said: “There is definitely an increased risk of extinction. If these things are already vulnerable and climate is increasingly putting pressure on them, it is going to tip them over the edge so we will get local extinctions.”

Professor Potts added: “Climate change is a juggernaut and we are not going to be able to slow it down in the next 10 or 20 years, so we need to do something much more quickly: providing good quality habitats for bees and trying to reduce other pressures on them such as habitat loss and the impact of pesticides.”

Wild bees, which are particularly important for crop pollination and improve the flavour and quality of fruit like apples may be more vulnerable to the impacts of climate change than honey bees, according to experts. Bumblebees are also thought to be particularly vulnerable.

Cider-makers are backing calls for action and are looking at ways they can “protect and revive bees and other pollinating insects”, Simon Russell, spokesman for the National Association of Cider Makers said.

“Bees and other pollinating insects are especially important to growers and cider-makers. Without them, blossom is a pointless exercise and we don’t get a harvest. Cider-makers and growers are studying quite seriously issues of climate change.”

Environmental campaigners Friends of the Earth are calling for the government to take action to help boost bees’ resilience to climate change by strengthening a “National Pollinator Strategy” currently being consulted on by the Department of Environment, Food and Rural Affairs (Defra).

Friends of the Earth nature campaigner Sandra Bell said: “This report is another stark warning about the impacts of climate change, which threatens to wipe out more bee species, affecting our ability to produce food.

“British orchards, recently hit by floods, could be particularly vulnerable to further declines in bee populations.

“Urgent action is needed to tackle climate change but the Government must also help bees and other wildlife adapt to changes already happening.

“That means reducing other stresses by ensuring bees have plentiful and varied food sources and helping farmers reduce their reliance on chemical pesticides.

“The National Pollinator Strategy currently being consulted on must be strong enough to help our bees survive in a changing climate.”

A spokesman for Defra said: “We take the issue of bee health very seriously. The draft National Pollinator Strategy is currently out for consultation and we urge people and groups to respond.

4 Responses to No Bees, No Food, No People