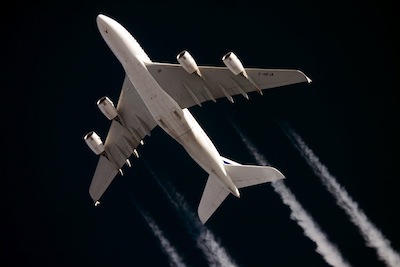 Those that believe the US Department of Defense would ask for the public’s permission before they would interfere with the climate should wake up to reality. Take a good look at the satellite photo below. You don’t need to know much about meteorology to see what looks like giant paint brush strokes through the image from just off the California coast all the way through the western states into Canada. This effect is due to massive aerosol spraying of the incoming storm front, once again robbing California of desperately needed precipitation. 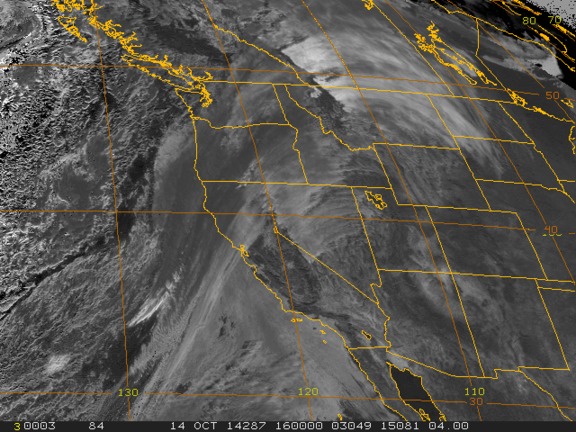 Though considerable moisture passed over Northern California all day on October 14th, 2014, not a drop has fallen as of the penning of this article. The first waves of moisture from the incoming front were completely migrated over the parched state by massive aerosol spraying over the tops of the clouds. From below, the cloud cover is largely featureless when the aerosol spraying is the heaviest. The spraying effectively melts the cloud  cover together into a blended canopy of toxic aerosols and natural clouds. The rainless aerosolized clouds then migrate inland for hundreds or thousands of miles. This is the goal of solar radiation management, to create massive areas of cloud cover to block the sun. This greatly diminishes rain from falling where it would have and causes it to migrate further where it may eventually come down somewhere else in a deluge. So where does the US military fit into this equation? As the ongoing global climate engineering becomes impossible to hide, the military is beginning to admit they are indeed focused on the climate as a primary threat to US national security. In reality, the military is using climate engineering as a weapon against populations around the globe, this includes the US.
Dane Wigington
geoengineeringwatch.org 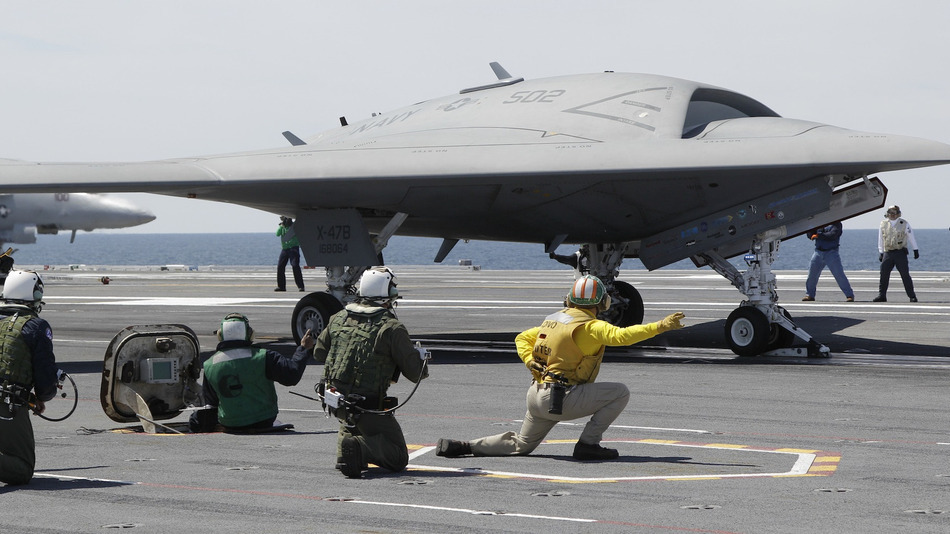 A Navy X-47B drone is launched off the nuclear powered aircraft carrier USS George H. W. Bush off the coast of Virginia, on May 14, 2013. The Pentagon is taking global warming into account in new weapons acquisition.

The Defense Department sees global warming as a challenge that “poses immediate risks” to national security, rather than one that will rear its head only in the future.

This shift in thinking comes as the sprawling department puts in place a wide range of measures to ensure that its bases do not sink below the sea as the oceans rise, that its weapons systems still work in a variety of extreme weather conditions, and that it is prepared to deal with increased demands for humanitarian assistance and regional instability.

“The loss of glaciers will strain water supplies in several areas of our hemisphere,” Hagel said. “Destruction and devastation from hurricanes can sow the seeds for instability. Droughts and crop failures can leave millions of people without any lifeline, and trigger waves of mass migration.”

We have already seen these events unfold in other regions of the world, and there are worrying signs that climate change will create serious risks to stability in our own hemisphere. Two of the worst droughts in the Americas have occurred in the past ten years … droughts that used to occur once a century.

The roadmap outlines the many ways in which climate change is already affecting the U.S. military, from increased flooding at the massive Navy and Air Force bases in the Hampton Roads, Virginia, area to melting permafrost underneath military training grounds in Alaska. 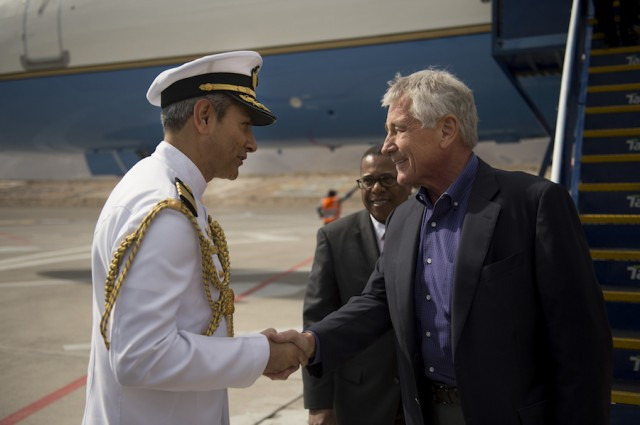 Secretary of Defense Chuck Hagel is greeted by a Peruvian military official as he arrives in Arequipa, Peru to attend the 11th Conference of the Defense Ministers of the Americas Oct. 12, 2014.

The military is completing a survey to assess the vulnerability of more than 7,000 military bases and other facilities, including more rigorous studies of bases that are considered to be at high risk from sea level rise. In the Hampton Roads area, for example, sea level is expected to rise by at least 1.5 feet by 2050, making storm surge flooding far more routine and damaging.

An analysis by the science research and journalism organization Climate Central found that, in the Hampton Roads area, there is a 100% likelihood of a flood reaching or exceeding five feet above the high tide line by 2070. This scenario would put nearly half of Joint Base Langley-Eustis under water. That base is home to a squadron of expensive F-22 fighter jets.

According to the group’s report, sea level rise along coastal Virginia could amount to between four and nearly five feet by 2100. 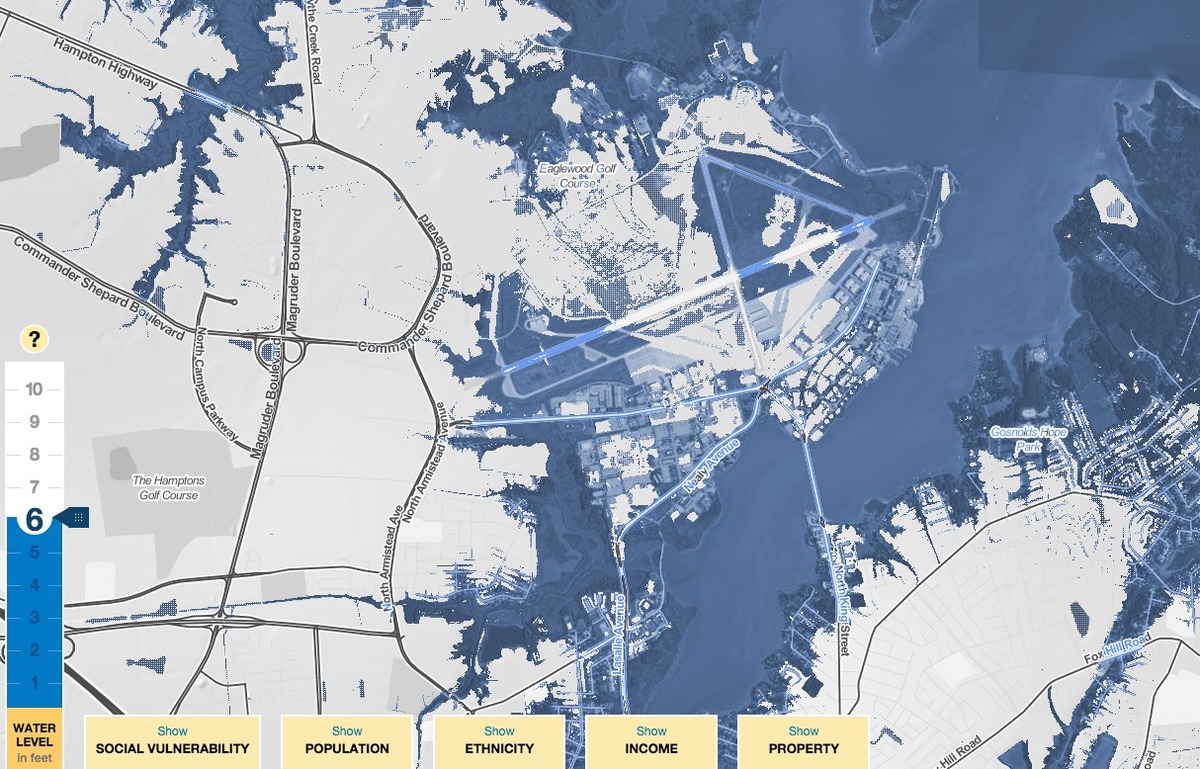 Projection for sea level rise of six feet above sea level at Joint Base Langley-Eustis in Virginia.

“In our defense strategy, we refer to climate change as a ‘threat multiplier’ because it has the potential to exacerbate many of the challenges we are dealing with today — from infectious disease to terrorism.

We are already beginning to see some of these impacts,”

We are already beginning to see some of these impacts,” Hagel wrote in the forward to the report, which was also published as a blog post on the White House website. “A changing climate will have real impacts on our military and the way it executes its missions.”

In the report, Hagel references the political controversy surrounding climate science, with many Republicans in Congress who don’t recognize the basic scientific link between manmade greenhouse gas emissions and global warming. “Politics or ideology must not get in the way of sound planning,” he says.

Our armed forces must prepare for a future with a wide spectrum of possible threats, weighing risks and probabilities to ensure that we will continue to keep our country secure. By taking a proactive, flexible approach to assessment, analysis and adaptation, the Defense Department will keep pace with a changing climate, minimize its impacts on our missions, and continue to protect our national security.

Many of the vulnerabilities discussed in the roadmap have been known for some time, since reports such as the Quadrennial Defense Review have addressed climate change’s potential impacts on military operations and readiness before.

What is unique in this report, however, is that it represents a tactical shift for the Pentagon, away from a long-term planning perspective on climate change, and toward one that also recognizes that climate change impacts, from extreme weather events like heat waves to sea level rise, are already affecting military readiness and mission demands.

While the military has long considered climate change to be a “threat multiplier” that is likely to drag the U.S. into a greater number of rapid humanitarian relief operations and weaken already fragile governments, the new report indicates that the Pentagon is also concerned about its impacts on the readiness of U.S. forces and changing requirements for new and expensive weapons systems.

The roadmap even notes the possibility that climate change, by altering the distribution of freshwater resources around the world, could make it more difficult for the military to ensure its personnel have adequate food and water, both in times of peace and war.

Although scientists have not yet firmly established a climate change connection to the ongoing California drought, it has already affected military training operations by increasing the number of high fire risk days, as well as excessive heat days, at military bases in the state. California is having its warmest year on record so far, after having its driest year.

Hagel’s speech also looked forward to the next round of U.N.-sponsored climate treaty talks, which will take place in Lima, Peru in December. “Defense leaders must be part of this global discussion,” Hagel said.

In an interview with Mashable on October 9, Manuel Pulgar-Vidal, Peru’s environment minister and the president of the upcoming climate talks, said a key goal of the negotiations will be to emerge with a draft global climate agreement. Without that, he said, “we are going to create a lot of frustration.”

The Lima talks will be followed by a high stakes round of negotiations in Paris in 2015, at which time a new treaty is supposed to be signed and slated to go into effect by 2020.