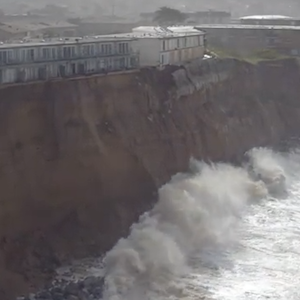 The current condition of the the climate and Earth's life support systems is not as bad as we have been told, it is unimaginably worse. Global climate engineering is the epitome of anthropogenic damage to our planet. Geoengineering programs are further fueling the biosphere implosion in what is already a runaway scenario. If we continue on the current course, "Venus Syndrom" will likely be the final destination.  We are not just facing climate change, we are facing what is more correctly termed as an "abrupt climate shift" which science makes clear is anthropogenic in nature. Climate engineering/solar radiation management programs are pushing the planet past any point of possible recovery. The record shattering heat in 2015 (breaking the record global heat just set in 2014) is compounding the rate of ice deposit melting around the globe. This in turn is pushing rapidly accelerating sea level rise which is now estimated to be happening at 10 times the rate previously predicted. 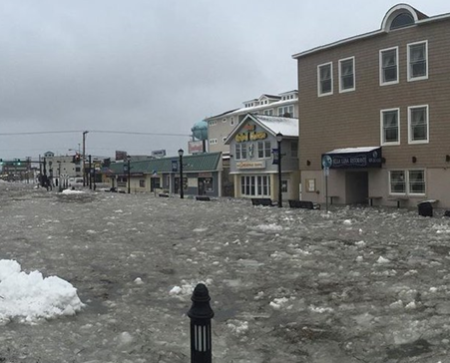 Sea level can mount due to two factors – melting ice and the thermal expansion of water as it warms.

The findings in the Proceedings of the National Academy of Sciences, a peer-reviewed US journal, suggest that increasingly severe storm surges could be anticipated as a result.

The 6 minute video below of expensive apartments in Pacifica, California, is a glimpse of what is to come on coastlines around the world.

In the decades to come, thousands more from along America's most fragile shorelines will embark on a great migration inland as their homes disappear beneath the water's surface. Over the last 10 years, the Isle de Jean Charles community in Louisiana has lost two-thirds of its residents to dislocation. In the Chesapeake Bay, Tangier Island's shoreline recedes by about 14 feet a year. On Washington's Olympic Peninsula, the Quinault Indian Nation relies on a 2,000-foot-long sea wall for protection until it can complete its move uphill.

In the attempt to continue masking the true severity of climate disintegration, the geoengineers are carrying out ever more desperate weather events. "Winter Storm Jonas" was a stunning example of this desperation. 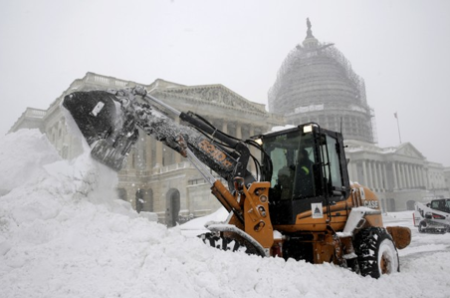 Disaster cleanup at the taxpayers expense after "Winter Storm Jonas"

“It is anticipated that this will be the first billion-dollar weather event of 2016 for the United States,” the re-insurer said in a statement. “Given the physical damage to homes, businesses and other structures and automobiles, plus the high costs incurred due to business interruption, it is expected that this will end up being a multi-billion-dollar economic cost.”

The global power structure now controls most of academia and nearly all of the media. These completely subjugated institutions have repeatedly tried to tell the public that we should expect more severe "winter storms"  because of global warming. But is this counterintuitive conclusion that is pushed on us really backed up by the most recent science studies? The short answer is NO.

Climate change does not cause extreme winters, new study shows

Cold snaps like the ones that hit the eastern United States in the past winters are not a consequence of climate change. Scientists at ETH Zurich and the California Institute of Technology have shown that global warming actually tends to reduce temperature variability.

The climate engineers are chemically nucleating every bit of moisture they can (causing weather whiplash) in their increasingly desperate attempt to temporarily (and toxically) lower the temperatures on the ground. Engineered snowstorms keep the confusion and division going in regard to the populations perception of the climate.

How else is climate engineering costing the planet and its inhabitants? Geoengineering is causing drought and fueling fires. On a warming planet, the laws of physics state there must be much more overall rainfall, not less (the atmosphere holds 7% more moisture for every degree centigrade of warming). Solar radiation management programs (and the global dimming scenario the atmospheric spraying causes) are pushing protracted drought all over the globe. 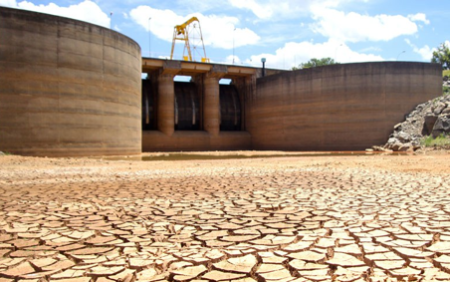 Sau Palo, Brazil is one of countless locations around the world that is going dry

From the Amazon to the Nile to the Mekong, rivers are a lifeblood for many nations, filling taps and irrigation canals and generating hydroelectricity that is powering economic development. But a new study warns that changes to river flows caused by climate change threaten that. Thousands of hydrodams risk being left high and dry by mid-century as global warming takes hold.

The findings are stark… “climate change will reduce the existing power capacities of hydropower in most regions worldwide”. Up to 74% of current hydrodams will likely see reductions in useable electricity-generating capacity by mid-century.

River water is the little-noticed essential for much of our energy supply. As the climate changes, that looks increasingly like a problem.

Though mainstream science sources cite "air pollution" as a cause of drought, such sources have not yet admitted to the atmospheric particulate spraying.

How are things going in the Arctic?

The geoengineers have been busy in the Arctic for a very long time, the artificial cloud creating solar radiation management programs are truly taking their toll. Recent studies now prove that constant cloud cover is rapidly speeding up the Greenland ice melt (also contributing greatly to the accelerating sea level rise), though, yet again, researchers are sill unwilling to admit to the ongoing geoengineering reality.

The more the climate system and the biosphere breaks down, the more the climate engineers ramp up their planetary assault in the destructive attempt to mask the damage already done (while at the same time inflicting far greater damage in the process). Exposing and stopping geoengineering/weather warfare must be our top priority if we are to salvage what is yet left of the planet's life support systems.
DW