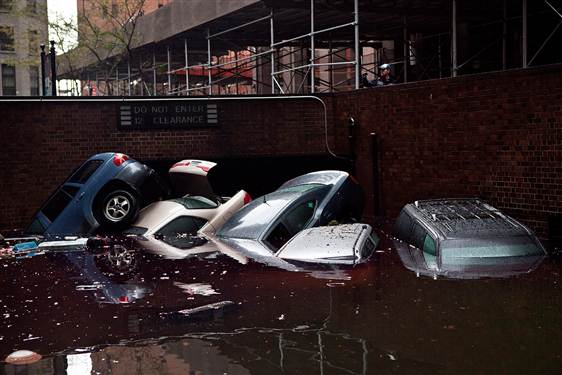 To put this in perspective
Our previous posts clearly show that this storm was geoengineered. The reality that geoengineering is taking place can no longer be ignored. Silence by the main stream media and denials by geoengineers can no longer be accepted as reality in the face of hard evidence and the unfolding of these horrific events.

The sweep of devastation from Superstorm Sandy became heartbreakingly clear Tuesday: At least 46 people are dead, and authorities face the unimaginable task of restoring power and transit for millions of others.

“We have not seen damage like this in a generation,” New York Gov. Andrew Cuomo, assessing the scope of a hurricane that swept homes into the ocean, flooded large swaths of coastal areas, left millions of people without power and crippled transportation, told NBC News.

The storm, New York City Mayor Michael Bloomberg said, was proof that “nature is an awful lot more powerful than we are.”

Sandy by the numbers

President Barack Obama declared major disasters in New York City, New Jersey and Connecticut, promising that the federal government would do all it could to help local authorities cope with damage. The president was scheduled to visit damaged areas in New Jersey on Wednesday, the White House said.

Details of the devastation became clearer late Tuesday after authorities made their way through severely damaged areas across 20 states stretching from New England to Tennessee:

“We have, probably, about 20,000 people that still remain in their homes, and we’re trying to put together an evacuation plan, get the equipment here,” Zimmer told MSNBC TV.

Zimmer said the city’s elecric utility vehicles were too big to make it down many of the flooded streets. After “begging and pleading” for equipment, she said, the National Guard told her Tuesday night some could arrive Wednesday morning.

In Breezy Point, a seaside community in Queens, N.Y., a massive fire of undetermined origin destroyed at least 110 homes and damaged 20 others . Firefighters had difficulty reaching the blaze because of the severe weather.

“To describe it as looking like pictures we’ve seen of the end of World War II is not overstating it,” Bloomberg said. “The area was completely leveled. Chimneys and foundations were all that was left of many of these homes.”

It remained impossible to put a dollar value on Sandy’s destruction. Insured losses alone will run from $7 billion to $15 billion, according to an estimate published late Tuesday by AIR Worldwide, a catastrophe modeling firm.

“I think the losses will be almost incalculable,” Christie said on NBC’s TODAY show.

Get live coverage on the storm from Weather.com

About 90,000 customers were without power Tuesday in the Canadian provinces of Ontario and Quebec, the Energy Ministry said. At least one death was reported in Toronto after a woman in her 50s was hit in the head by a sign Monday night, NBC News Channel reported.

Sandy hit the mountains of West Virginia and North Carolina with full-blown blizzards, part of a storm-generated snow system stretching as far west as Kentucky and Ohio, where several inches of snow fell in Champaign County.

Officials said the 14 to 16 inches that blanketed Newfound Gap, on the Tennessee-North Carolina line, was believed to be biggest October snowfall on record. Parts of eastern Virginia were under a blizzard warning through Wednesday morning, with snowfall at 1 to 2 inches an hour expected.

‘The worst that we have ever experienced’Tuesday’s disaster declarations for New York City, New Jersey and Connecticut mean federal funds will be available to people affected by the storm.

Residents make their way through floodwaters in Little Ferry, N.J., on Tuesday.

“This was a devastating storm, maybe the worst that we have ever experienced,” Bloomberg said, adding that schools would remained closed Wednesday.

The historic storm, which made landfall at 6:45 p.m. ET Monday, hurled a wall of water up to 13 feet high at the Northeast coast. It surged into Lower Manhattan and areas of Brooklyn, submerging entire streets and parks. A record tide of 13.88 feet was set at The Battery in Lower Manhattan on Monday night, breaking the previous record of 11.2 feet in 1821.